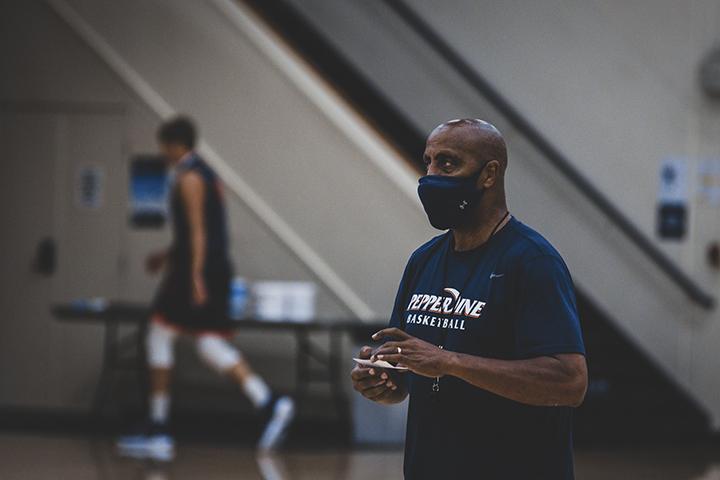 Head Coach Lorenzo Romar intently watches a bubble practice in Firestone Fieldhouse on Oct. 22. Romar and his staff needed to conduct most of their offseason training virtually due to the COVID-19 pandemic. Photo courtesy of Ricky Davis, Pepperdine Athletics

After the onset of the COVID-19 pandemic robbed them of the chance to play postseason basketball for the first time in four years, Pepperdine Men’s Basketball is poised to return to those heights and beyond.

The Waves return two players who won All-WCC awards last season in senior Colbey Ross, a two-time First Team selection, and junior Kessler Edwards, who made the second team in the 2019-2020 season, which Head Coach Lorenzo Romar said will be a huge benefit to this year’s team.

“Now we have guys who are juniors and seniors that have been through it and are talented,” Romar said. “They’re surrounded by guys who are older, have been in our system for more than one year, [and] understand our philosophy. Hopefully, that will pay dividends for us.”

Pepperdine will welcome back a host of other contributors, including Sedrick Altman, who made last year’s WCC All-Freshman Team, Darryl Polk, Jr. and Victor Ohia Obioha.

The Waves hope for a return to form from guards Jade Smith and Andre Ball, who were injured last season and utilized medical redshirts.

The Waves lost only one player, longtime forward Kameron Edwards, to graduation. Forward Keith Smith and center Jackson Stormo both transferred away from Pepperdine. Sharpshooter Skylar Chavez chose to opt out due to COVID-19 concerns and won’t be suiting up this season.

With a lot of minutes in the bigs rotation up for grabs, Romar said he hopes to replace Edwards with a variety of players.

Romar said that Kene Chukwuka, a 6-foot-9-inch graduate transfer from the University of Pittsburgh, freshman Kendall Munson, a three-star forward from Seattle powerhouse Garfield High School and sophomore Jan Zidek would be candidates to play minutes in the post.

Zidek said he was excited to get back on the court but had received no assurances about his role.

“At the end, it’s the players who decide who plays,” Zidek said. “How you practice determines how many minutes you get.”

Regardless, Zidek said his familiarity with the program would be an advantage for him.

“I understand our philosophy more,” Zidek said. “I got even stronger during the summer, I’m growing, and I’m working on my game. I think I have a big opportunity to get a lot of minutes and help the team.”

With not many roster spots opening up, Pepperdine only made one addition to the roster aside from Chukwuka and Munson — forward Robbie Heath, who led NCAA Division II in scoring last season. At this time, due to NCAA transfer rules, Heath is not eligible this year, but Romar said the team is applying for an exemption waiver so Heath can play without sitting out a year.

Pepperdine ranks fourth in the preseason WCC Coaches Poll, trailing only perennial powers Gonzaga, Brigham Young and Saint Mary’s. Ross and Edwards both made the 10-player preseason first team. The Waves were the only program to place multiple players on the team aside from Gonzaga, who was No. 2 in the nation when last season stopped.

Ross said playing in the WCC, which cumulatively went 10-7 against Pac-12 opponents last year, means there are no easy nights.

“Time in and time out, you’ve gotta bring it,” Ross said. “The WCC is no league where you can take a game off because every team is going to give you a game.”

At this time, the only games on the schedule are the normal 16-game conference slate that the WCC announced Oct. 8. The Waves hope to independently arrange some non-conference games, but nothing is officially set up.

“Unfortunately, it’s still in the process of being put together,” wrote Assistant Director of Athletics Roger Horne in an email.

Zidek said the uncertainty in the schedule is difficult.

“We don’t know if anything is happening or not, so you just have to live with whatever’s happening right now,” Zidek said.

Last year, preseason polls also picked Pepperdine to finish fourth, but the Waves ended up in sixth place. Ross said this time around, the team will benefit from its experience.

“Now we’re a veteran team,” Ross said. “Our guys, as a team and individually, understand how to win.”

Any success the Waves have is likely to come with Ross at the center of it. Aside from being named to the all-conference preseason team, Ross was one of 15 names Andy Katz, a writer for NCAA.com, for the Bob Cousy Award watchlist for the best college point guard in the country.

Romar said that Ross consistently proves himself against top competition, citing Ross’s 38-point performance against USC and games against other Power 5 schools.

“He’s as good as any point guard in the country, no doubt about it,” Romar said.

It’s shaping up to be another historic season for Ross, who became the program’s all-time assist leader late last season. Ross enters his senior season just 23 points behind Stacy Davis for the program’s all-time scoring record, and 10 made free throws away from becoming the all-time leader in that department. If Ross can maintain his current career averages of assists per game (6.6) and free-throw percentage (.847), those would also be program records.

As he begins to evaluate his legacy at Pepperdine, Ross said he wants the Pepperdine community to remember him as a winner. Ross’s goal remains to take Pepperdine to the NCAA Tournament for the first time since 2002. But he also said he wanted his off-court presence to mirror or surpass his contributions on court.

“I want to be remembered as a great leader — a servant leader,” Ross said. “Someone who if guys need anything, they can reach out to me and I’m there. Something we focused on this summer is making it less about ‘me’ and more about ‘we’, and I think that’s so important for the team aspect.”

Some of the inspiration for Ross’ mentality came from previous generations of Waves, like Davis, former assists leader Jeremy Major and current graduate assistant Amadi Udenyi, who Ross said are “big brothers” for him.

“They give me advice, they give me confidence and they help me learn the game,” Ross said.

Pending the probable addition of some sort of non-conference season, the Waves are scheduled to open the season Dec. 31 against BYU in Malibu. The team hopes to play a full schedule, but Romar said he knows that’s far from a guarantee.

“If one kid on any team tests positive, both teams have to be quarantined for two weeks,” Romar said. “That’s different. That’s something we haven’t practiced or experienced, so those potential situations are the ones that could make things a lot more interesting.”