Photos by Makena Huey and Rowan Toke | The Healing Garden in Thousand Oaks serves as a permanent memorial to honor the victims and survivors of the Borderline Shooting.

One year after the Nov. 7, 2018 Borderline Shooting — which resulted in the death of 12 individuals, including first-year Pepperdine student Alaina Housley — the Thousand Oaks community continues to heal. The Healing Garden memorial opening in Conejo Creek North Park is intended to support the community in its recovery.

To generate a safe space to remember the victims and honor the survivors, officials from the City of Thousand Oaks, the Conejo Recreation and Park District and the Ventura County Sheriff’s Office came together to create the Lakeside Pavillion garden. The three city agents hosted the official dedication ceremony for the garden, located at 1379 E Janss Road in Thousand Oaks, on Nov. 7 in commemoration of the one year anniversary of the shooting. 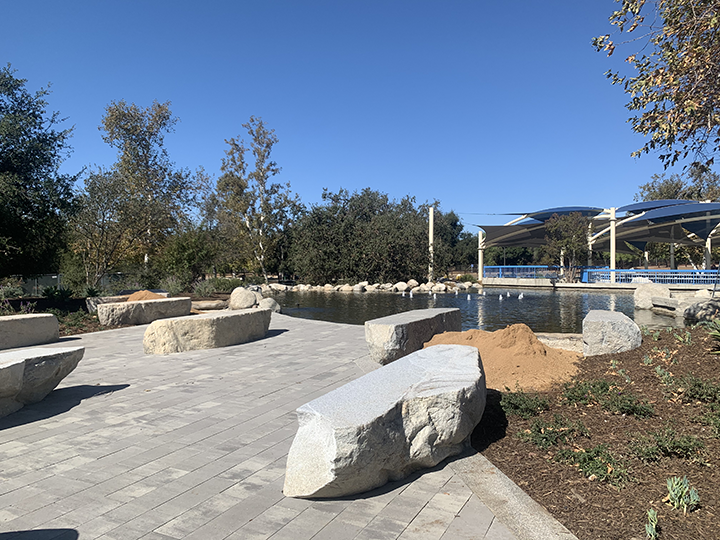 Jim Friedl, general manager of Conejo Recreation and Park District, said he, along with the city representatives and sheriff’s department, decided that this park would be ideal because of its public land and popular location. Most important, it made their goal of completing construction in time for the one-year anniversary attainable.

Friedl said Andrew Mooney, the senior park planner for Conejo Recreation and a landscape architect, researched the memorials of other communities affected by mass shootings before designing the garden.

The three city agencies chose to name the memorial a Healing Garden to convey its purpose as a place for reflection, solace and hope, Friedl said. He encourages anyone struggling to overcome the tragedy to take advantage of the new garden.

“It’s going to be a special place — a place where people really pause and think about those we have lost and the hardships of the people who have survived,” Councilmember Bob Engler said.

Engler said the Healing Garden will be “a peaceful park where people can come and reflect on what happened.”

In addition to memorializing those who died, it will also recognize those who survived and are now facing the difficult task of moving forward; each detail in the garden revolves around everyone whom the shooting affected.

The garden features 12 large granite benches to honor each of the victims, while the walkway is paved with 248 stones — one for each survivor. Engler said the lake, which is home to turtles, koi fish and ducks, has 12 fountain jets to represent each of the victims. 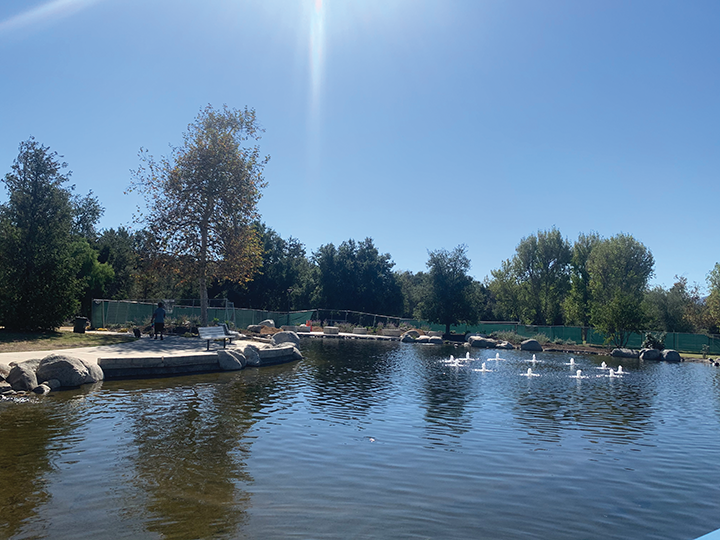 “I’m looking forward to this week of memorial because it shows how we pulled together in that moment during Borderline and then the next day when the fire came through,” Engler said. “It’s a lesson for us all to remember that we can count on each other, so I hope that’s something the memorial can bring together.”

Thousand Oaks Mayor Rob McCoy told the Thousand Oaks Acorn that because the Woolsey Fire prevented individuals from grieving immediately after the shooting, this memorial serves as an opportunity for the community to grieve together one year later.

Friedl said he has never before been part of a deeper wound in his community.

“I haven’t seen pain and anguish like I have over the initial months,” Friedl said. “I also haven’t seen the kind of generosity and willingness to help.”

Friedl said the city had so many offers of help that they were not able to accept them all. Thousand Oaks residents provided $250,000 in donations from community members.

“The community is exceptionally interested in the care and well being of the survivors and victims’ families and our first responders,” Friedl said.

Thousand Oaks resident Jath Niel Andrade is a staff member at the Conejo Goebel Adult Community Center, where he was working the day of the Borderline Shooting. He said officials used the center as a gathering location to notify families of the status of their loved ones.

“As someone who worked here during the shooting, to see the families and how the community came together pretty quickly to help them out and to provide resources for the families was really important,” Andrade said.

Andrade said he sees other communities that are affected by shootings struggle to recover and appreciates that the Thousand Oaks officials focused on making the memorial a priority.

“I just think it’s great that even something like Parks and Recreation can come together with the city and just be there for the community,” Andrade said.

Thousand Oaks community members and leaders emphasized the unexpected nature of the shooting.

“We’ve prided ourselves on being the safest city in the country,” Engler said. “Most of us, when [the shooting] occurred, thought if it can happen here, it can happen anywhere. Most of us thought we could avoid that sort of thing, but that’s not possible.”

Friedl said the city is more vigilant than before and must now balance this need for safety with the desire to remain a free, welcoming community.

“I never thought it would happen here — that’s such a cliche, but it is true,” Friedl said.

Friedl said the community still has “a ways to go” in terms of healing, and although everyone’s process is different, there is no alternative.

Engler said he wants people to know that the city still stands strong and that he empathizes with those who were even more impacted by the events of November.

Borderline Bar and Grill, located at 99 Rolling Oaks Drive, is fenced off from the nearby shopping center, only leaving a small memorial exposed. The memorial includes handmade offerings, such as photos of each victim, along with flowers, cards and stuffed animals.

The location first opened in Malibu in the late ’80s and moved to Thousand Oaks in 1993.

“With over 2,500 square feet of wide open dance floor, Borderline has provided a haven for country line dancing folks of all ages,” according to its website.

Engler said he does not know if Brian Hynes, the co-owner of Borderline, will reopen or relocate.

“He personally knew a lot of people there that night and several of them were killed,” Engler aid. “He lost his business and friends.”

Engler said those who were not present at the time of the shooting do not fully understand its impact on the community or the various layers associated with the trauma, especially regarding its impact on the Borderline owners and staff.

Hynes has organized the inaugural Borderline Strong Party in the Park from 11 a.m. to 5 p.m., Saturday, Nov. 9, at the memorial, according to the bar’s website. It will feature live music, line dancing and food trucks for all ages.

“The city, the park district and the sheriff’s department are really trying to convey that we haven’t forgotten,” Friedl said. “We have your back, and let’s continue to heal as a community.”