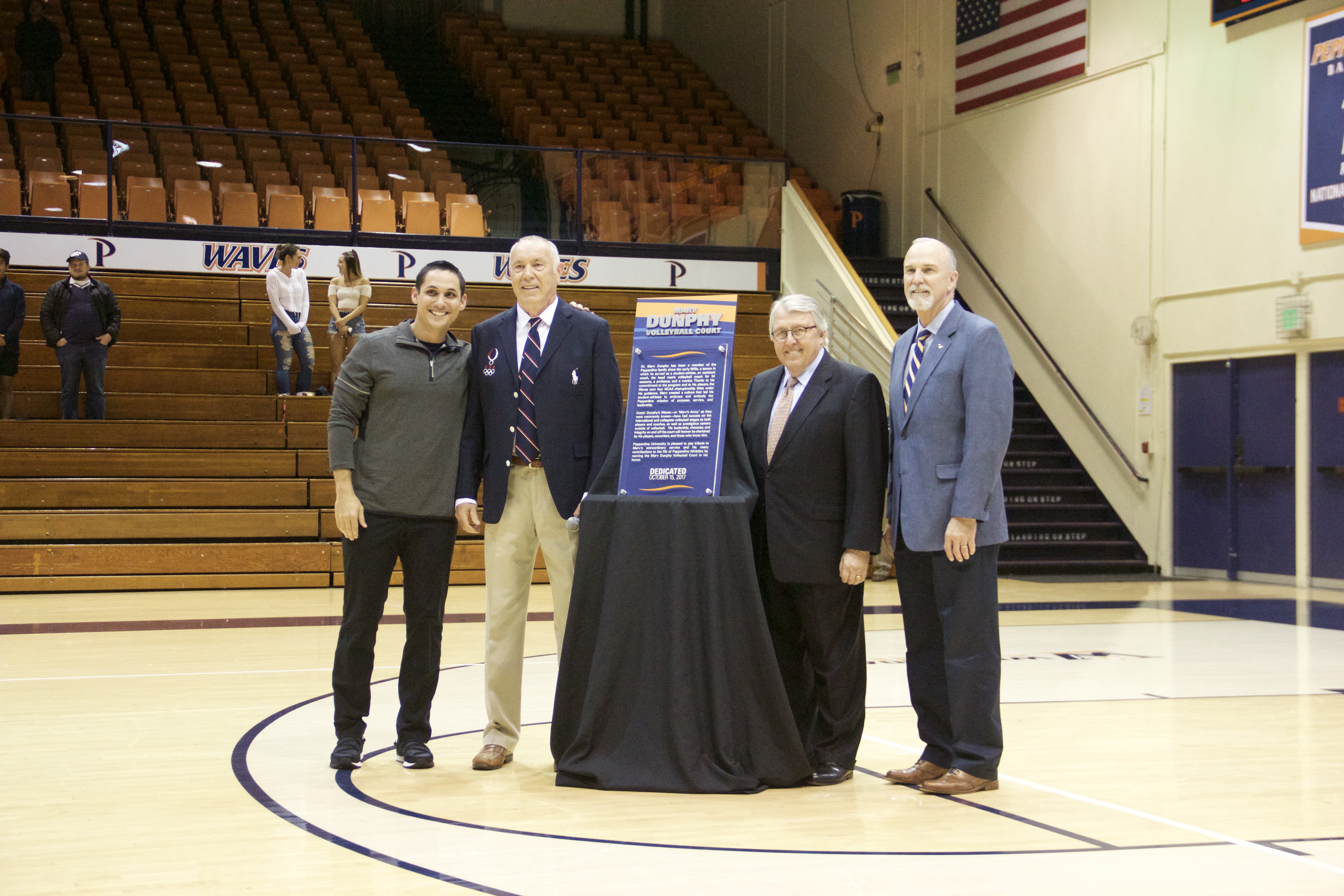 For 34 years, the Pepperdine Men’s Volleyball program saw one man roam up and down the sidelines of the court in Firestone Fieldhouse, talking to the players and preaching out messages and life sayings known as “Marvisms.”

Even though Marv Dunphy is no longer the head coach of Pepperdine Men’s Volleyball, his stamp on the program will always be remembered in Firestone Fieldhouse. The Marv Dunphy Volleyball Court was dedicated to Dunphy himself in a special pregame ceremony prior to Pepperdine’s match against UCSB on Saturday, Jan. 20.

“It’s a nice honor and as I said that evening, the athletic leadership and university leadership has been great,” Dunphy said. “But the players and coaches that I’ve worked for, all the great ones, made this honor possible and that’s my takeaway from the night.”

New faces arrive every season. But for the first time in a long time, a new, yet familiar face will continue the storied legacy that Dunphy helped create. Three games into the new season, David Hunt, who worked under Dunphy for 10 years as an assistant coach, is ready to lead the Waves in #TheHunt.

“David Hunt is one of the best young coaches in our sport,” Dunphy praised. “I’m pretty excited about this season and this group and the kids that are coming in. The program is in good shape, and I look forward to this year and the coming years.”

Although he announced his retirement back in June 2017, Dunphy continues to stay involved with the game of volleyball by serving as the Head Coach Emeritus of the program. And while his title has changed slightly, Dunphy said there has not been much of a difference with his new role.

“Not too much has changed, but I think they’re going to be on the road to Washington this Thursday to play in a game this weekend and I’ll be looking around and saying they’re going to war without me,” Dunphy said. “So far, the matches have been here [in Malibu]. But once they get on the road and I’m not with them, it’s gonna change since my heart is with them.”

As the new Head Coach of the men’s volleyball team, Hunt talked about his relationship with Dunphy and how big it is for the program, the players and the coaching staff to have him around.

Dunphy recalled the moment he decided to hang up the clipboard following the 2017 season, expressing his contentment with the decision.

“Sometime after the season, when it was time to look forward, I said it’s time,” Dunphy shared. “It’s time that somebody else takes this job for the next 40 years.”

Dunphy also recalled chatting with President Andrew K. Benton about his decision over a lunch meeting in Dunphy’s office in Firestone Fieldhouse.

“We were having lunch together and I said ‘Andy, it’s time,'” Dunphy said. “There’s nothing else around that. Pepperdine will always be in my blood.”

Way before his head coaching career began, Dunphy got into volleyball late in his youth as a student and credits a trip to Japan as the spark that made him fall in love with the game.

“It was only after I went to Japan as an exchange student and I saw it being played at a high level,” Dunphy said. “All of a sudden, it happened for me and I really grew to admire the beauty of the game.”

Dunphy didn’t begin his coaching career in volleyball. His first experience with coaching was teaching young kids how to swim, but once he upon developing a passion for volleyball, he knew he wanted to get more involved with the game.

“Initially, I got my Water Safety Instructor [certification] and I was teaching young kids how to swim,” Dunphy said. “That went pretty well and I said ‘Hey, this is something,’ and it kind of evolved. I think the teaching and coaching stuff was there, but I didn’t know I was going to be involved in volleyball as a coach.”

Dunphy credits his early growth as a coach learning and studying from many of the game’s best.

“If you have the opportunity to be in the presence of greatness, you take it,” Dunphy said. “I think I was able to play for a couple really great coaches and then I got to know some really great people in our sport early on.”

One of biggest lessons that has resonated with him was from former Pepperdine Men’s Volleyball Head Coach Edward “Burt” DeGroot.

“I think you have to be in the ballpark with talent for sure and you have to have a pretty high degree of character and toughness because you’re always going to be in situations where things are not going to be perfect and you have to overcome those scenarios,” Dunphy said. “You don’t go too far without that character and I think from a coaching standpoint, you get what you tolerate and I got that early and often from Edward ‘Burt’ DeGroot.”

Outside of DeGroot, the biggest influence on Dunphy’s coaching philosophy was John Wooden: the famous UCLA basketball coach Dunphy wrote about for the doctorate dissertation he earned at Brigham Young University.

“When I first started coaching, I tried to be Marv Wooden and I said ‘I’ll learn from him, I’ll borrow from him, but I have to be myself,'” Dunphy said. “I learned that pretty early on and as we’re going here, I think the best coaches are authentic, they’re real. Players know when you’re real and when you care.”

Reflecting on his time with Pepperdine, Dunphy says there are many memories that will stick with him, most notably the relationships he established with his players and members of his coaching staff.

“I think the best thing about coaching is I got to choose the people that I’m going through life with,” Dunphy said. “I’ll talk to them ongoing and their joys are my joys and their disappointments are my disappointments. I’m so proud of all of them and I let them know that. I stay in contact so I have this extended family and they feel like, a part of it and I feel a part of their lives.”

For the full interview with Marv Dunphy, follow our GPod Podcast Network on SoundCloud.