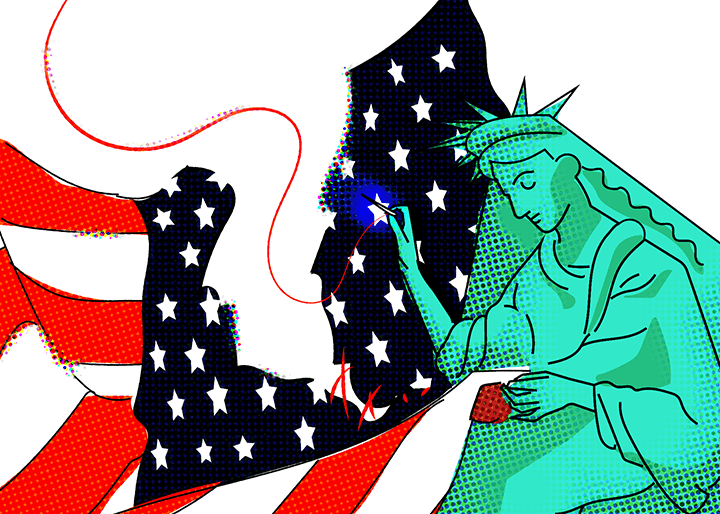 In Abraham Lincoln’s 1858 “House Divided” speech, he declared these famous words: “A house divided against itself cannot stand.”

His quote continues to serve as a rallying cry for unity within a nation fractured by social unrest.

While unity in itself is a beautiful and necessary concept in any democracy, it cannot be achieved without adherence from divided sides. The insurrection at the Capitol that took place Jan. 6 was a stark and alarming reminder of the consequences division can bring and how fragile the democratic process is.

Most Americans — about 89% — agree that having civil political discourse is necessary to begin the work of healing the country, according to a 2019 report published by research firm Weber Shandwick. But in times of increased polarization, how does this process begin?

In order to heal, Americans need to acknowledge present realities, understand how social media can be polarizing, respectfully listen to opposing views, speak with empathy and address institutionalized injustices.

One of the most meaningful ways Americans can acknowledge the nation’s present political reality is by fully accepting Biden’s presidential win, which both Democrats and Republicans confirmed. Despite this, three in four Republicans believe Biden won illegitimately. When Americans cannot even agree on the legitimacy of the president, it becomes extremely challenging to make any sort of movement toward unification.

In addition to acknowledging present political realities, Americans need to reflect on the polarizing nature of social media. Because of America’s growing reliance on technology, apps like Facebook, TikTok and Instagram have become news sources for many. About 1 in 5 American adults receive their news from social media, according to Pew Research Center.

This contributes to divisions because apps like these develop an algorithm fine-tuned to a person’s interests, which can lead to people being extremely biased against views that don’t look like their own. Counterculture groups like QAnon rely on polarization to keep members believing its conspiracies. To counteract this, Americans need to get news from unbiased sources. Refer to charts like these to check how biased a news source is. Some examples of unbiased sources are The Associated Press, Reuters and BBC, according to this comprehensive chart of news sources and political leanings.

To deeply understand people with different views, Americans need to engage in uncomfortable yet necessary political conversations. As a country, America must commit to seeing, listening and learning things from another point of view.

This doesn’t mean validating views of bigotry, homophobia or sexism, but rather embracing people who see political issues in different ways.

These don’t have to be formal conversations but can be open forums between friends. Instead of avoiding the topic of politics entirely, Americans should ask the questions, “Why do you believe that? How did you come to that interpretation?”

It’s important to start these discussions without judgment or trying to convince anyone a certain view is “right”— work on practicing uninterrupted listening.

After doing this, it’s easier to understand that the other side is uniquely human, with different views that represent the way they see the world. Even though it’s easy to fall into the trap of making generalizations, talking to people on a personal level helps to remove internal biases.

Being able to listen with empathy — the ability to understand and share the feelings of someone else — is also necessary in these conversations. Empathy will lead the American people to a deeply needed examination of the moral character of the nation.

Finally, Americans need to acknowledge the institutionalized injustices in this country. The devastating murders of numerous Black citizens, separation of innocent children from their parents at the border and increasing hate crimes against Asian Americans are all areas that must be addressed.

It may seem easier to pretend that these issues don’t exist within the ideal of America’s perfection and deeply rooted patriotism, but true patriotism means recognizing where your country is flawed and working to make it better.

The only way Americans can accomplish this is by listening to each other and working together to heal the nationwide fragmentation these injustices cause.

We, the people, have an incredible opportunity during these “unprecedented times.” We can either choose to come together and bond over our shared commitment to making America great for all people or we will be destroyed by our inability to work together. The choice is in our hands — what will we choose?