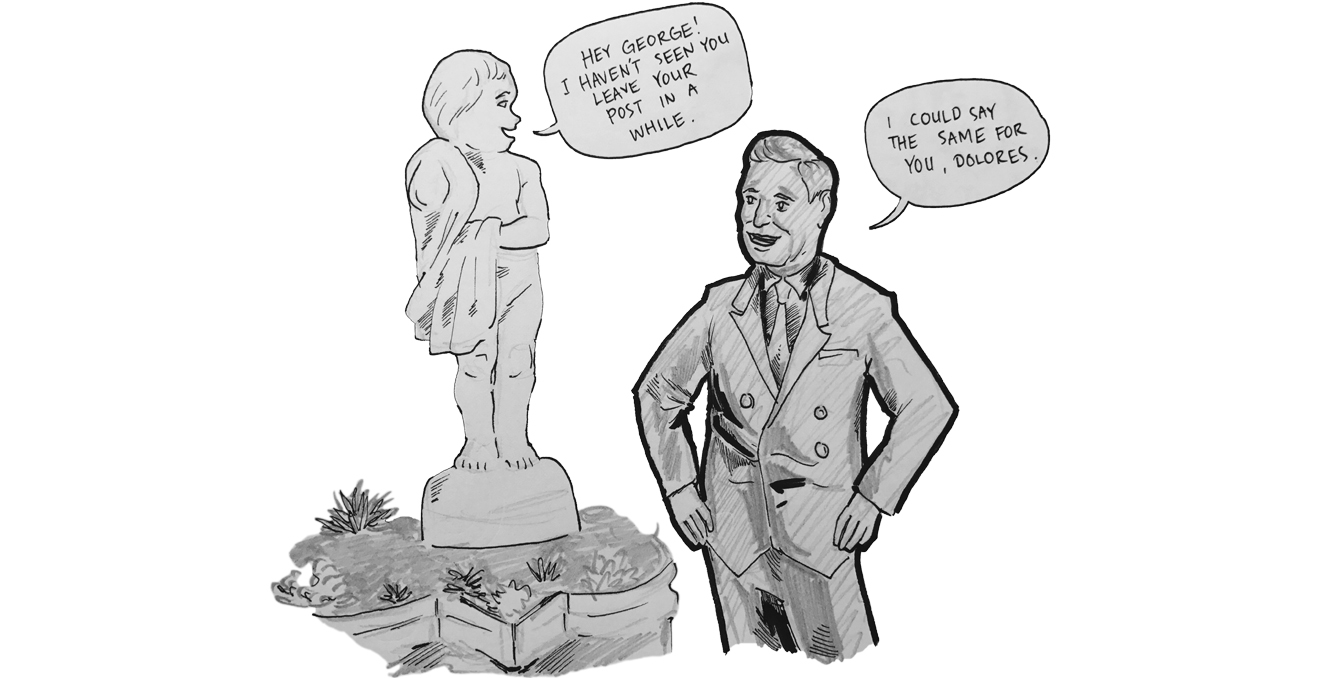 Walking into a museum exhibit, the layout is intentionally designed so that the eye gets drawn to either the biggest piece or the most important piece. Often, they are the same thing. Museum curators plot their exhibits around an idea or a person they consider to be the most important takeaway for visitors to the museum.

In some ways, college campuses are similar. The campus reflects what is most important to the school. The students are the curators.

This is a campus for the students, and students have significant power to challenge and investigate what surrounds them. In order to use that power, they must first pay attention.

By taking what surrounds them and questioning the meanings of different things on campus, students can develop an appreciation for all that is represented here, or what they feel is lacking.

This year’s Founder’s Day theme was “Spirited Inquiry,” and Waves should take that to heart daily while walking through campus. Living an active and curious life is part of the equation in human progress and innovation. Asking for information and searching for answers is an essential part of college, and that doesn’t stop when classes are done for the day. Each day is an opportunity to reflect upon the environment around Pepperdine, the structures which stand to represent the school and the meanings behind the works of art that dot the campus.

How does one reflect upon the art? Look, see and think. “Any process of understanding art, then, is about slowing down that process, breaking down the image deliberately and holding off from jumping to any snap conclusions until later,” according to Kit Messham-Muir’s article, “Three simple steps to understand art: look, see, think,” published on the Conversationalist on Oct. 22, 2014. Messham-Muir encourages views of art to slow down, observe and reflect upon the piece and question what it represents. Students can do this simply by observing places around campus.

Take the entrance to Pepperdine. The Phillips Theme Tower is the tallest structure on campus and can be seen all the way from PCH. It symbolizes the Christian ideals of the university set in place by George Pepperdine himself.

Pride in America’s ability to persevere can be added to this list of important meanings. Heroes Garden serves as the highest point on campus, commemorating the lives lost in the Sept. 11, terrorist attacks, and each year Alumni Park is host to almost 3,000 flags to represent those lives.

Dolores is another compelling symbol. Dolores originally became a part of the George Pepperdine College campus in Los Angeles in 1941. Moved to the Malibu campus in 1982, Dolores was stolen in the late 1980s and did not return to campus until the university’s 75th anniversary. In her own way, she is nearly a legend to Pepperdine students, past and present, and a reminder that life can sometimes be a bit strange but to embrace the strangeness anyway.

Things can change. An elephant in the room, since removed, is one Christopher Columbus. The statue of Columbus that used to be outside the PLC was removed last year amid controversy. Student critiques of the statue led to its removal, and students shone a light on the subject which had not been previously addressed.

Student critiques matter, as do what they choose to represent their education and their legacies.

Reflect upon the way in which artwork around campus represents the campus, and encourage others to do so. Visit the Weismann to see works of art which lay bare the inner machinations of each artists’ soul. Observe the many art pieces within the newly renovated Payson Library and think on what they all mean, the importance which they bear.

For example, how many were aware there was an instance of racial police brutality at the former Pepperdine Campus? Larry Donnell‘s portrait now hangs in the foyer of the library in memoriam, after he was shot and killed on campus in 1969 by a Pepperdine DPS officer. How many students walk by his photo and never question his story?

Never stop inquiring, and appreciate the art for all that it does.

Seeking answers and thinking past the physical work of art standing on campus can help shape this school for future Waves. Dolores, George and even the mountain lion next to Smothers Theatre all combine into a legacy that will be left behind long after graduation. What will these students leave behind and what will be placed in a position of importance? Pepperdine is comprised of values, some of which have changed throughout the years. It is up to the students to look around and decide which of those values to display in the museum that is this campus.