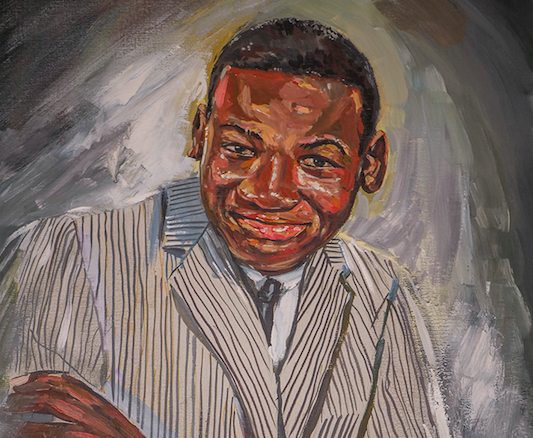 The rededication ceremony of the portrait featuring 15-year-old Larry Donnell Kimmons in Payson Library brought together Pepperdine students frnd faculty of the past and present, to critically remember the young life lost. The event was held on Founder’s Day.

The event came, “as other young black males are murdered by the force of racial apartheid,” Catherine Meeks, class of 1970, wrote in a statement read at the ceremony by senior Darylynn Horton.

Kimmons was a young African American high school honors student who lived near the George Pepperdine College campus in South LA. He was shot and killed by Pepperdine DPS Officer Charlie Lane on March 12, 1969.

Those who knew Kimmons, described him as “beloved” by the community, a hard worker and a talented junior varsity basketball captain, David Humphrey, associate dean of Student Affairs for Diversity and Inclusion, said.

It was Kimmons’ love of basketball that brought him to the George Pepperdine College campus where his mother had received permission for him and his friends to use the basketball facility for a friendly game. But in the matter of “a few seconds,” Lane “pumped” his shotgun from 14 inches away and shot Kimmons in the chest, killing him right in front of Marilyn Hall, a women’s dormitory on the old college campus, according to the Coroner’s Inquest.

Kimmons’ death reignited racial tensions on the campus and in the surrounding area.

Rod Wright, class of 1973 at George Pepperdine College, said he lived three blocks from Kimmons and usually went with him to play a game of basketball on the campus. On the night of the shooting, he had to skip the game. Wright said he and his friends’ reactions to Kimmons’ death was “getting Charlie,” as revenge. They were stopped by Calvin Bowers, a 1960 alumnus of the college, who was praying near the school. Bowers did not work for Pepperdine at the time, but would go on to become the school’s first African American dean.

Police were called when some of the African American students protested Kimmons’ killing. Caucasian students fled the campus in fear, Pastor Cookye William-Rutledge, class of 1970, George Pepperdine College, wrote in a statement for the ceremony that was read by senior Bria Dunlap.

Candace Jones-Mitchell, alumna of Seaver College and former professor, focused her master’s thesis on the move of Pepperdine to the Malibu campus, also known as the “white flight.” Jones said the memorial service was a reminder that progress is progress and that “Pepperdine has come full circle.”

Associate Chaplin Eric Wilson said the portrait of Kimmons “reminds us of when we did wrong; reminding us to fight to get it right.”

As Benton closed the service, he reminded the attendees that “Pepperdine is not perfect, we have sinned,” but it was evident that Pepperdine’s goal is to “advance the work of justice” by upholding the promise made long ago.

At the time of the rededication ceremony, the Kimmons portrait did not have a plaque. Benton said he found the previous plaque required more information and needed to capture Kimmons’ story. Before ending the rededication in prayer, Benton reminded the community that “Christ will not fail,” and “we’re not done.”