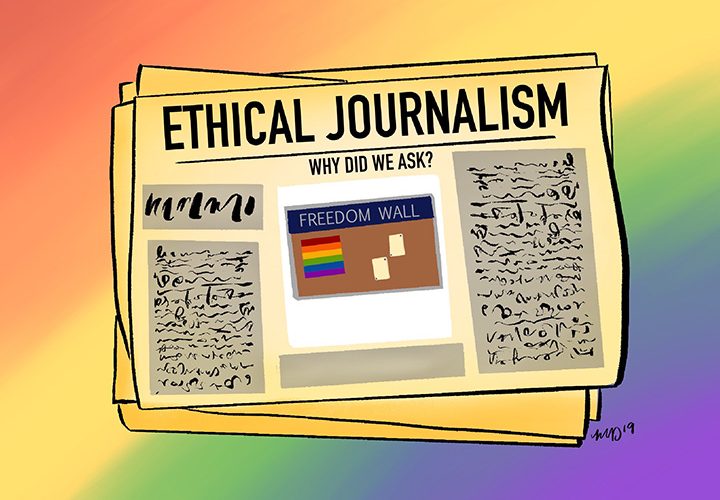 The Student Government Association (SGA) passed a resolution Wednesday, Oct. 23 denouncing hate speech on campus in reaction to a homophobic message anonymously left on the Freedom Wall on top of the anti-Chick-fil-A message.

After SGA took down the homophobic message, replaced it with an LGBTQ+ flag and officially passed the resolution, the same anonymous student took down the flag and put up another message denouncing sodomy in its place. The Graphic posted flyers on the Freedom Wall, Twitter and Instagram in an effort to reach out to the student for comment. The flyers had two photos of the message the anonymous student posted and the Graphic’s email address for the student to contact.

Although the Graphic staff knew posting these flyers would cause a reaction from the student body, it was standard journalism protocol to cover all sides of a story. Since the Graphic upholds the highest standards of ethical journalism, the writers were obligated to reach out to the anonymous person to find out all the facts. This was not giving the student a platform, but covering a story.

According to the American Press Association, the first principle of journalism is an obligation to tell the truth.

“The ‘journalistic truth’ is a process that begins with the professional discipline of assembling and verifying facts,” according to the American Press Association website.

By posting the message on the freedom wall, our reporters were trying to gather and verify all the facts. Getting the facts right is the cardinal principle of journalism, according to the Ethical Journalism Network.

Similarly, journalism is only as good as the information given to the journalists from their sources, according to the Ethical Journalism Network. All major newspapers follow these practices.

The anonymous student was a critical aspect of an issue that SGA responded to with the resolution denouncing hate speech and homophobia. As journalists, we hold responsibility to reach out to the person in question. In doing so, we were doing our due diligence to not ignore a viewpoint.

If SGA were to pass a resolution in response to an action President Jim Gash does, for example, we would have to reach out to him for comment.

At the same time, the Society of Professional Journalists includes the responsibility to minimize harm in its code of ethics.

In reaching out to the anonymous student, we aimed to minimize harm by reporting both viewpoints and gave the individual a chance to respond. We did this by putting posters up for fewer than 36 hours. We chose to take them down as soon as possible to avoid provoking the issue any further. As soon as we received an email response, we took the flyers down.

Finally, the article necessitated comment from various sources, though onlookers only saw us reaching out to one. Other sources that we reached out to include Crossroads, SGA, students and Admissions. Because the source was anonymous, the only way for us to contact the student was through public means of communication.

However, the anonymous student was just one of many sources whose viewpoints and actions we are covering for this story.

We encourage anyone who is still concerned to reach out and send us a letter to the editor. 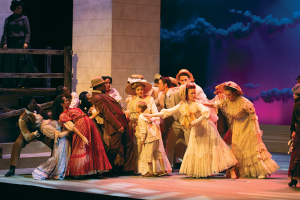 Photos by Alex Neis The characters from Harlem and New Rochelle stand off and interact with each other through dance....
Copyright 2013 Jupiter Premium Magazine Theme
Back to top