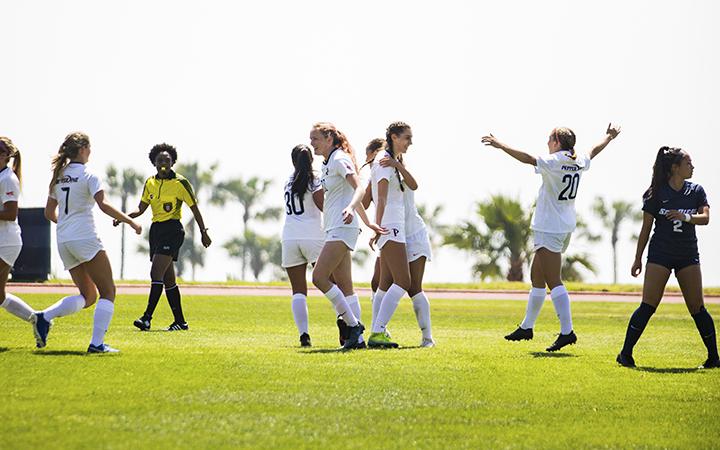 Pepperdine Women’s Soccer put it all together April 3, at Tari Frahm Rokus Field, celebrating its 10 seniors with a big West Coast Conference victory.

The Waves scored five goals in the opening 19 minutes of the match, en route to a 7-0 destruction of the visiting San Diego Toreros to improve their overall record to 6-3-1. The seven goals were the team’s highest scoring total of 2021, and the shutout was its fifth of the season.

“We all came out ready for Senior Day and playing for each other,” senior defender Erin Sinai said. “Right when we stepped on the field, we were really focused on ourselves and focused on the team and that really showed as we played.”

The team’s 10 seniors received flowers from their teammates and coaches pregame, as parents and friends remain unable to attend athletic competitions on Pepperdine’s Malibu campus due to LA County COVID-19 restrictions.

“I love all these girls and I’m just so proud of what we’ve accomplished these past three years,” senior midfielder Joelle Anderson said. “This season too, I just can’t wait to finish the season with this class and just see how far we can go.”

Head Coach Tim Ward said the team planned to honor their seniors in the second-to-last scheduled home game “just in case something crazy happens” with their final home game April 10, against BYU.

“One of the themes for our team this year is leaving the jersey in a better place,” Ward said. “We feel like, no matter what happens in the last two games, this group has done that.”

The seniors made their presence known against the Toreros, collectively contributing four of the Waves’ seven goals and five of the team’s six assists.

Pepperdine controlled the lion’s share of the possession from the opening kickoff, pressing high into San Diego’s half of the pitch. The result was a cascade of early goals.

In the sixth minute, Anderson beat a defender with two touches and unleashed an unassisted blast from the top left corner of the penalty area, hammering it off a bounce with her right foot inside the far post.

Three minutes later, Sinai delivered a long, looping cross to junior forward Leyla McFarland, who held off her defender to thump home a header from the back post to the opposite corner of the net.

“Yesterday at practice, actually, I played a ball just like that, Leyla scored and she said, ‘Let’s do it tomorrow,'” Sinai said. “It really just comes with a lot of preparation and practice.”

Mere seconds later, McFarland was involved in a goal again, this time setting up Anderson.

“I just saw Leyla wide open so I just did a little give-and-go,” Anderson said. “I just slipped by her and just tried to stay calm and composed in that moment. It was just a good team goal.”

Anderson, who was drafted to the National Women’s Soccer League in January, slotted the ball past diving Torero goalkeeper Ellyn Casto with her left foot to make it 3-0 inside ten minutes. The brace marked Anderson’s second and third goals of the season, bringing her career total to 24.

“Jo’s always been a midfielder; she just happens to be one of the best goal-scoring midfielders we’ve ever had,” Ward said. “A lot of the times she’s double teamed, sometimes triple teamed, in the games. For her to get a couple goals and a couple of assists, it was really a fantastic performance.”

Less than two minutes later, another senior scored, this time from the penalty spot. Freshman forward Tori Waldeck earned the penalty after being taken down from behind inside the right edge of the penalty area, and senior defender Emily Sample slid the penalty into the bottom left corner of the net.

In the 19th minute, Waldeck converted to extend the lead to 5-0. Anderson distributed a long pass and a Torero defender swung at the ball and missed. Waldeck then corralled it on a perfectly timed run and got it past an advancing Casto.

San Diego began to possess the ball slightly more after the 20-minute mark, but the Waves defense continued to limit chances. Pepperdine starting goalkeeper Zoe Clevely did not need to make a single save in the first half.

With preseason All-WCC defender Trinity Watson unavailable, the Waves were thin on the back line, but freshman Victoria Romero earned her first start at center back and played well, after fellow freshman CC Maloof manned the position March 27, against LMU.

“We wanted Victoria to have that opportunity as well to play with those seniors, and they both did really, really well, so the future’s bright,” Ward said.

Advancing from the right back position, Sinai distributed several inch-perfect crosses before halftime, but the Waves did not score again before the break. To begin the second half, Sinai and the defense continued to limit San Diego’s runs and chances in front of redshirt sophomore goalkeeper Kinsey Ehmann, who entered the match for Clevely.

“I was honestly super proud of the whole back line, and I think it really shows the depth of our team,” Sinai said.

Sophomore midfielder Shelby Little notched her first goal of the season to make it 6-0 in the 58th minute, releasing a right-footed laser off the bottom of the crossbar on a simple assist from Anderson.

Senior forward Aliyah Satterfield closed the scoring two minutes from the final whistle, taking an assist from fellow senior midfielder Madi Cook, beating two defenders in the penalty box with masterful footwork before finishing with a low shot. Satterfield has scored all three of her career goals in the previous five games.

“Every single one of those women have had a really challenging journey along the way,” Ward said. “Every single one of them faced adversity and struggle. That was our word at the beginning of the week — we talked about the beautiful struggle. It’s a process, life is a struggle sometimes, but at the end of it, you can find joy.”

The match was also a testament to the Waves depth, as 22 different players entered the game.

“Everyone on this team is talented; everyone can play so many different positions,” Anderson said. “I just loved seeing some of the younger players that might not play as many minutes come in and just show what they’re about and just help the team out in any way they can.”

Freshman goalkeeper Ellie Sommers made her collegiate debut in the final 16 minutes of the match, collecting the first two saves of her career.

“As great as those goals were, we’re really grateful for the shutout and for our three goalkeepers,” Ward said. “Sometimes they get overlooked, and our defensive unit is playing great.”

The Waves now turn their attention to their final home game of the season against BYU on April 10, which carries massive WCC and NCAA Tournament implications. The Waves and Cougars enter the match deadlocked with identical 5-1-1 conference records. The Santa Clara Broncos lead the WCC at a 7-0 conference record.

“What people are going see next week are two of the best teams in the country,” Ward said. “I think we’re really good, I think they’re really good, and I think it’s going to be just like the Santa Clara game — that was an amazing soccer game.”

Initially, the Waves and Cougars planned to battle in Malibu again April 12, in a non-conference match, but the coaches of both programs decided to cancel the contest.