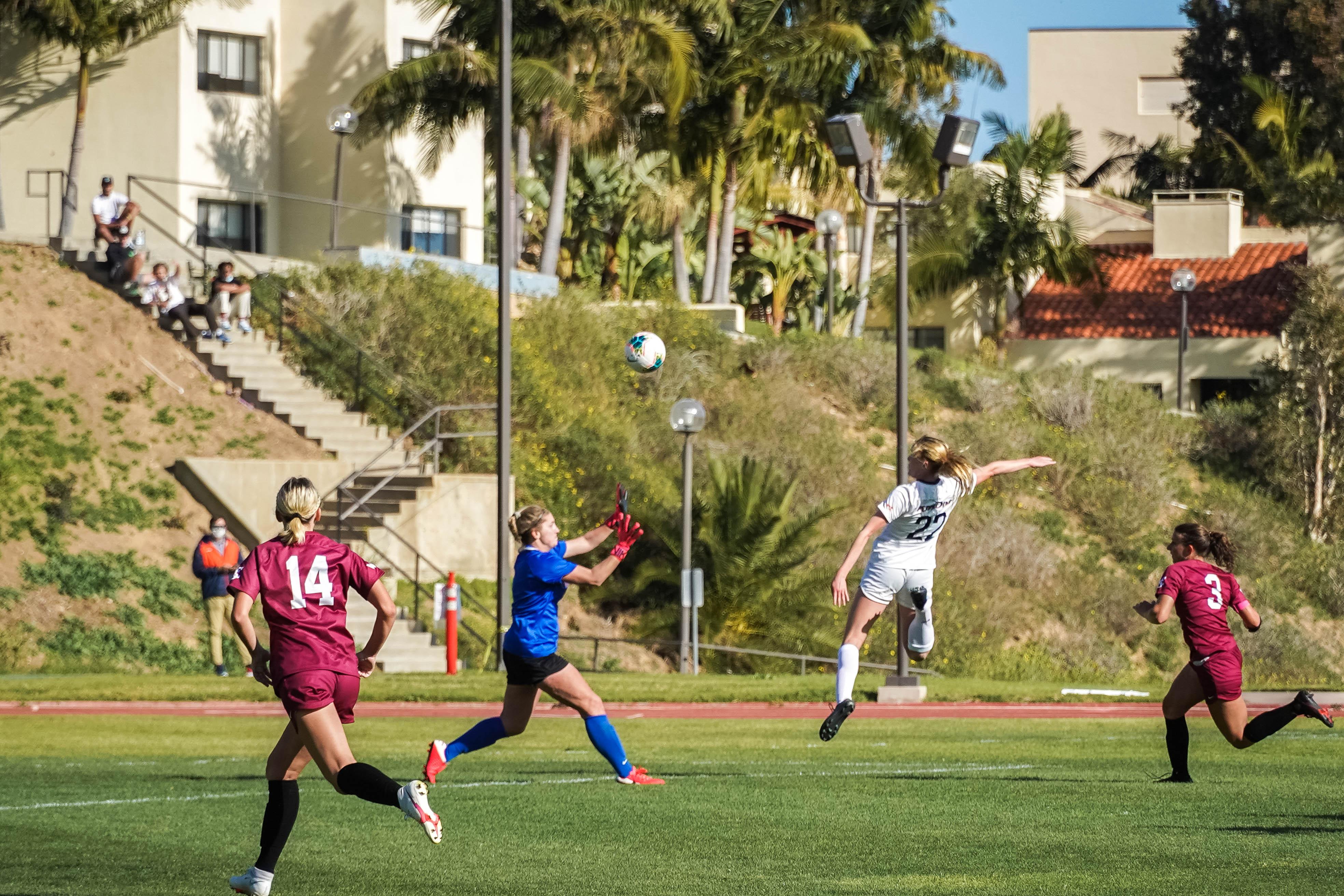 Junior midfielder Leyla McFarland (in white) scores a header against Santa Clara on March 23 at Tari Frahm Rokus Field. McFarland nodded in a cross from Erin Sinai to tie the score at 2-2. Photos by Dane Bruhahn

For the second time in as many years, Pepperdine Women’s Soccer lost a 4-3 heartbreaker to the Santa Clara Broncos. However, aside from the score, the stories of the two games could not be more different.

While last year’s Waves blew a three-goal lead in regulation to a rising Broncos team on the road, this year’s match was a back-and-forth affair between two teams ranked in the national Top 25, and neither team ever led by more than one goal. Kelsey Turnbow‘s finish in the second overtime period, the seventh goal in a game that was scoreless at halftime, gave the Broncos their first win in Malibu since 1999 by a score of 4-3 March 23 in Malibu.

The stakes were high before the match even kicked off. Santa Clara came into the match ranked No. 11 in the latest coaches poll, while Pepperdine came in at No. 24. With incoming conference records of 3-0-1 for the Waves and 3-0 for the Broncos, this was also a matchup of the last two undefeated teams in the WCC, so the conference and national implications were huge.

The two teams also play different formations and styles of soccer, so Ward said he knew the tactical chess battle would be important.

“We play a 4-3-3 the majority of the time, and they play sort of this 4-4-2,” Ward said. “It’s really about imposing your will on the other, and it’s fun, it’s a fun way to play. [Broncos Head Coach] Jerry [Smith], there’s a ton of respect I have for him, and I think he feels the same way about our program. It’s always a great game.”

The teams mostly canceled each other out in a scoreless first half. Santa Clara had the better start, but couldn’t mount a serious threat to Waves goalkeeper Zoe Clevely. Pepperdine tried to build from the back and keep the ball on the ground, but a very high defensive line from Santa Clara did a good job pinning the Waves into their own end early.

Santa Clara’s two NWSL draft picks, Turnbow and Alex Loera, had a strong first half. Turnbow, playing as an inverted winger on the right, sent in several probing passes and looked dangerous trying to cut inside on her left foot. Loera took three shots late in the period, but two sailed well over the bar, and the third went straight into the gloves of Clevely from long range. Loera’s efforts gave the Broncos the shot advantage heading into the break, 6-3.

It didn’t take long for the game to open up in the second half, and in the 52nd minute, the first potential breakthrough occurred. Calista Reyes sent a searching through ball on the ground for Pepperdine that freshman winger Tori Waldeck got her foot to. Waldeck’s touch went past Broncos keeper Marlee Nicolos, but the ball was cleared off the line by left back Emma Reeves.

It was Santa Clara at the other end who opened the scoring in the 66th minute. Build up play from Keren Goor and Julie Doyle eventually squared the ball for sophomore Skylar Smith, who had a neat sliding finish with the outside of her right foot into the corner for her first goal of the year.

It only took one minute for the Waves to answer. Trinity Watson lined up a free kick from 25 yards out and bent it around the wall past a diving Nicolos to even the score. Watson, a former striker converted into an all-conference defender, said she loves taking whatever attacking moments are presented to her.

“I get so excited, just because they don’t come that often,” Watson said. “When we do get those chances, it’s my time to step up, just because I do practice those. Two to three times a week after practice I’ll stay after and kick a few free kicks just for muscle memory, and it helps.”

Five minutes later, it was the Broncos turn to respond. Reigning WCC Freshman of the Year Izzy D’Aquila found herself gifted a one-on-one opportunity when an attempted clearance took a deflection and bounced right to her feet, and she made no mistake beating Clevely.

The pendulum continued to swing in the 76th minute. Pepperdine right back Erin Sinai had space out wide and sent a beautiful cross into Leyla McFarland, who flicked it on with her head into the top corner for a picturesque equalizing goal to make it 2-2.

“It felt so good,” McFarland said. “I turned around and just started running towards Erin because – what a ball she gave me. I was like ‘Oh my goodness, it’s coming right to my head,’ and I heard the goalkeeper try to call for it, and I was like ‘Oh, nope, you’re not getting it.'”

McFarland also played a role in Pepperdine’s third goal, receiving a pass from Skylar Enge and surgically redirecting it first time through the defense towards senior Aliyah Satterfield, hitting her in stride.

Nicolos came off her line, but Satterfield’s first touch allowed her to round the keeper and tap it in to an empty net. It was Satterfield’s second goal of her Pepperdine career, and Ward said he was ecstatic to see Satterfield have that moment.

“She’s an amazing woman of character and maybe hasn’t gotten the minutes that she’s wanted,” Ward said. “There was no one more deserving to score that goal, and she took it so well.”

Once again, a team’s one-goal lead wouldn’t last. Pepperdine gave away a penalty kick after being called for a hand ball inside the box. Clevely, who saved a PK earlier this year at Saint Mary’s, guessed the right way, but Turnbow’s spot kick just eluded her fingertips and the game was level at 3-3 in the 80th minute, capping a staggering run of 6 goals in 15 minutes between the two teams.

“I kinda had a feeling that there’d be some goals on both sides, because I feel like both sides deserved it pretty well,” Watson said. “I didn’t think it would stay 0-0.”

While he credited the Broncos for their play throughout the match, Ward wasn’t thrilled about the penalty kick decision.

“I don’t want to grumble and moan,” Ward said. “But the ref gives a PK, and it’s a shot from a point blank distance into one of our players hands. It’s not an intentional handball. I might eat my words here and I’ll have to watch the replay, but it felt really, really harsh.”

With the score tied, the Waves advanced to sudden-death overtime for the second time in as many games, after playing a full 110 minutes in a scoreless draw against Portland March 19. Waves standout Joelle Anderson had the best chance early in overtime, sending a shot just wide in the 92nd minute.

In the end, it was Turnbow creating a chance out of almost nothing in the 105th minute. After D’Aquila won back possession inside Pepperdine’s half, Turnbow got on the ball and dribbled around three defenders and Clevely, eventually having an open net to tap the ball into. It was the 39th career goal for Turnbow, a three-time all-conference honoree who will be playing for the NWSL’s Chicago Red Stars next year.

“There’s a reason Kelsey Turnbow got drafted already,” Ward said. “She’s a special player who had a special moment, and showed in that moment how quick she is.”

After the loss, McFarland said the Waves were disappointed not to come away with the win, but understood how well the game was played on both sides.

“We could’ve had that game, it could’ve gone either way,” McFarland said. “It was really high-level soccer, both teams had really good moments, and we learned a lot. Really good game, but obviously an unfortunate result for us.”

Pepperdine will have three days of recovery before returning to Tari Frahm Rokus Field to take on local rival LMU Saturday, March 27.