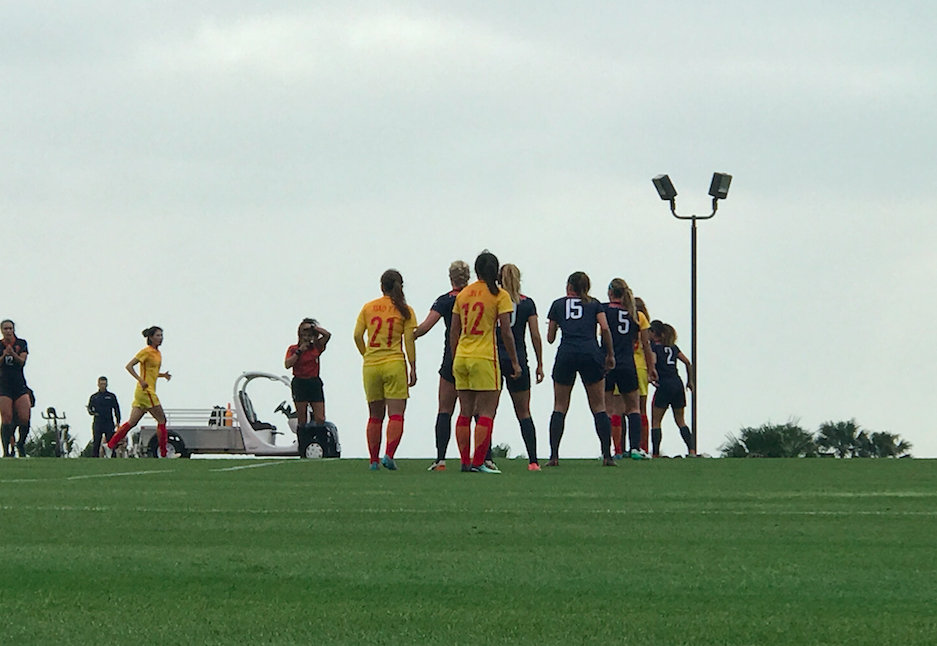 The Pepperdine Women’s Soccer team competed in a friendly match against the Chinese National team on Saturday. The Waves battled the National team for all 90 minutes, but a penalty shot right outside the box gave China the edge, as they beat Pepperdine 2-1.

Junior forward Michelle Maemone notched the only goal for the Waves with the help of freshman forward Brie Welch.

“Getting that early goal was really great.” Maemone said. “It really was such a team goal, and it wouldn’t have made it up to the forward line if we hadn’t done a good job controlling the ball all the way up the field. Brie Welch and I were up there to put the ball in the back of the net but the sequence started way before it got to us.”

The Chinese National Team has been training in the Los Angeles area for three weeks and their game against Pepperdine was the last of their feats in their trip to the United States. On Friday, before their match against the Waves, China beat UCLA 4-0.

Head Coach Tim Ward said having the opportunity to face the Chinese National team was special.

“We feel blessed to have Team China train here the last two weeks,” Ward said. “For our girls, it’s a really unique experience. We’ve scrimmaged in the past against some U.S. teams, but they weren’t the full national teams. To have that team on our campus, on our field, it was really exciting.”

The match drew a crowd on both sides with lots of chants and cheers throughout the heated 90-minute match. In addition to their game against China, the Waves hosted an alumni game to celebrate the 25th year of the program and the success of many seasons past.

The Waves got off to a quick start with Maemone’s goal coming within the first 10 minutes of play. The Chinese National team tied the game 1-1 with a penalty shot from the right side outside the box before the half.

The Waves stayed tough, but the Chinese National team slid in another goal early in the second half. Pepperdine had some great looks into the final minutes, but couldn’t seem to find the back of the net.

“We knew that this game was going to be one of the toughest we have played,” Maemone said. “In response to that, we were asked to battle hard and to not back down from challenges out of fear of getting beaten.”

Following the match against the Chinese National team the Waves celebrated their 25th season and the many successes that have resulted, with the alumni game.

Pepperdine Women’s soccer has won four West Coast Conference titles including the 2017 season title. They have also advanced to the NCAA Championships 10 times and posted winning records in 19 seasons. This past fall, the Waves experienced one of their best seasons in program history, finishing with a No. 16 national ranking and a 15-3-3 overall record.

The Waves will continue to train throughout the spring semester and into the summer in preparation for the 2018 fall season.

On the team strategy heading into the game against Team China: “I think that the coaching staff as well as the team really viewed this game as an amazing opportunity to learn, grow, and have fun playing the game we love against a very talented opponent,” Maemone said. “Our coaches emphasized how crucial it was going to be for us to keep the ball and not give it away cheaply, as well as the importance of attacking and defending together as one cohesive unit.”

“I think our strategy was just to play our hardest and rely on the hard work we have put into this spring so far, which is more of a physical fitness basis,” senior goalie Brielle Preece said.

On what the team is going to work on in training this spring: “For us for the last month, it’s been a lot of running, a lot of physical fitness. We really just started with the ball last week. We’re just getting started and we thought ‘Hey, why not start with a world-class opponent?’ to give us a standard and some ideas about what we need to shoot for as we head into spring,” Ward said.

“I honestly believe that our team is extremely talented, and we are very young as well, which is so exciting,” Maemone said. “I think our team will continue to grow our overall chemistry and partnerships on the field. We have a lot of younger girls who are going to be stepping up into some big roles this year, so the quicker we can all get on the same page, the more successful we will be.”

On the excitements heading into the rest of spring and summer training: “I am so excited to continue to transform and grow alongside these girls into team 26,” Maemone said. “This game really showed us what we are capable of, and that is something to smile about. I am looking forward to seeing girls rise up and impact the team and the program, and as we continue the spring season, I believe we are going to head into summer with a desire to make next season the best Pepperdine Soccer has ever had.”