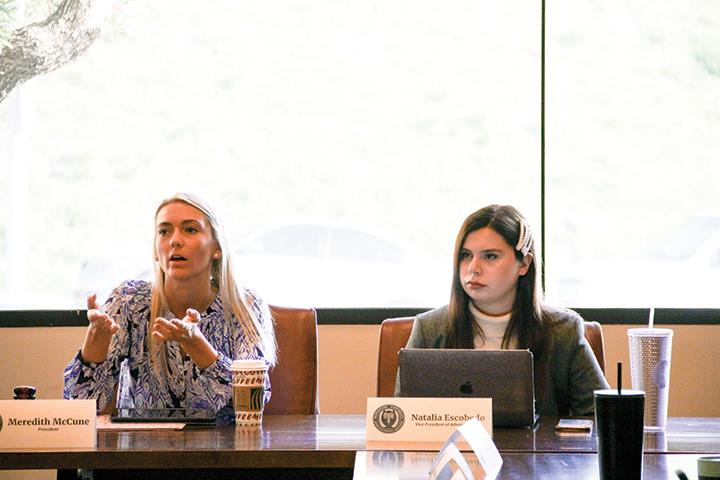 Pepperdine’s Student Government Association (SGA) discussed the launch of its new website Wednesday, Feb. 5, as part of an effort to address criticisms of their transparency during its fall 2019 impeachment proceedings.

“I think that a lot of students, especially in my class, have been talking about how they don’t like how we’re not transparent,” Junior Class President Karli Mueller said in the meeting. “They’re like, ‘Well, you guys have this money — what are you using it for?’ Especially after everything that happened in the impeachment, they’re just kind of upset that they don’t know what’s happening.”

The weekly Senate meeting in the boardroom on the first floor of the Thornton Administrative Center featured one proposed resolution and several other open forum topics, but talk about transparency dominated the hour-long meeting.

SGA discussed several ways to combat its alleged reputation, including their upcoming website.

“I’ve been working on an SGA website that is near completion where resolutions, meeting minutes, etc. will all be available to the student body in one cohesive spot,” Vice President of Administration Natalia Escobedo said during the Wednesday meeting. “It’s all pretty set to go, so that can be expected in the next few weeks.”

Senior Class Senator Daniel Iturri suggested that the Executive Board send summaries of SGA’s accomplishments and spending to the students at the end of each semester. Freshman Class Senator Dahn Hugh supported the idea, saying that it would show the students how SGA affects their lives.

“We don’t want to be a secret cult that nobody knows what we do; we just meet every Wednesday morning in an office room,” Hugh said. “It would be a good idea to let people know what we’re doing [and] how we’re doing it, especially if they’re the ones funding us.”

Since SGA spends money on more than just events, McCune mentioned that class senates may send newsletters to communicate with their peers about fund allocations, a method SGA used during her freshman year.

“Typically, each class senate is supposed to send a monthly newsletter updating your class on what your senate has been doing,” McCune said. “You’re not required to, but that is typically expected of your senate.”

Freshman Class Senator Jacob Zanca suggested that SGA use its social media to keep students informed about the resolutions the Senate considers.

“As far as keeping people informed about past resolutions goes, that’s something where we can really leverage our social media presence,” Zanca said. “Something as simple as a screenshot of the text of the resolution. That kind of thing is just a really easy way that students can have a direct line to what SGA is doing tangibly.”

Interim SGA Adviser Doug Hurley said SGA is transparent, but it takes effort from the students to find out what SGA does.

“You can make the effort to go to a town hall,” Hurley said. “You can come, you can be part, you can see. I’d love the idea of a website — I do think it is incumbent upon SGA to make sure our great spending on awesome things is known.”

Hurley also addressed the recent SGA impeachment as a part of the students’ transparency concerns.

Besides discussing transparency, the Senate passed Resolution #3-S20, which provided funding for abroad sophomores to receive class T-shirts, at the Wednesday meeting.

The Sophomore Class Senate requested $500 from the General Fund to purchase 20 tees for each abroad program, although the total cost of the tees would be $1,500.

Several members voiced concerns about the low number of tees each abroad program would receive, but Executive Vice President Jessie Arnold proposed that abroad students should fill out a Google Form if they want a tee and SGA would print however many were needed.

“I think that this is a fine thing to fund right now,” McCune said. “And if you do end up needing more funding … we definitely have room in our budget to fund more if you want to end up send more shirts to a program.”

With McCune’s endorsement, the week’s only resolution passed.

During the meeting’s open forum, Arnold brought up a conversation she had with a professor who had asked why Pepperdine no longer stocks newsstands with print editions of The New York Times.

“I asked the E-Board, because I wasn’t sure what happened, and there was a resolution passed that stopped us getting The New York Times in paper for sustainability reasons,” Arnold said.

General Judicial Council Chair Ikechukwu Egwuonwu responded that Pepperdine students still get an online subscription to the Times for free.

“It might be a good idea for us to make that a bit more clear to people,” Zanca said. “I’m sure this was public information, but I had no idea, and nobody I know has ever been like ‘Hey! I’m reading The New York Times on my Pepperdine account.’”

“We’ve [provided print editions] in years past,” Hurley said. “For example, outside of the HAWC, there’s one of those metal New York Times things, and nobody picks them up, guys. Your generation does not pick up a newspaper.”