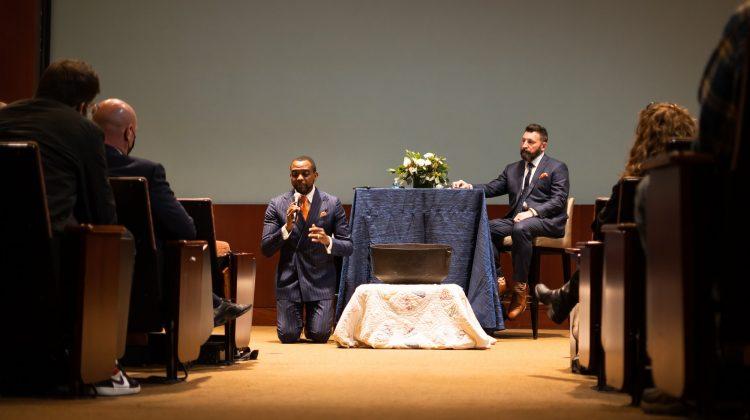 Will Ford III kneels beside a family heirloom at the first President’s Speaker Series event of 2022. Ford and Matt Lockett became friends after they discovered Lockett’s family owned Ford’s as slaves. Photo by Lucian Himes

The first event of 2022 for the President’s Speaker Series took place Feb. 16, in Elkins Auditorium. Guest speakers Will Ford III and Matt Lockett shared how God brought them together for a specific reason, and highlighted the power of prayer.

380 people registered to attend, both in-person and virtually, wrote Danny DeWalt, Vice President and Chief of Staff, in a Feb. 17 email to the Graphic.

Two dreams brought Ford and Lockett together, they said during the event, highlighting the intersection of their families’ pasts and the ways God brought them together 16 years ago. Soon after meeting, the men discovered Lockett’s family owned Ford’s as slaves, but they said they used their friendship to write a new story of their families’ connection.

“The first thing that Will and I ever did together — and I’m so thankful for this — we knelt down at the altar and we prayed together,” Lockett said. “We prayed for revival in this nation. We prayed for the nation and we prayed prayers of repentance for the sins of the nation’s past. We prayed for prayers releasing forgiveness for the next generation to move forward in freedom. And that is how we started our relationship.”

President Jim Gash developed the President’s Speaker Series in summer 2020 to bring topics relating to social justice issues to light, Gash wrote in a Feb. 15 email to the Graphic. The Presidential Action Advisory Team assisted Gash in creating a series of events for community discussion on topics relevant to the time of “national turmoil.”

“My goal is to cast a compelling vision for those committed to healing the world through the power of the Gospel and the power of story,” Gash wrote.

Gash wrote he learned of Lockett and Ford through a video he saw in summer 2021, and immediately knew they had a story that needed to be shared at Pepperdine.

Since the series originated in 2020, there have been three prior events as part of the President’s Speaker Series, with this being the fourth.

Gash wrote he hopes each part of the series will encourage students and faculty to seek truth through meaningful conversation and willingness to understand the ideas of others.

“I suppose my highest intention is that those of you who work tirelessly toward unifying individuals, groups and communities will be inspired and leave with renewed hope that if we exemplify the courage to remain authentic, engaged and faithful through challenges, we can, together, create and sustain a more peaceful, just and welcoming world,” Gash wrote.

Ford is director of the marketplace leadership major at Christ for the Nations Institute in Dallas, Texas, and founder of Hilkiah Ministries, and Lockett is executive director of the Justice House of Prayer D.C. in Washington, D.C. The two are co-authors of, “The Dream King: How the Dream of Martin Luther King, Jr. Is Being Fulfilled to Heal Racism in America” — a book about how God brought them together.

The night kicked off with Ford detailing his family’s history of being enslaved. Standing beside a kettle, Ford recalled stories his family told about using that same kettle to muffle the sounds of their prayers — an act he said the masters forbid.

“The irony of the peculiar institution that slavery was, was that they wanted slaves to be Christians, but they didn’t want them to pray,” Ford said. “They felt like prayer would foster hope, and if they got hopeful, they thought, ‘Maybe these folks will then try to run away.’”

A member of the Lockett family, who owned the Ford family as slaves, passed the kettle down through generations until it was ultimately given back to the Fords, to Will Ford, Sr.

Ford said the kettle is a reminder to him that prayer can bring people together.

“Many of the white abolitionists and revivalists had their houses burned, they were shot, they were killed, and that’s because they chose to suffer with the people of God rather than compromise,” Ford said. “They put their privilege at risk to see other people flourish. They were fighting for their family. They knew they were connected as family members because of the blood of Jesus.”

Ford later recounted what brought him to meet Lockett. Ford said he dreamed about Martin Luther King, Jr., reminding him of the “white baggage” he held onto.

Ford said he felt inclined to look back on racist encounters from his past so he could begin to let go of them and forgive.

“I know what it is like at 13 years old to come out of a convenience store with three friends and a car load full of white guys pulled up to us and started shouting the “N” word at us,” Ford said. “I know what it is like at 19 years old coming out of a grocery store and a plain-clothes cop falsely accuses me of shoplifting when they could not find anything on me and he said things to try to provoke me for a fight so he would have a reason to take me in. I know what it’s like in my 30s to get my first nice house in the suburbs and have the same police officer every week for the first three months pull me over just for driving while Black.”

This dream, Ford said, led him to attend a prayer meeting at the Lincoln Memorial on MLK day in 2005, where he met Lockett.

Lockett spoke next on how he found himself at the same service as Ford. Following the passing of his father exactly one year prior, Lockett said he reflected on where he and his family came from.

“You have an opportunity as a believer to make sense of the storyline, but then make decisions in your generation that, ‘Am I going to repeat the mistakes of the past or am I going to break that cycle and move positive things forward?’” Lockett said.

The Lord spoke to Lockett in a dream, he said, about how the culture of his life was about to shift through prayer. In his dream, God gave Lockett the name of a minister — Lou Engle — who he quickly connected with — and who invited him to the prayer meeting on the Lincoln Memorial.

That night, Ford told the crowd at the MLK event the same story he told the Pepperdine community about his kettle. When Lockett heard his family name in the speech, he said he felt God fulfilled his prayers.

The evening closed out with a prayer from Lockett and Ford, and left audience members, such as first-year Hannah Loewen, emotional.

Loewen said she was brought to tears after hearing how prayer had so much power in the lives of the two men.

“It is amazing that God can work that way — that He can work through anyone’s lives and take any situation and use it for the glory of His Kingdom,” Loewen said. “Seeing how influential the reconciliation between those two families was amazing, and seeing how God can take terrible circumstances and use it for so much good.”

Hearing the way Lockett and Ford used the power of prayer to cultivate a meaningful connection also reminded her not to leave prayer behind in her own life, Loewen said.

“When I got here last semester, I had this insane urge just to pray for our campus,” Loewen said. “It kind of dwindled away as I got really busy with classes and got involved with things, but that definitely sparked that like thing inside me like, ‘Wow, I want to continue to pray for people just as a whole and also individuals here on campus.’”

The next event in the series will take place March 10, with Byron Johnson speaking about how faith impacts the human experience of working toward a common good.