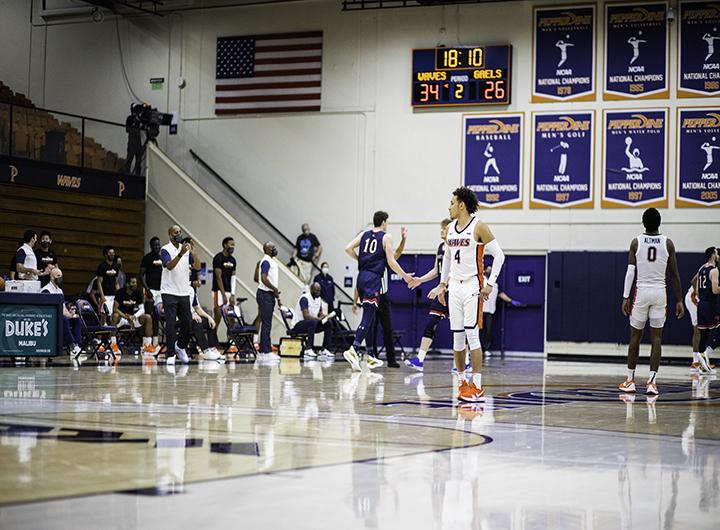 Senior guard Colbey Ross stands at half court early in the second half against St. Mary’s on Feb. 13 in Firestone Fieldhouse. Ross scored 10 points and had 10 assists with 5 rebounds and 1 steal.

A comfortable 13-point lead with 5:30 left in the game against a team that didn’t play for three weeks and shot under 30% from the field. These were the circumstances for Pepperdine Men’s Basketball late in the second half versus Saint Mary’s.

The Gaels decided to make it a game, rattling off a 12-0 run in just over four minutes of game time. The Waves used free throw shooting, man-to-man defense and surprise contributions from bench players to hang on to win 60-58 in a key WCC matchup.

“Those last two minutes were long,” Head Coach Lorenzo Romar said. “As a team we had to make sure we got stops and a drive to the basket when we needed.”

Throughout the first half, Pepperdine was far from having a comfortable lead. They started 1-for-8 from the field with a pair of turnovers and trailed 7-3.

The first of only two subs in the game for Pepperdine was sophomore forward Jan Zidek, who converted a layup less than one minute after he checked in. The Gaels maintained a slight lead in the early portion of the first half until redshirt junior Jade’ Smith – Pepperdine’s other contributor off the bench – hit back-to-back shots to give the Waves a 12-11 lead.

The Gaels, who hadn’t played since Jan. 23 due to a COVID-19 related pause, looked out of sorts by their standards. They were 8-for-26 on field goals in the first half and 2-for-11 from 3-point range.

The strength of the St. Mary’s offense is its guard play, as graduate senior Tommy Kuhse and junior Logan Johnson lead the team with 14 and 11 points per game, respectively. While Johnson had seven in the first half, Kuhse was held to just two points largely due to excellent defense from sophomore guard Sedrick Altman.

Smith said his high effort in practice translated to the game.

“My shot felt good tonight,” Smith said. “I’ve been working really hard in practice, getting reps to feel better about my game. It worked for me tonight.”

Zidek, who had his first career double-double with 11 points and 11 assists, said he’s enjoying his more significant role on the team.

“It’s been a little up and down but I am contributing more,” Zidek said. “I struggled a bit mid-season but I’m back now. And I’m more than just a shooter, last season I was a spot-up, maybe one-dribble pull-up guy. This year I’m more of an all-around player, helping on defense and getting boards.”

Pepperdine coasted through much of the second half and never had less than a three-point lead. One of the surprises was senior guard Colbey Ross, who didn’t score until there was four minutes left in the first half and finished with 10 points. He consistently deferred to his teammates, including dribble drives on back-to-back possessions where he drew weak-side help and dished the ball to Kessler Edwards, followed by Altman, which both led to rim-rattling dunks.

Ross had five assists in each half, the fourth time this season that Ross finished with double-digit assists.

Romar said he is pleased with his point guard and captain’s performance all season.

“In his career, he’s scored a lot of points,” Romar said. “He’s set a lot of records. But right now he’s running this team and playing some of the best basketball of his career.”

When a pair of Ross free throws gave Pepperdine a 57-44 lead with 5:30 left, the Gaels started to fight back. A three from the wing from Saint Mary’s and a quick miss by Pepperdine led to a momentum-shifting and-one finish from Kuhse to cut the lead to seven in just two minutes.

After another Pepperdine miss, Johnson went 1-for-2 at the line before getting the ball back and converting another and-one layup. The Gaels took a charge on Edwards and fed junior center Matthias Tass, who dominated the Pepperdine frontcourt with 17 points, for a layup to make it a one-point game, 57-56.

After another turnover from Pepperdine, Saint Mary’s had a chance to take a lead with a lofted pass inside to Tass that was broken up by Ross before going out of bounds. After a video review, the officials saw it was off of Tass and the call was upheld, giving Pepperdine the ball.

After a lightning-fast drive, Ross got to the free-throw line with 20 seconds left. He missed the first and made the second, bringing the score to 58-56. The Gaels looked to Kuhse, who tied the game with a right-handed layup with seven seconds left.

Without calling a timeout, Ross got the inbound and stormed down the length of the court before being fouled with two seconds left and going to the charity stripe once again. He converted both free throws and the last-second runner by Kuhse from just inside half court missed high.

Smith said in the high-pressure situation, his team knew what they had to do to win.

“In the timeouts, we knew it came down to stops,” Smith said. “We had some calls go against us but when we had the ball we wanted to have motion, keep the ball moving and waste time. We could’ve done that better but Colbey made a great play at the end of the game.”

Pepperdine is tied for second with BYU in the West Coast Conference standings with a 6-3 conference record and 10-8 record overall. They’ll travel to Santa Clara on Saturday to play the 9-4 Broncos at 3:00 pm PST.

“We need to come back from a high tonight of beating a great St. Mary’s team,” Romar said. “I think we’ve arrived, and we know that we’re still in a huge fight for this conference. That’s what matters to me, regardless of Santa Clara, we have to be right.”