Opinion: Selflessness and Empathy Must Overpower Desensitization to Bad News 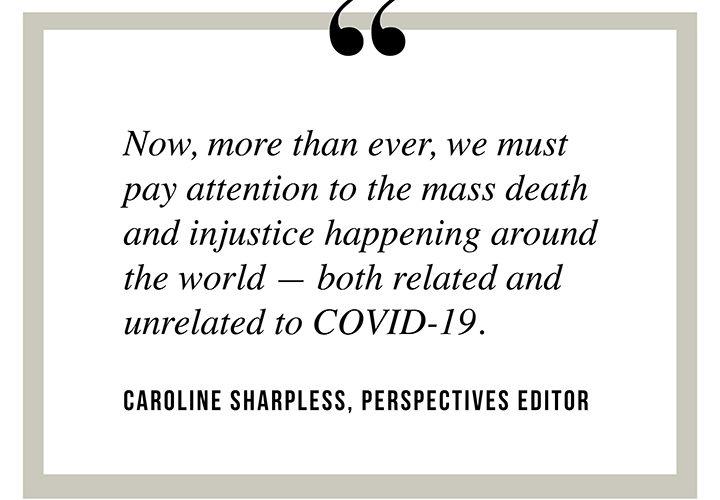 Americans will remember 2020 as an election year like no other. Against historical precedent, the Republican-led senate spitefully confirmed a Supreme Court Justice days before the election, a candidate refused to say he’d facilitate a peaceful transfer of power should he lose and U.S. agencies found evidence of multiple countries attempting to interfere with election results. But the issue at the forefront should be the COVID-19 pandemic — the highly debated, majorly contested, disgustingly politicized catastrophe that has killed over 1.3 million people worldwide thus far.

At least 247,142 Americans lost their lives because of the pandemic and the Trump administration’s poor leadership. This number is higher than the total number of Americans who died during the Revolutionary War, Indian Wars, War of 1812, Mexican War, Spanish–American War, Korean War, Vietnam War, Desert Shield/Desert Storm, Iraq War and Afghanistan War combined — both in and out of combat — according to data from the U.S. Department of Veterans Affairs and the Watson Institute at Brown University. Yet, many Americans, including many elected officials, refuse to listen to the experts and science to end the problem.

Now, more than ever, we must pay attention to the mass death and injustice happening around the world — both related and unrelated to COVID-19. The U.S. no longer has the same sense of patriotism and camaraderie we once displayed in past times of national peril. The only solution is to prevent ourselves from experiencing news fatigue, becoming desensitized to violence and losing touch of our humanity.

Have We Become Desensitized Since Past National Crises?

The events of Sept. 11, 2001, killed just under 3,000 Americans, and people still come together decades later to remember the lives lost — as they should. With the pandemic that killed 75 times as many Americans, however, civilians and politicians are more divided than ever.

Despite decades of arguments on the effects of explicit or gory movies and violent video games, they are likely not the primary cause of America’s newfound desensitization. Instead, smartphones and social media carry the burden.

Thanks to exponentially advancing technology, Americans have immediate access to worldwide news. From push notifications to news apps to social media posts, headlines are inescapable. This makes people more informed on global issues but also prompts a much larger web of problems for everyone to worry about — possibly larger than any other generation in history.

On the one hand, we cannot let grief consume us. It’s unhealthy to feel the pain of thousands. But at the same time, we need to spend more than a few moments of thoughts and prayers on an issue. We need to address these problems rather than letting them simmer for years as we have with the opioid crisis, gun violence and suicide.

Why Does Action Only Happen When There is a Foreign Enemy?

It is convenient to get angry about an issue when there is a clear enemy but not when the problem lies with something we love. Following Sept. 11, there was swift action; the airline industry completely changed, the Bush Administration passed the invasive Patriot Act and the U.S. entered several new wars. Islamic terrorism was to blame, and most Americans were on board.

When American policies and values like the Second Amendment, Christianity or police officers perpetrate the violence, action is not as easy and truth is clouded.

Take the issue of gun control. The U.S. had more mass shootings than days in 2019, yet, politicians presented no plans to tighten the country’s lax gun control policies. In contrast, just one month after New Zealand’s first-ever mass shooting, parliament passed gun-control reform almost unanimously. In 1996, Australia responded the same way after its first mass shooting and hasn’t had any mass shootings since.

Some states in America responded to school shootings by allowing teachers to bring guns to class, pushing even more guns into civilians’ hands.

Many oppose gun restrictions, equating the right to bear arms with freedom and patriotism despite the many un-American acts U.S. gun owners inflict on others.

Meanwhile, the U.S.’ uncommonly relaxed rules do not include a federal mandate for background checks before purchasing. Across 36 states, there are no legal requirements for gun registration permits or licenses in order to purchase firearms, and in some states, people can buy guns at 18 — four years before they can consume alcohol.

Countries like Japan — which has never had a school shooting — require buyers to complete a firearm class, take a written exam and provide a doctor’s note proving mental fitness, among other safety precautions.

Americans who truly support the safety and sanctity of others should have no qualms supporting government action to ensure gun owners are responsible enough for ownership. Similarly, Americans should realize they have no real need for military-grade weapons with the ability to kill multiple people in an instant and support their ban.

This month, reports surged of China operating nearly 400 internment camps, detaining and abusing Muslims. Similarly, in the U.S., Immigration and Customs Enforcement cannot find the parents of 545 children after forcing them to separate from each other, according to The New York Times. Around the same time, a whistleblower accused ICE detention centers of performing mass hysterectomies on immigrant detainees.

Many journalists and spectators alike are comparing China and ICE’s actions to the Holocaust. Unfortunately, these stories get lost in the chaos.

People then accuse the media of distracting from these conflicts by spending too much time talking about the president or the pandemic.

The news media, however, is obligated to report on the actions of the president — especially when they directly challenge the behavior of all past presidents. Articles on foreign issues such as the ones in Nigeria or Yemen exist, but on-air stories are reserved for breaking news; Trump’s behavior is always breaking.

If Trump did not want the press to stay focused on him, he would stop demanding attention by behaving in such an unpresidential manner. Instead, he ignores all precedents of how to lead the nation and goes on Fox News, Twitter and rally stages regularly to spew his opinions.

This is a testament to the importance of electing stable politicians. Journalists spent much of the year — really, the last four years — covering Trump’s erratic behavior, from his outrageous tweets, his impeachable actions and his never-ending lies.

The time spent documenting the completely preventable White House COVID-19 outbreak, for example, could have been spent educating Americans on the Nagorno–Karabakh conflict, which has displaced approximately 70,000–75,000 people in a matter of weeks.

Other times, people read hard-hitting articles then write off the factual allegations as “fake news” for no reason other than personally disagreeing with the claims. This is something the president has done with many valid, reputable reports.

Creating a distrust between the press and people is an age-old tactic of dictators — including Hitler. This constant denial of truth is one of the many factors that leave around 68% of Americans with “news fatigue,” or exhaustion from consuming news, according to Pew Research Center.

Many people look back on the Holocaust and question how the world allowed Germany to commit such heinous acts. It is possible 1930s Germany looked how the world looks now with too many other issues to watch, too much confusion regarding truth and too little people with strength left to care.

Mass Death is Already Normalized — What Can Be Done Now?

Statistics and numbers are the most effective way to show the severity of an issue, but the shock of new COVID-19 cases or people dead in ICE camps stings less every day. Perhaps this is because a life cannot be quantified. If journalists spent time detailing the lives of every American lost to COVID-19 — and if Americans actually read it — maybe more people would be inclined to wear masks and take other measures to prevent the spread of the virus.

But due to the sheer volume of problems and deaths in America, this is impossible. People should naturally feel enough empathy and concern for others to act in the interest of the greater good without a sob story.

Even though it’s exhausting to care about all the death and violence in the world, we must.

Start online fundraisers to raise money for the 24 million people seeking humanitarian aid in Yemen. Share suicide prevention and mental health resources on social media to prevent a follower from being the one death predicted to occur from suicide every 20 seconds. Challenge the pharmaceutical industries responsible for the 72,000 Americans that drugs killed last year. Vote for stable politicians who don’t make approximately 50 false or misleading statements per day.

Make sacrifices: Wear a mask even if it’s inconvenient and support gun control even if it means it will take longer to buy a firearm.

It is not selfish to ignore depressing headlines; in fact, doing so is completely understandable. It is, however, unacceptable to stand by as thousands of innocent people die preventable deaths or suffer preventable harm.

Dr. Anthony Fauci said it best: “Now is the time, if ever there was one, for us to care selflessly about one another.” 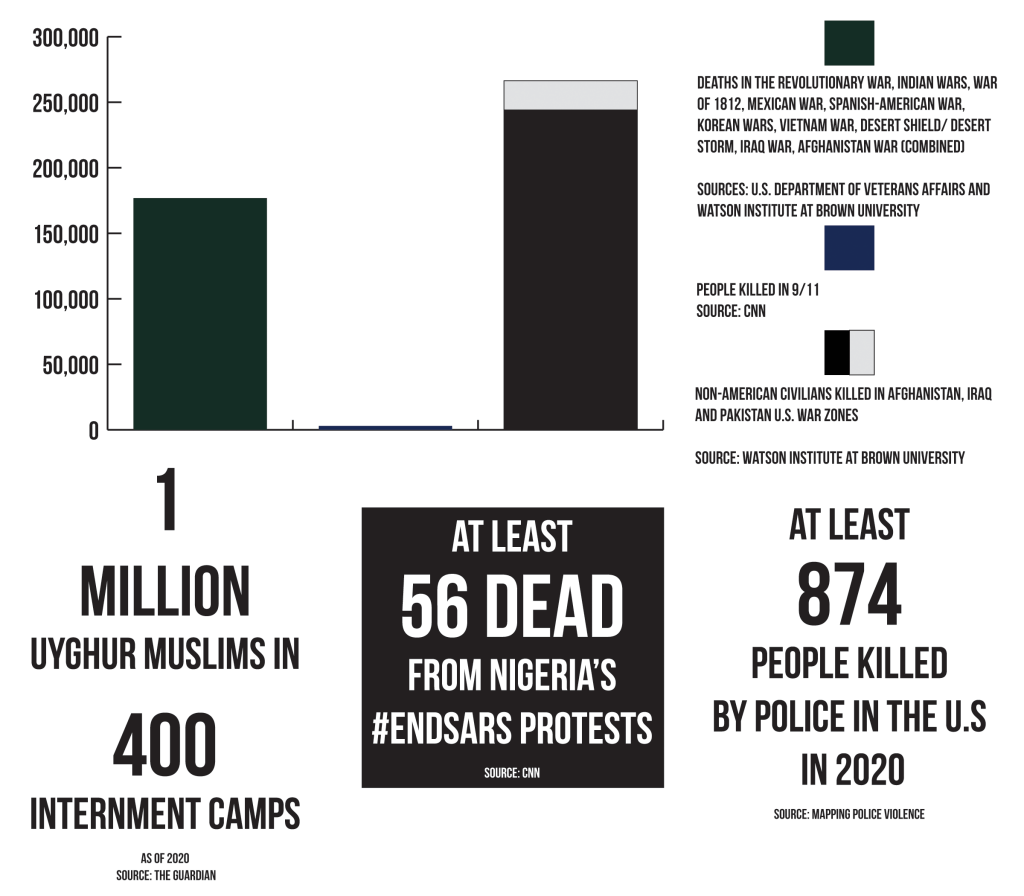 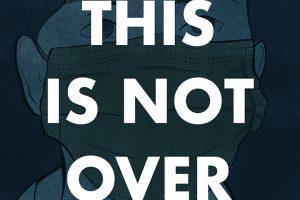