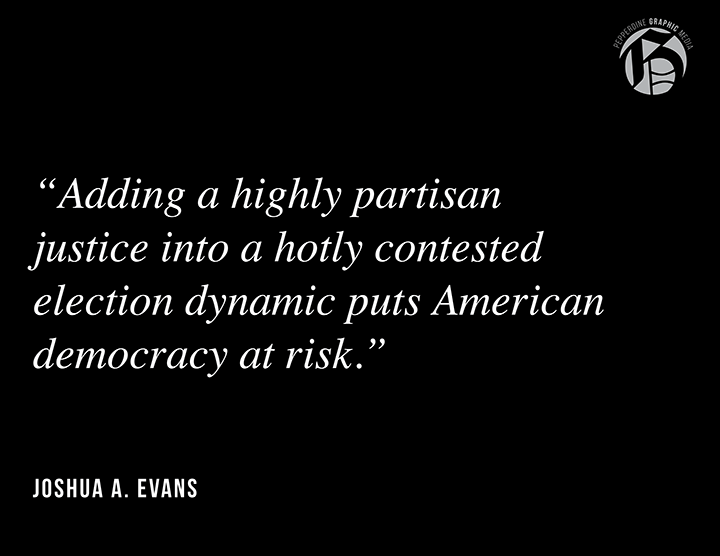 With less than a month until the presidential election, Republicans are rushing to confirm a new Supreme Court justice. Judge Amy Coney Barrett is a highly partisan judge who President Donald Trump nominated to entrench conservative values and his personal political agenda into the Supreme Court; this confirmation would create an ultraconservative politically partisan Supreme Court that fails to represent the mainstream values of the United States.

Justice Ruth Bader Ginsburg died 46 days before the upcoming presidential election. Yet, Republicans are pushing to have Barrett confirmed before Election Day. Scalia died nine months before the election. Considering the Republican objection to Garland was based on election proximity, this rush to confirm a new justice is grossly partisan and unfair.

In addition to the blatant hypocrisy of her hurried nomination, Barrett would drastically reshape the Supreme Court by replacing a liberal justice with an ultraconservative originalist.

The first legislation on the chopping block if Barrett is confirmed before Nov. 10, will likely be the Affordable Care Act. Barrett wrote that the 2012 ruling upholding the constitutionality of the ACA was wrongfully decided. The close decision was 5-4, with Chief Justice John Roberts and all four of the Court’s liberal associate justices voting to uphold the ACA as constitutional. If the Senate confirms Barrett, future Supreme Court decisions on this subject will likely be different. The gutting or overturning of the ACA with Barrett on the Supreme Court is likely, given her originalist views.

The Supreme Court overturning the ACA risks millions of Americans losing their healthcare coverage. Protections against preexisting conditions and anti-discrimination statutes are also threatened if the ACA is gutted. In the midst of a global pandemic, the one surefire way to make things worse is to take away people’s healthcare.

Aside from health care, reproductive rights would be in jeopardy with a more conservative Supreme Court upholding punitive state restrictions on abortion and contraception or allowing them to be banned totally. Barrett has given public speeches and signed petitions arguing against abortion, confirming she takes a strong anti-abortion stance.

LGBTQ+ rights would also be eroded if Barrett is confirmed. The Republican platform states that it wants to overturn gay marriage. Barrett is on the record defending Supreme Court dissenters in the marriage equality ruling Obergefell v. Hodges.

Disability rights would likely suffer from the new Supreme Court balance. Barrett has a history of ruling against people with disabilities. In P.F. v. Taylor, she ruled a school district should be allowed to reject transferring students with disabilities because it had not accounted for these students’ extra support needs in budgeting.

If the Supreme Court is to undergo such a radical shift to the right, the American people’s voice should be heard. Whoever wins the presidential election should have the right to appoint someone to fill the vacant seat.

Sen. Lindsey Graham told Americans, “If there’s a Republican president in 2016 and a vacancy occurs in the last year of the first term, you can say Lindsey Graham said let the next president, whoever it might be, make that nomination.”

By supporting the rushed nomination of Barrett just days before the presidential election, Graham has not kept his word. He is not willing to risk Republicans losing the opportunity to cement a conservative supermajority on the Supreme Court.

Joe Biden’s popularity is riding high. He is polling better than any presidential challenger since 1936. A Washington Post and ABC News poll shows Biden leads Trump by a 55% to 43% margin among likely voters. The popular vote in America, however, does not decide who is president. Trump still has a potential path to victory through the Electoral College and the Supreme Court.

President Trump seeks to seat a highly partisan justice as a way to increase his odds of staying in power if the election results are contested. Republicans also want to utilize Barrett’s ultra-conservative views on the Supreme Court to tip the balance in favor of conservative Republican values.

Adding a highly partisan justice into a hotly contested election dynamic puts American democracy at risk. During her confirmation hearing, Barrett refused to answer questions about how she would rule if Trump refused to leave office after the election if he lost.

The Republicans are rushing the Barrett confirmation in bad faith with the intention of undermining progressive values and the presidential election results. In order to ensure that President Trump cannot thwart the will of the American people, through the judiciary or otherwise, people have to vote in substantial enough numbers that the election results cannot be successfully contested.