No. 25 Pepperdine women’s soccer upset No. 5 BYU 1-0 in a shutout at Tari Frahm Rokus Field on Saturday afternoon. With the victory, Pepperdine moves to 8-3-3 on the season and 3-0-1 in conference play, and takes sole possession of first place in the West Coast Conference.

Junior Bri Visalli capitalized on a penalty shot in the 75th minute for the lone score of the game in what was a very strong defensive performance by both teams.

“I think it’s [the game] pretty humble but [we are] still hungry,” Visalli said about the win. “It’s definitely great momentum to go into the second half of conference play with confidence.”

In the first half, the Waves and Cougars battled in a strongly contested match. In the 30th minute, sophomore Christina Settles had a shot blocked, but Visalli nearly turned the rebound into a shot opportunity — only to see it knocked away at the last second.

A minute later, the Waves were on the attack again as senior Rylee Baisden had a give-and-go to sophomore Katy Byrne for a shot, but it was saved by the goalkeeper. Pepperdine and BYU entered the half tied 0-0.

In the second half, the Waves had multiple shots early on, but could not ultimately get past the Cougar defense. BYU countered by drawing four consecutive attack opportunities, but the Waves defense shut down the Cougars attack. In the 74th minute, Visalli drew a penalty kick and knocked it in to give the Waves a 1-0 lead, her third of the season. Pepperdine and BYU traded shots back and forth, but BYU could not rally back as Pepperdine hung on for the upset.

Head Coach Tim Ward talked about how big the matchup was against one of the top-five schools in the nation:

“I’m really proud of this team and I knew we had it in us because we’ve been playing well,” Coach Ward said. “We’re peaking at the right time and we have worked hard for this and the schedule has helped prepare [us] for tough teams like BYU.”

Ward also talked about the importance of winning the match against conference rival BYU and the team’s hopes of securing the WCC crown:

“If we want a chance to win the conference championship, we have to be strong at home,” Ward said. “We’ve also proved we can get results on the road and we just have to show up everyday, one game at a time and do the best we can.”

Up next, the Waves will travel up to Northern California for a lone matchup against Saint Mary’s on Friday, Oct. 15. 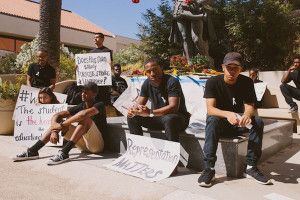