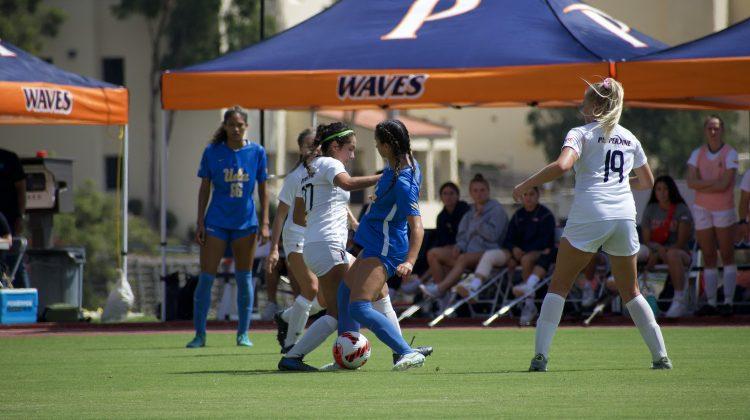 A Pepperdine and UCLA player battle for the ball during the Bruins’ 4-0 victory in Malibu on Sept. 18. The match was a physical contest throughout. Photos by Colton Rubsamen

No. 9 Women’s Soccer fell 4-0 to No. 1 UCLA on a sunny afternoon at Tari Frahm Rokus Field on Sept. 18. It was the Waves’ last match of their out-of-conference schedule, which they finished 6-1-2.

The Bruins continued their perfect start through eight games of the 2022 campaign with goals from forwards Reilyn Turner, Lexi Wright, Sunshine Fontes and MacKenzee Vance. Despite a nine-save performance from junior goalkeeper Ellie Sommers, the Waves recorded their first loss of the season.

“This is going to be such an important game for the future,” Sommers said. “They exposed us in places we didn’t even know we had weaknesses in, so I think when we watch the film, we’ll be able to learn from that.”

The Bruins poured on the pressure in the opening minutes. A first-minute UCLA free kick by midfielder Sofia Cook landed on top of the net, signaling the Bruins’ attacking intentions. A series of corners in the eighth minute forced Sommers to make two outstanding diving saves on a pair of Turner headers.

“She had a couple great saves, and she’s been working really hard,” freshman defender Taylor Bloom said of Sommers. “It’s very nice having her back there with me.”

Ward said UCLA’s 3-5-2 formation posed a tactical problem for his side. Pepperdine shifted from their traditional 4-4-2 diamond to a 3-5-2, Ward said. The change was made so the Waves could mark the Bruin’s two forwards with three center backs. Unfortunately for the Waves, the tactical switch didn’t pay off.

“We thought before the game, ‘Tactically, this is an interesting matchup, because they have some pieces we’re going to have a tough time defending,’” Ward said. “So we started in a funky shape, and very quickly we were sort of against it.”

Turner tormented the Waves defense until her substitution in the 21st minute. In the 18th minute she latched onto a cross from a Bruin’s midfielder and headed it past the onrushing Sommers. The Waves huddled in their own half to gather themselves as the Bruins celebrated with their bench.

“Our communication started off pretty good, and we were all together,” Bloom said. “Later on, it drifted a bit, and that’s where things started to go wrong. But, I think, as long as we keep talking and communicating with each other and staying intact like we usually do, we should be good.”

After the Bruins scored, the contest evened out. Pepperdine’s offense grew into the game through a series of crosses and set-pieces, mostly provided by redshirt senior defender Trinity Watson. In the 29th minute, the Waves had a threatening set piece at the top of the UCLA penalty area, but Watson’s effort rocketed into the wall.

The Waves’ most promising moments came shortly after. Senior midfielder Carlee Giammona won a free kick on the right side of the penalty area, and after a dangerous service by Watson, a shot in the scramble went a few yards over the bar. Then, in the 31st minute, Pepperdine hit the crossbar.

Defensively, the Waves worked tirelessly to keep the Bruins offense in check. In the 43rd minute, midfielder Ellie Walbruch made her way into the penalty area and tried to cut past Bloom. Bloom was wise to it, and made a smart tackle that, despite Walbruch’s appeals for a penalty kick, won the ball cleanly.

“The tracking back was great,” Sommers said. “Honestly, without the backline, the scoreline would be much worse.”

The beginning of the second half mirrored the first — the Bruins forced Sommer into three saves within the first six minutes. While some last-ditch defending kept the scoreline 1-0, the dam finally broke in the 52nd minute. After a poorly cleared cross, Wright found herself alone in the penalty area with the ball at her feet, and coolly slotted home the finish.

“The second goal came, and that’s the game,” Ward said. “It wasn’t like you try to give up at that point, but you’ve got 20 minutes to go and a hill to climb.”

UCLA made it 3-0 in the 79th minute through Fontes, who scored her sixth goal of the season. Ward said after the second and third goals went in, it was tough for his team to imagine a way back.

The Bruins tallied a fourth in the 86th minute. Sommer ran out to collect a ball outside her penalty area, but was beaten to it by Vance. Vance made a move around the few Pepperdine defenders who could track back in time and dispatched the ball into an empty net.