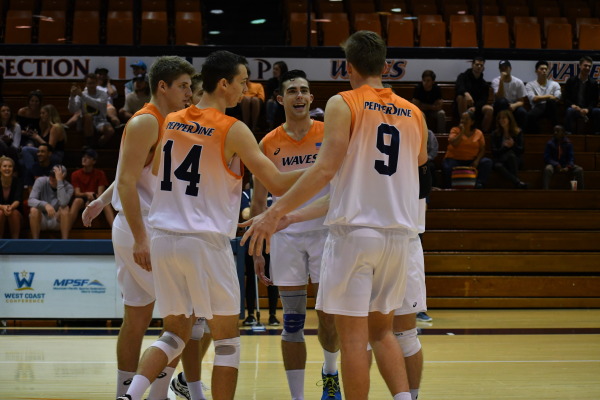 Men’s volleyball welcomes nine new players to the roster, the largest freshman recruiting class in Pepperdine history, for another season under the leadership of new Head Coach David Hunt. Pepperdine is off to a strong start as Colby Harriman and Noah Dyer lead the team against Cal Lutheran with 10 kills each, defeating them in a clean sweep of 3-0.

The impact the new players have on the team has shown early on in the season with freshman setter Robert Mullahey starting in the match against UC Irvine and freshman libero Spencer Wickens making an appearance on court as a serving specialist for every set played.

“The freshmen impact our practices every day. That’s where they have the most impact,” Hunt said. “I don’t know how many of them will play this year, but they’re great Waves and will help us down the road. We have to be mindful that it’s a difficult world for them to come into. There’s the pressure, the anxiety, the energy and the nerves. I just want to give them the tools to help cope with that on a daily basis.”

Tough competition awaits the team in the conference, but Mullahey said he is excited to welcome the challenges.

“I think we definitely have the talent to not only make it to the final seven, but make it to and win the national championship this year,” Mullahey said. “I have all the confidence in the world in our guys, our coaching staff, and the way we train so I think that if we’re able to get there we have the talent to do some damage. I’m really excited to see what the rest of the season has in store for us.”

Outside of a strong freshman class, the strong senior leadership of Colby Harriman, Alex Harthaller, Weston Barnes and Clay Carr have made the transition for the freshmen to the court easier.

“They don’t treat us like freshman,” Wickens said. “They treat us like we’re another member of the team and that’s what a real leader should do. They’re good teammates.”

“It hasn’t been too different under the new coach,” Harthaller, who played under Dunphy for three years, said. “David has been assistant coach for so long. He ran a lot of things and was super close to the players. We trust him. It’s not too huge of a change because Marv is not totally gone, Marv is still in his office, he’s still around. It’s a smooth transition.”

Even under the new head coach, Dunphy’s influence over the program remains strong.

“There’s a lot of pride that goes into the position,” Hunt said. “I’m glad that Marv’s around every day to lean on and talk to for some guidance so I’m not going solo.” 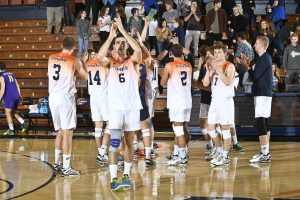