“We lost to UCSB at their place last year pretty badly,” Oetzbach said. “We as a team wanted to get the win this time, and personally, I just wanted to contribute in doubles as well as singles. I think we were the better team overall.” 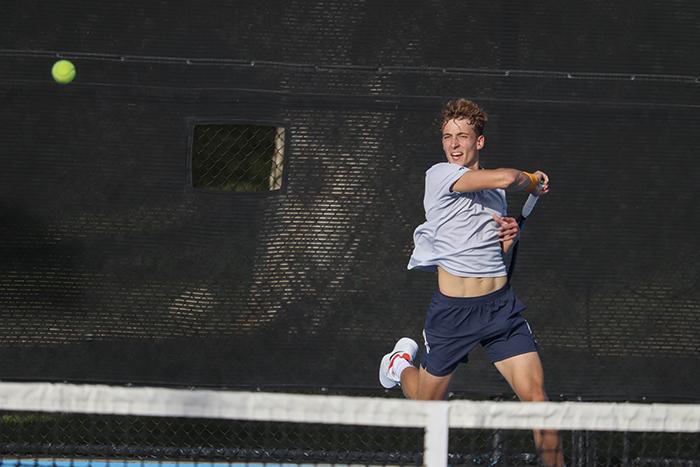 Pepperdine lost the doubles points to the Gauchos in the beginning but managed to win the first singles match when sophomore Tim Zeitvogel won 6–1, 6–2 over sophomore rival Alejandro Vedri.

“We just wanted to play with a lot of energy [by] motivating the other two courts and our teammates to play better,” Oetzbach said. “I think that my teammates and doubles partner did a really good job at being loud and vocal and energized.”

Pepperdine’s goal going into the match was for the newer players to gain more experience before the NCAA Tournament as well as to make a comeback from their 0–7 loss against UCSB in the 2018–2019 season.

“We were looking for some of our younger guys to get more experience and to try to play a complete match where we competed well at all nine spots,” Head Coach Adam Schaechterle said. “I think we improved and came closer to that goal, but we still have a lot of work to do as we continue the season.”

The Waves opened the 2020 dual season by winning the matches against both West Coast Conference opponents Santa Clara University 5–0 and University of San Francisco 4–2. Pepperdine also came out victorious against Sacramento State 7–0 and UCSB 4–3, all matches at home.

“As a team, we’re looking to get in top 25 teams in the nation,” sophomore Corrado Summaria said. “We are also looking to win the conference and enter into the NCAA Final.”

“We want to improve and see how good we can be in May when the NCAA Tournament comes around,” Schaechterle said. “I think we’ve already had some positive moments. … We’re seeing some encouraging signs, but far more important for us is that we continue to focus on each individual guy developing and being as efficient as they can in their improvement.”

Seven of the nine players on the team are underclassmen, three of them freshmen. While a young team, Schaechterle relies on the freshmen to win conference matches and to continue their excellence, Summaria said.

“The freshmen who were just recruited are proving that they care and understand the values of the program and of the team,” Summaria said. “They’re doing a really good job at being respectful and putting effort and bringing positivity, which makes everyone better.”

Oetzbach said their greatest competition will be the match against University of San Diego on Apr. 19 in San Diego.

“The match against San Diego is still some time away, but we are not going to change our system dramatically,” Oetzbach said. “We are going to try to come out with good energy and give it our all and embrace the battle.”

Overall, the team plans to take it match by match to continue their winning streak and eventually win the West Coast Conference Championship, Oetzbach said.

The Waves encourage everyone to support them as they take on the University of Arizona at home Mar. 12.