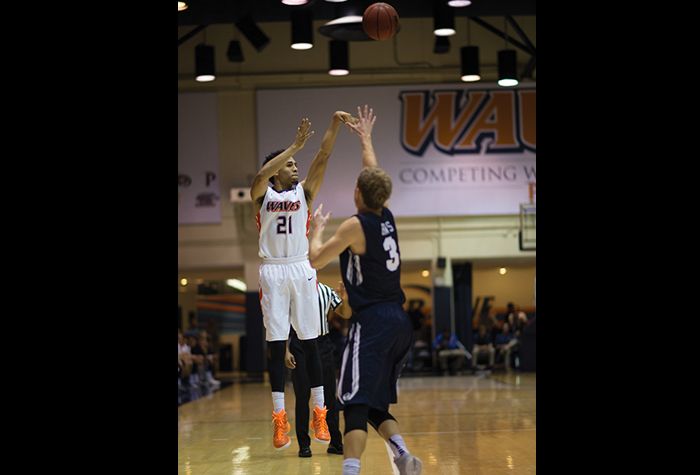 After recording their 16th overall and 9th win in conference play of the 2014-15 season, the Pepperdine men’s basketball team clinched their first winning season since 2005 and was assured of a buy-in to the quarterfinals of the WCC Tournament in Las Vegas.

The Waves, who were chosen to finish in a tie for seventh place in the WCC preseason coaches’ poll, have greatly surpassed expectations. With the No. 4 seed at the WCC Tournament, the Waves look to continue to make even more noise to what has already been a successful season. Led by one of the best players in the West Coast, junior forward Stacy Davis, the Waves have proven themselves to be big contenders and dark horses to win the WCC Championship.

Against the top three teams of the WCC, the Waves recorded 3-3, which includes a two-game sweep against BYU and a season split with Saint Mary’s, with each team winning at the other’s home court. Although Pepperdine dropped both games to No. 3 Gonzaga, the Waves made it a tough challenge for Gonzaga in both matches, only falling to Gonzaga by two in the final seconds of the January match at Firestone Fieldhouse and by eight at Gonzaga.

Looking at the team’s statistics for this season, Pepperdine has done the most damage on the defensive side in their games. Davis, who leads the team in scoring with 15.3 PPG, is seventh in the WCC in scoring, but the Waves have had many players step up in scoring this season.

Junior forward Jett Raines has slowly established himself as a consistent double-double threat, with his average of 11.3 PPG and 5.3 rebounds. Off the bench, sophomore guard Lamond Murray Jr. has recorded double-figures in seven of the past eight games while shooting 54.4 percent from the field. Freshman guard Shawn Olden, who is third on the team in scoring, averages 9.7 PPG and has had some of his best performances on the biggest stages, including a career-high 17 points against Iowa this season.

However, Pepperdine will have to play in the tournament without two key players, who are out for the rest of the season. Sophomore guard Amadi Udenyi, who leads the team in assists (4.4 APG), ruptured an Achilles tendon late in the game against Portland, and freshman forward A.J. John, who made five starts for the team, fell ill during the team’s second trip to Northern California, and he was diagnosed with viral meningitis. John has been recovering well following stays in the hospital, but he will not play again this season.

In regards to the Waves’ defense, Pepperdine ranks first in the WCC (third in the nation) in three-point defense (30 percent), third in rebounding defense (32.9 RPG), fourth in scoring defense (62.2 PPG), third in blocked shots (4.0 BPG) and fourth in steals (6.0 SPG). Currently giving up 62.2 points per game overall, this team is on pace to reach the program’s best mark since 1961-62.

With the current standings, No. 4 Pepperdine is projected to face No. 5 Portland in the quarterfinals on Saturday, March 7 in search of a bid to the 2015 NCAA Tournament. Both teams split the season series with one win a piece.