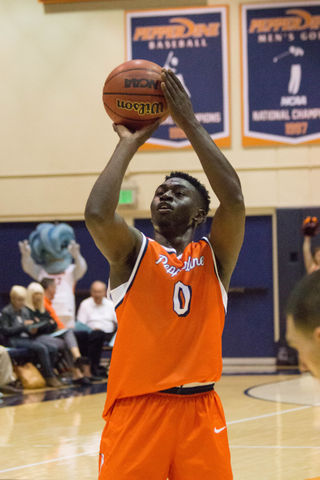 After starting the season with a 4-1 record — including two wins over NCAA Tournament teams from a year ago, Weber State and Little Rock — Pepperdine has slid ungracefully to a 4-8 record due to an unfortunate slew of injuries and a lack of defense. Thursday’s one-point loss to Montana put Marty Wilson’s Waves in unfamiliar territory: A seven-game losing streak (the worst in program history since the 2010-2011 season).

Pepperdine’s last major losing streak under Marty Wilson’s watch occurred in the 2012-2013 season, in which the Waves dropped five straight in conference play, according to sports-reference.com. During Marty Wilson’s second year at the helm, the Waves whiffed the last five games of the season to finish seventh in the WCC. (Believe it or not, the losing streak could’ve been worse without a 6-0 run in the last three minutes against Loyola Marymount that gave Pepperdine an ugly 52-20 home win.)

However, this seven-game losing streak is more perplexing than the aforementioned five-game skid of 2013. For starters, the starting lineup of the 2012-2013 team was very young: According to sports-reference.com, the Waves roster had an average of 2.4 seasons of experience under its belt. With that said, Pepperdine only had two seniors on its 2012-2013 squad. By comparison, the current Pepperdine roster has a whopping five seniors and one graduate senior, Chris Reyes, who is one of WCC.com columnist John Crumpacker’s under-the-radar players to watch, according to his Dec. 12 article, “What We Learned.”

This is where the injuries come in. Despite the fact that Pepperdine returned several experienced players from last season, two of the Waves’ key pieces are currently injured. Sophomore forward Kameron Edwards hasn’t logged a minute of game play thanks to a broken jaw suffered in practice back in November. To add insult to injury, Pepperdine lost senior guard Amadi Udenyi to a season-ending Achilles tear in a loss to Portland State on Nov. 27. Udenyi is the Waves’ spark plug on the offense and the defensive end. He is Pepperdine’s best perimeter defender; despite his limited action, he is still third on the team in steals with 10, according to sports-reference.com. And on offense, Udenyi averaged 5.3 assists per game in the six games he played in this season.

Arguably, the absences of Edwards and Udenyi have impacted the Waves more on the defensive end than on the offensive end. Pepperdine has usually been a defensive-minded team in the Marty Wilson era. In the Graphic’s Nov. 9 article “Men’s Basketball Coach Marty Wilson Talks About the Upcoming Season,” Wilson said Pepperdine “will defend. That’s something we hang our hats on.” Last season, the Waves were 38th in the nation in 3-point defense, according to sports-reference.com, which helped the Waves clamp down on the WCC’s hot-shooting teams. Pepperdine is last in the West Coast Conference in points allowed per game (81), which does not bode well, considering the WCC also has two of the nation’s most efficient offenses in the nation: Saint Mary’s (8th) and Gonzaga (18th), according to kenpom.com’s metrics.

More disturbingly, the Waves have slipped on the national level. The Waves are now second-to-last in the nation in 3-point defense: Opposing teams have shot an astounding 42.4 percent from deep against the Waves this season. And it’s not like Pepperdine has played top-notch teams in this regard. Three of the Waves’ opponents are the bottom 50 percent of 3-point shooting teams in the nation: University of Louisiana-Lafayette (219th), Long Beach State (251st) and Belmont (314th), according to sports-reference.com. For the record, Pepperdine allowed these three teams to shoot 44.4 percent, 44.4 percent, and 41.9 percent, respectively.

But here’s the perplexing bit: Pepperdine is 25th nationally in 3-point shooting, according to sports-reference.com. Logically, Pepperdine should be outshooting their opponents, but only 24.9 percent of their points have come from beyond the arc, good for 341st in the nation (!!!).

So for those keeping score at home, ’16-’17 Pepperdine has an older, more experienced roster — including two all-conference players from the year before, plus stud transfer Chris Reyes nearly averaging a double-double per game — with a more experienced coach. As a unit, they’re one of the best in the nation in 3-point shooting percentage, but they don’t use the outside shot too much in their offense. Yet this is the team with the ignominious honor of Pepperdine’s worst losing streak in the Marty Wilson-era. Does this make any sense?

It does, when one considers defense.

The Waves are the equivalent of the NFL’s New Orleans Saints. They have one of the best offensive players in team history (hello, Lamond Murray Jr.), they have the pieces to torch their opponents on the offensive end (freshman sharpshooter Knox Hellums, the aforementioned Reyes and the newest member of Pepperdine’s 1,000-point club, senior guard Jeremy Major), yet, just like the Saints, they will be on the outside looking in during the postseason because they don’t play defense.

Even with a second-half defensive surge, the Waves will probably not make any postseason tournament this season; Pepperdine’s bid for a third straight year in the CBI Tournament is on thin ice. Although Edwards is expected to be back in the rotation as soon as next week, it might be too little, too late. Had the Waves been able to pull off some wins during their non conference slate, this season might have a glimmer of postseason hope like in seasons past.

But all in all, this is probably not their year.