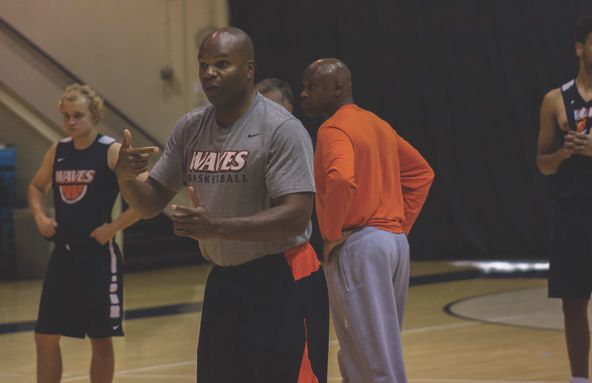 “We have a good mix of young guys that are talented, that are learning, and they’re going to grow and get better this year so I feel good about it,” Wilson said. “I’m excited about our young guys. And then we have three committed for next year. So I think our program is just going to continue to get better over the years.”

After a year of playing for the Waves, both fifth-year senior Chris Reyes and sophomore Kameron Edwards are expected to be role models for this year’s freshman and team leaders going into this upcoming season, Wilson said.

“Chris Reyes, as a veteran guy, he’s coming in and showing that he can handle a lot of different things thrown at him,” Wilson said. “And then Kameron Edwards started quite a bit for us last year as a freshman, and we’re going to move him over — he’s going to play kind of a combo forward where he plays four and a three.”

Three-year veterans seniors Jeremy Major, Amadi Udenyi and Lamond Murray Jr., are expected to start early on, Wilson said. They have more of an opportunity to score and to be aggressive because veterans from years past have graduated, opening up the floor for them to shine as leaders.

“We expect our seniors to be better. I’ll tell you what, they’ve done a great job of helping our young guys, so that’s kind of them standing out because they know, they’ve been through what we call ‘training camp.’ They know all the plays and the drills and I think the game slows down a bit for them because they’ve done it before. So it’s allowed them to help the young guys,” Wilson said. “They’re our leaders. [We’re going to be] challenging them to be leaders and to be better leaders than they have been in the past.”

Wilson said that if he had to tip-off the season tonight, his starting line-up would include Reyes, Edwards, Major, Udenyi and Murray, but that could change throughout the season.

“It will change just as we play certain teams based on who we match-up against, whether it’s their size or our lack of size, or how certain guys are playing,” Wilson said. “Some guys may not play well, then I may move rotation. One of the young guys may play extremely well and I decide to give them the opportunity to start, to play a little more.”

Eric Cooper Jr., a transfer junior from University of Nevada, Reno, will have to work hard to earn his minutes after receiving a redshirt this year, Wilson said. “I know some of the guys are disappointed because they love him. He’s a really good player, a really good shooter, smart, understands the game, but that’s part of the process. They knew that coming in he’s got to sit out.”

Kaijae-Yee Stephens, a freshman from Santa Cruz, California, and Knox Hellums, a freshman from Tomball, Texas, are both very good shooters who will be on the receiving end of a lot of Elijah Lee’s passes, Wilson said.

“I’m pleasantly surprised and pleased with Elijah Lee because the point-guard position is the hardest position,” Wilson said. “You have to think as a coach, you have to think of who the other guys are on the team. We call the point guards the ‘quarterback,’ so you have to know who can shoot it and who can’t shoot it, who can post up and who can’t post up, who likes the ball where, and what side and all those things. He’s done a great job of understanding that.”

Craig LeCesne, a 6-foot-9-inch freshman for Oxie, Sweden, is “very skilled, can handle it,” and is a “very good passer,” Wilson said. “He’s got to get stronger, but as he gets stronger he’s going to be a really good player.”

Freshman Nolan Taylor from Keller, Texas “[has] been a little banged up” because of his transition from high school to college practices, Wilson said. But he’s “big, strong, tough, physical, power forward. He’s a man. As he gets healthy and can get in shape — because he’s missed most practices — he’s going to be a force for us.”

Wear-and-tear is a part of the game, Wilson said, after so many workouts and practices — especially for the freshman who are going from training for high school games to training for Division I-level games. Workouts are longer, harder and more intense because the game is faster. But Wilson doesn’t think this is the team’s biggest concern and it’s just a matter of adjustment for the players, since “everyone in the country is dealing with it.”

But Wilson said that after looking at practices, his initial concerns are the Waves’ rebounding and the rapid development of the younger players.

With regard to rebounding, Wilson said, “Part of that is because Nolan’s been out. I think he can take up some slack on some of that.” Wilson highlighted returning sophomores Nate Gehring and Ryan Keenan, who are both 6’10” and will “continue to play and gain more experience and more confidence, so they will be able to take up the slack of that, too.”

With the development of the younger Waves, Wilson said most of the information thrown their way is new, including terminology and different offensive and defensive sets. He’s trying to focus on getting them to feel comfortable with the material and their ability to learn on the fly.

“Sometimes you feel you’re throwing too much at them, but you have to keep going because the veterans, they know it, and for us to progress, the young guys have to catch up. And they’ve done a great job,” Wilson said. “They take pride in coming in and watching film, getting up on the board and drawing it up. And if they can draw it up, then they know the plays. Overall, those are probably the main two: Rebounding and just the young guys catching up.”

This team is similar in a lot of ways to other teams Wilson said he’s coached in the past, but they now have more size, depth, skill and — if they can stay healthy — they will have more guys who can handle, pass, shoot and make good decisions with the ball.

To keep the team spirit alive and healthy, Wilson said, “We’ve done a lot more team building, team bonding, team unity, team chemistry exercises and we’ll continue to do that because that’s the biggest part. If we’re playing as a team, we have a better chance of winning.”

But Wilson said he wants Pepperdine students to come out and support the players at their games more, especially the ones at home.

“I wish there was a way where the students could get down here more often. Where it’s not really separate. Where they can feel what’s really going on here,” Wilson said. “I wish there was a way to connect better that way because I think if the students came down here and supported the different programs, we’ll be better. You play harder, you do more things when you’re supported and when there are people in the seats. I wish there’s a way to bridge that gap.”

When asked what Pepperdine students can expect from this upcoming season, Wilson said, “I guarantee they will find a team that’s going to play hard, that’s a guarantee. Our team will defend. That’s something we hang our hats on.”

The Waves will play in Malibu against Cal Poly on Nov. 11 in Firestone Fieldhouse at 7 p.m., and Wilson said he hopes to see as many Pepperdine students and supporters there as possible.

“We will be unselfish. We will be united. Those are things that are mandatory,” Wilson said. “I don’t believe in guys being selfish and trying to do their own thing. They will see guys play with passion and with energy. As the students see that, they will want to come back and continue supporting.”