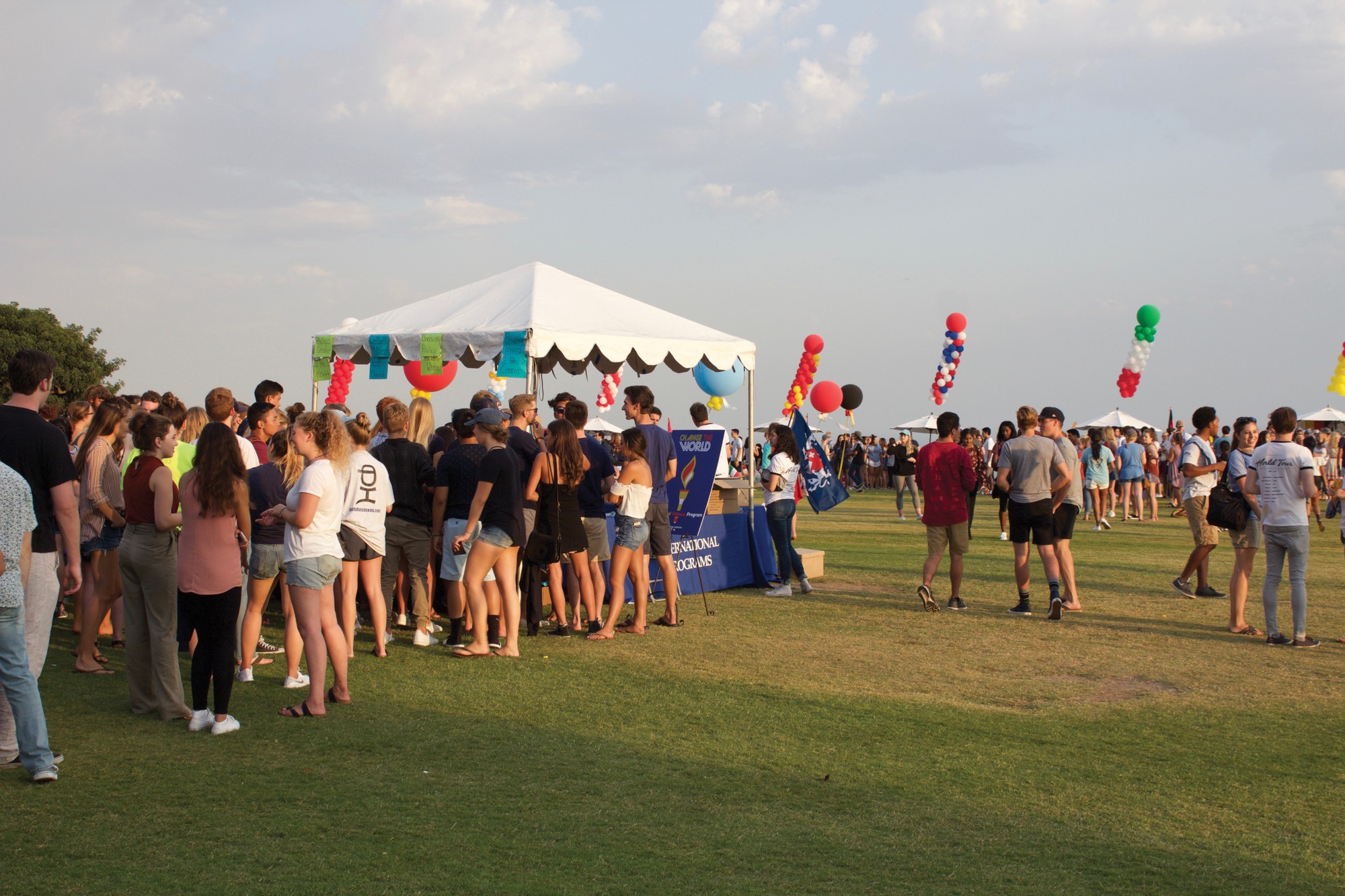 As incoming students consider applying to Pepperdine’s International Programs, The Return offered freshmen a tour around the globe to learn about seven different countries in a few hours Thursday, Aug. 31 at Alumni Park.

The Return is an annual event hosted by Pepperdine International Programs to help first-year students learn more about the various Pepperdine abroad programs located in Buenos Aires, Washington D.C., Florence, Heidelberg, Lausanne, London and Shanghai. The event was also a welcome back reunion for the students returning from abroad.

“It was the best year of my life,” said junior Karrie Wong. “Not only did I make friends within the Shanghai program but also with the locals. I’ve grown in ways I would have never imagined in freshman year.”

Ranked by The Institute of International Education as the No. 1 university in the nation for study abroad participation, about two-thirds or more of Seaver students study abroad during their time at Pepperdine. Participating in an international program has become an important part of the Pepperdine experience.

Junior Jessica Dimaano said what she missed most about being abroad was the ease of travel in London.

“Public transportation is awful here in Southern California, but the Tube is so easy to use in London,” Dimaano said. “There are so many different things to experience and there’s something for everyone.”

Dimaano added that despite her nostalgia about living in London, she was excited to be back in Malibu. She said she couldn’t wait to see how abroad friendships would develop now that everyone was back.

In the midst of all the free food and socializing, IP hosted a raffle for potential abroad students offering one lucky winner a $1,000 scholarship prize. Students received “passports” to get stamped at each program table after speaking with former students who studied abroad.

Each program had different ways of attracting first year students to their table. The Buenos Aires program set up a tent decorated with string lights while the Lausanne Program had students running around with Swiss flags.

“I really enjoyed The Return, and I was able to learn more about each program through speaking with students who had just returned from abroad,” said freshman Abduwwah Shlash.

Shlash said he was also torn between the Lausanne and Heidelberg program.

“I am in the 3-2 engineering program, so the courses I can take abroad are limited, but I just can’t pass on this once in a lifetime opportunity,” said Shlash.

Although The Return serves as a welcome event for students to explore the various international programs, activities such as tug-of-war added a competitive element to the evening. Students gathered in the center of Alumni Park and cheered on their friends as different programs competed against each other in a tournament style. The champion of the much anticipated game was the Heidelberg program who had won consecutively for the past three years.

As the sun set on Alumni Park, students, new and old, huddled around a projection screen to watch The Return videos created by their respective program’s media producers. One by one, there were random bursts of laughter and cheering as each group reminisced over their time abroad.

“After seeing the video, I realized how much I missed Lausanne and how much I’ve grown,” said junior Tammy Hong. “Living in a foreign place with so many strangers was intimidating at first, but after countless 3 a.m. trains and delayed flights, we’ve developed such a close bond with each other. I know that every relationship formed in Lausanne has played a critical role in my abroad experience.”

“Pack light and travel with an open mind,” she said. “Don’t be afraid to say yes to new experiences and definitely reach out to people.”

For students applying to study abroad this year, applications for the 2018-2019 academic year and 2018 summer international programs opened on Friday, Sept 1. Priority application deadline is on Monday, Sept. 25.