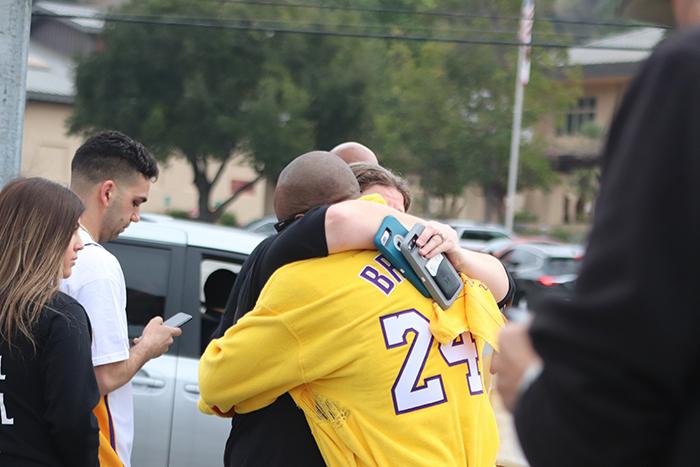 A fan in a Kobe Bryant jersey consoles an emotional mourner near the crash site at Las Virgenes Rd. and Willow Glen St. in Calabasas. | Photo by Ali Levens

Basketball fans around the world are mourning the death of former Los Angeles Laker Kobe Bryant. The 41-year-old NBA legend died Sunday morning in a helicopter crash, along with his 13-year-old daughter Gianna and seven others.

The crash occurred at a remote hillside east of Las Virgenes Road in Calabasas shortly before 10 a.m., nine miles from Pepperdine’s Malibu campus. The Federal Aviation Administration and National Transportation Safety Board are investigating the cause of the crash.

Los Angeles County Fire Department received a 911 call at 9:47 a.m. about a potential helicopter down and a brush fire, according to LACFD Chief Daryl Osby.

“Upon arrival, our firefighters discovered approximately a quarter-acre brushfire that resulted from a crash on the hillside,” Osby said in a press conference.

#LIVE: We are at the scene of the deadly helicopter crash in #calabasas where Kobe Bryant and one of his daughters, Gianna are confirmed dead. pic.twitter.com/AKfWqtSUeU

A memo from the NBA to its employees confirmed that Gianna also died in the crash, according to a tweet from Sports Illustrated’s Chris Mannix.

Bryant, Gianna and the other passengers were on their way to the Mamba Sports Academy in Thousand Oaks, according to the New York Times. 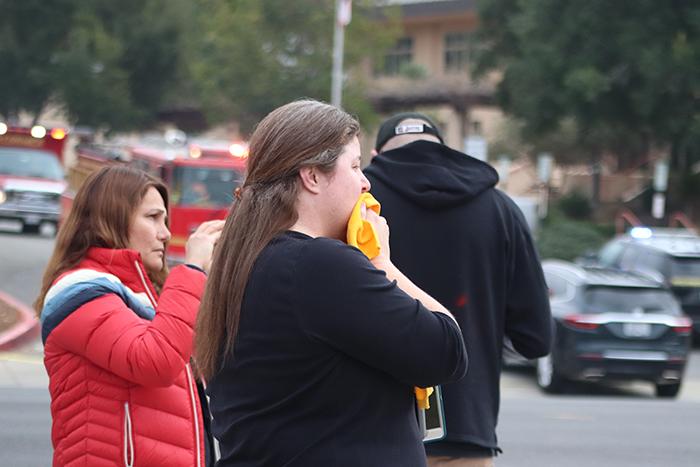 Approximately 400 people came to Calabasas to pay respects to Bryant near the crash site. | Photo by Ali Levens

Following the 911 call, Osby said the response time of authorities to the scene was eight minutes. LACFD’s initial response was 15 first response vehicles and 56 personnel, and the team extinguished the brush fire in about one hour, according to Osby.

“The fire also included magnesium [from the helicopter], which is very hard for our firefighters to extinguish because magnesium reacts with oxygen and water,” Osby said. 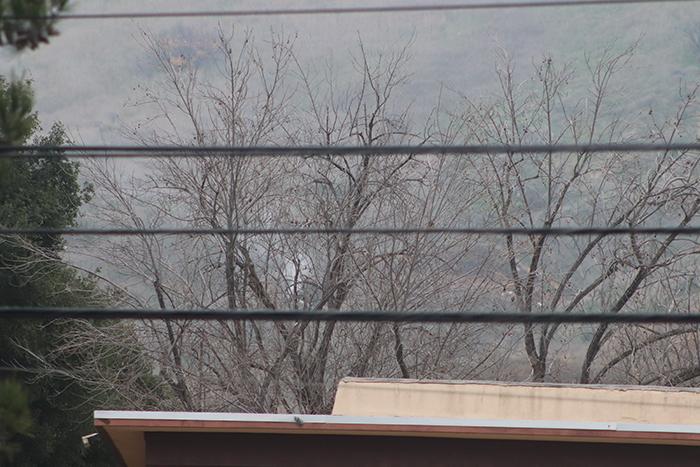 Smoke continues to billow from the crash site, more than three hours after the crash. | Photo by Ali Levens

Christina Mauser, a girls basketball coach from Costa Mesa, also died in the crash, according to a tweet from Costa Mesa Mayor Katrina Foley and reported by CBSNews.

The helicopter involved in the crash was a Sikorsky S-76B. Bryant had been known to use that model going back to his playing days to avoid sitting in traffic, according to Business Insider.

Shortly after the crash, fans gathered outside Staples Center in West LA, where Bryant played every home game of his 20-year NBA career. Officials asked the crowd to relocate due to the 2020 Grammy Awards, according to FoxLA. The crowd grew outside the arena and made memorials, chanting “Let’s go, Kobe.”

The City of Calabasas is designating the grass area near the basketball courts of Juan Bautista de Anza Park as the site to pay respects to Bryant.