Car break-ins have surged in Malibu, but in Santa Monica, the city is facing more than the typical smash-and-dash break-in scenario. Thieves are now using universal or booster keyless entry remotes to gain access to unattended vehicles.

If a car’s engine doesn’t have a turn-key start, then it has a push-to-start keyless entry system. Burglars are now using the convenience of keyless entry to their advantage by unlocking cars using a universal key that lets them into whatever cars the burglars try and are able to get access to, or by boosting signals from the keys in the owner’s home or at a nearby location to break into a car — without smashing or jimmying a window. 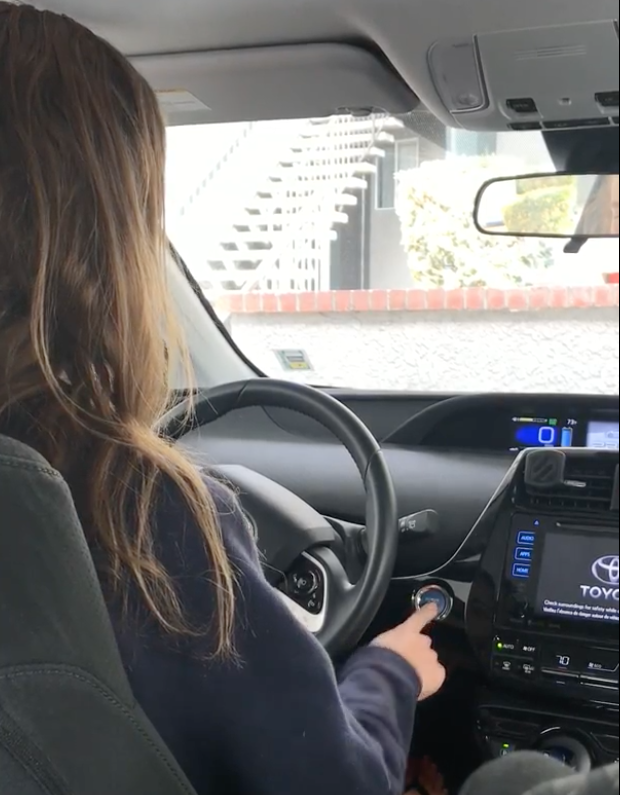 When Professor of Communication Theresa de los Santos walked out to her car on a Saturday morning in February, she said she saw her Acura MDX’s passenger door and trunk hanging open with all of the vehicle’s contents chaotically strewn about.

“They went all through my trunk. So books, papers and actually a Halloween costume that I had in my trunk that was in a bag, they just threw kind of everywhere,” de los Santos said. “So they spent a significant amount of time in my car.”

Because de los Santos was positive her car was locked before she left the vehicle parked on the street the night before, she said the Santa Monica Police Department (SMPD) confirmed to her that the burglars likely used a booster keyless entry remote, enabling them to unlock her car by using the signal from her keys in her townhouse.

If a car’s engine does not have a physical turn-key start, it operates with keyless entry.

Have you heard of a universal keyless entry fob that has been used by car burglars to gain access to cars with keyless entry?

De los Santos said the break-in was particularly alarming since it was the third she had experienced within the past couple months, and the second in which she suspects a booster remote was used to gain access to her car. In both booster remote-related incidents, nothing of value was taken, but her glove box, sunglass holder, and personal items in the car were open and strewn about.

In another incident just after Christmas, burglars smashed de los Santos’ window, stole her purse, backpack and laptop, and screeched off from an attended parking lot at a Starbucks in Santa Monica.

“Over the span of two months, to have your car entered three times, every time you feel violated,” de los Santos said. “When it happens, you just have this sense of, ‘Somebody was in my space. They were going through my stuff.’”

De los Santos said the SMPD cautioned her to purchase a lock box to put her key in that would prevent burglars from picking up her key’s signal through a booster remote.

Deputy Mike Ranes, traffic investigator at the Lost Hills Sheriff’s Department (LHSD), said most break-ins occur on unlocked vehicles or those with valuables in sight. As far as the universal or booster keyless entry remotes are concerned, he said he has heard rumors of their existence but couldn’t confirm any cases of them being used in the LHSD’s jurisdiction.

“If somebody can remotely open somebody’s car, it’s hard — unless you catch somebody with it, it would be hard to determine if they’ve actually used one,” Ranes said. “Unless somebody’s been caught with it, and I don’t know if anybody has been.”

The remotes boost the signal from the vehicle’s owner’s keys, if they are within a couple hundred feet, said Joel Gross, a Santa Monica resident. That was what the SMPD told him after his vehicle was broken into at his apartment complex, AO Santa Monica, in February 2017.

But in Gross’ case, the signal was not boosted; rather, the burglars likely gained access through a universal remote that did not boost the signal off his key, since his apartment is too far from the parking garage where he parks his car overnight.

“The cop showed up, he inspected for damage so he looked at the windows to see if they jimmied it or whatever, didn’t see anything and based on what I had told him, he figured they probably had some kind of universal key fob type deal,” Gross said.

To prevent burglars from using booster remotes, de los Santos has been placing her and her husband’s keys in an old stainless steel container because the metal is supposed to block the boost of the signal. She said some people are also placing their keys in the freezer, but she hasn’t tried that.

“Everything we’ve been told is just keep your key signal far enough away or locked up so they can’t intercept, but if it’s a universal key, you’re just totally out of luck,” de los Santos said. “I don’t even know what you would do in that case.”

Keyless entry vehicle owners can avoid shelling out extra money on a special lock box that the key’s signals from potential burglars with booster remotes by putting the key in a microwave, wrapping it in aluminum foil, or lining a box in aluminum foil and placing the key in the box when it isn’t being used, Kim Komando wrote in a fox news article, “Why you should wrap your keys in aluminum foil.”

Professor of Communication John Sitter’s car was broken into through a smashed window in a Santa Monica parking garage just before Thanksgiving, and he said he was so traumatized by the experience that he traded in his car for a new one.

“The car, I didn’t feel like [it] was going to be the same after all that happened,” Sitter said. “I literally felt that violated by it.”

He has now joined a neighborhood watch committee that his neighbors created to combat rising crime in his area.

“The amount of taxes that I pay to live in the City of Santa Monica, because it’s an expensive city to live in, you would think that they could cover it,” Sitter said. “But I think because of all the development that’s going on and the crime that’s risen — some people blame the train, some people blame the development, whatever it is — the police are overextended and they’re finally admitting it.”

When a vehicle is burglarized and more than $950 worth of valuables are stolen, the case is considered grand larceny, and less than that is considered petty theft, Ranes said.

Sitter’s laptop and two external hard drives were taken from his vehicle, he said. Both Sitter and de los Santos’ second break-in would be considered grand larceny, so the police dusted both vehicles for fingerprints to try and match them with criminals in the police’s databases. So far no results have turned up in either case.

Ranes urged the community to avoid leaving valuables in vehicles and if they are left in vehicles to make sure they are hidden from sight to avoid tempting burglars. He said break-ins happen most often when a car is left unlocked or if valuables are left in-sight.

“Generally, if there’s nothing valuable in the car, and the car is locked, they’ll flip the handle and they’ll just keep going on to the next one,” Ranes said. “Unless they see something inside that they want.”

The Santa Monica Police Department did not respond to a request for comment by the time of publication.

Gabby Gonta contributed to this report.