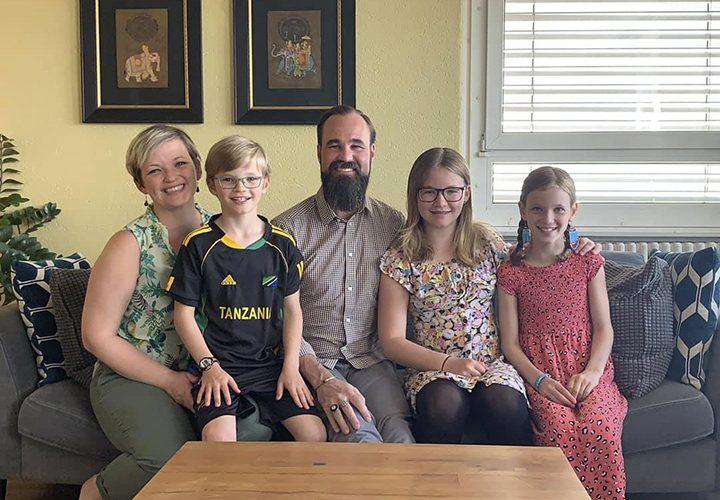 Lausanne Director Ezra Plank poses with his wife, Emily, and kids for their Easter 2020 photo at their home in Lausanne, Switzerland. Plank and his family spent several months in lockdown after the Lausanne program was suspended in March. Photo courtesy of Ezra Plank

Ezra Plank, the Lausanne International Program director, misses many aspects about having students in Lausanne.

Since sending the spring 2020 cohort home early due to COVID-19, Plank said he misses the classroom interaction, the energy in the facility, the relationships formed between students and especially the inner transformation he gets to witness throughout the year.

“Saying goodbye to family is always hard,” Plank said. “When you have the entire program being suspended prematurely — for all that to be cut short […] was incredibly difficult.”

Plank shared his experiences living in Lausanne over the past seven months, from watching the students leave in March to prepping for the next program participants and bracing for a possible second lockdown in Switzerland.

Plank is a Seaver graduate (1999) and an International Programs alumnus himself. The summer after graduating from Pepperdine, Plank began working in the Office of Convocation and Student Ministries, where he worked for the next seven years — notably developing the Spiritual Life Advisor position during his time. He left Pepperdine to begin graduate studies and earned a doctorate degree in church history.

After receiving his doctorate, Plank heard about the opening of the Lausanne director position and has spent the past seven years living and teaching in Switzerland.

Like the other directors, Plank had never witnessed a program suspension before. For Lausanne, the suspension came shortly after the cohort returned from their Educational Field Trip to Tanzania.

“For me, the writing was on the wall,” Plank said. “I knew if we had a student who was infected, it would spread to others, and they would all send it back home. I felt like the responsible thing was to make sure that we got flights and we could get students home.”

“It felt like someone kicked me in the stomach,” Plank said. “I pulled in my closest staff, and I said, ‘It is just a matter of time,’ and we began to weep.”

This end of the semester atypical for Plank, as he was able to get to know so many students both during the academic year and the spring semester and he was expecting a hard goodbye in April, but watching it end prematurely was jarring.

“There was a sense of loss — a sense of mourning for what we know should have been,” Plank said.

At that point in March, Plank and his program staff remained certain there would be a Lausanne summer program and continued to prepare both the program facility and the students for the experience amid COVID-19. Come April, that reality faded, Plank said.

“There was a lot of disappointment,” Plank said. “We had been communicating with students, we’d been hyping them up, we’ve been preparing them so they would be ready for the experience, and then to say it’s not happening was incredibly disappointing for them. But all of this effort that we had put in was disappointing to lose.”

The program continued to prepare for fall and for the EFT to Morocco, an annual tradition for the program, Plank said.

The trip to Morocco is especially meaningful because of the amount of preparation that goes into both the students’ educational experience — readying them to engage in Islamic culture and to understand the political and educational systems — as well as the relationships Lausanne program staff members have built with partners in-country. 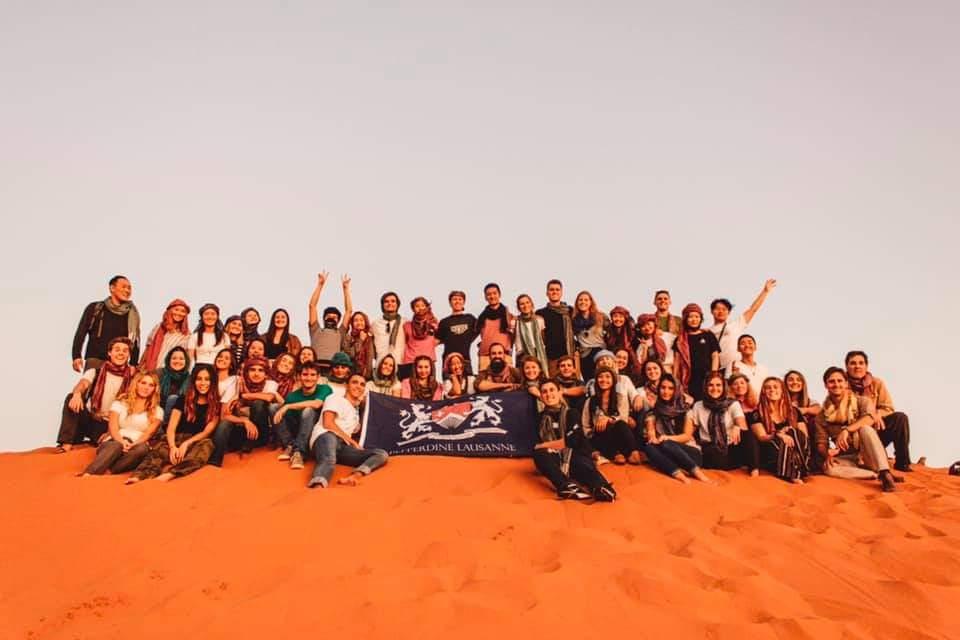 The fall 2019 Lausanne cohort cheers for a photo in the Sahara Desert. The Lausanne program was planning an annual trip to Morocco for the fall Educational Field Trip, but this year's trip, along with the fall 2020 program, was canceled due to COVID-19. Photo courtesy of Alicia Yu

“All of the details, all of the planning, all of the love and effort that we put in those ways, again, evaporated, and so this cycle has gone on,” Plank said.

Seven months later, Plank said fatigue has set in both within himself and in the world at large.

“When we went into lockdown — I mean, you probably saw it on your social media channels where people are like, I’m trying out this new recipe, I’m doing this craft, I’m doing excellent,” Plank said. “Everyone was productive and creative and telling everybody what they were doing, but now it’s just exhaustion as you plan for something and it doesn’t come about.”

Switzerland saw a spike in COVID-19 cases in late March and early April but controlled the spread of the virus by summer. During this time, Lausanne shut down to only essential businesses such as grocery stores and hospitals, Plank said. Prohibited events included weddings, funerals and church services, and residents limited their social interactions.

In June, the country began to reopen with looser restrictions, allowing for groups of up to five people to dine at restaurants or go to parks, Plank said. Since then, case numbers rose, and in October, the county saw a second wave of cases with 3,000 new cases on Oct. 21 alone. Plank said government officials leading the COVID-19 effort in Switzerland are moving the country into a second lockdown and creating more restrictions.

For Plank and his family, the first lockdown was difficult because he and his wife had to homeschool their three children for eight weeks on top of juggling their own jobs.

Now the Plank said his family hopes schools will stay open during this second lockdown so they don’t have to do it all again.

Throughout Lausanne, people have been intentional to wear their masks, Plank said, whether that’s running, sitting down at a restaurant or using public transportation. Hand sanitizer stations are plentiful, and many stores and restaurants check patrons’ temperatures prior to entering.

The Lausanne faculty completed spring semester teaching remotely, with some able to come to the program facility — the Maison du Lac — to record lectures, but most remained at home due to COVID-19 precautions, Plank said.

Half of the house staff remained employed in early spring, but after the suspension of fall semester, all staff transitioned to receiving federal unemployment for the time being, Plank said.

The Lausanne program assistant directors and finance and Human Resources director continue to work, and much of Plank and his colleagues’ preparations have shifted to future projects, such as renovations of the new program facility in Vevay — an 18th-century chateau and the surrounding grounds. 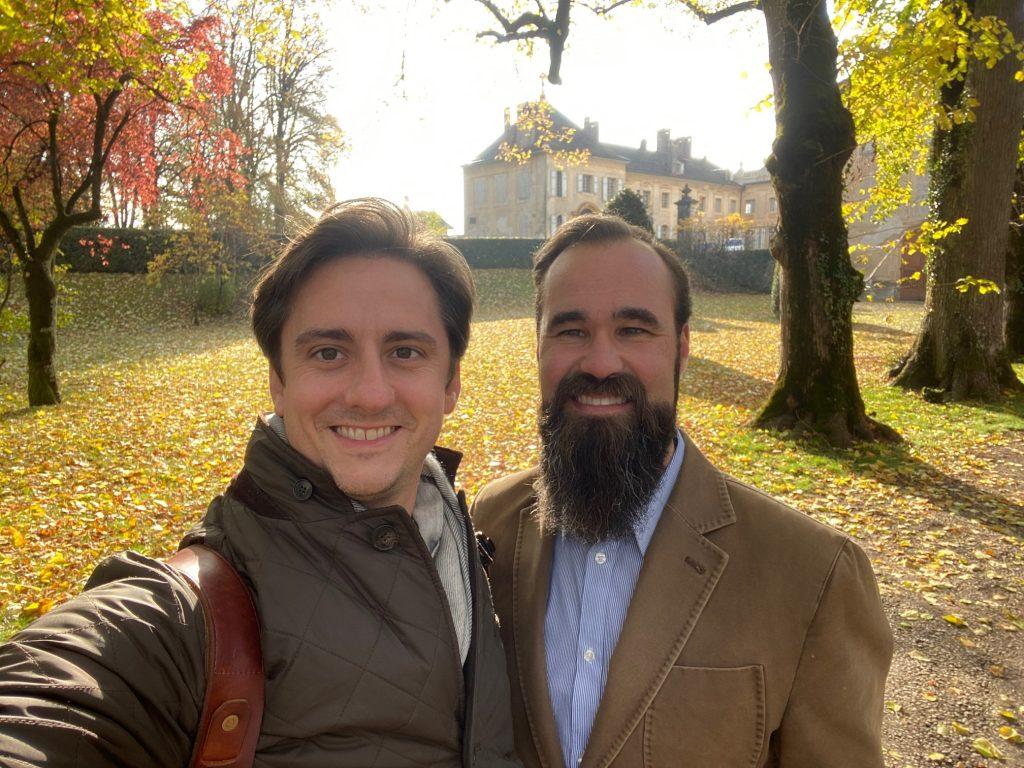 Associate Director Mark Barneche and Plank smile for a photo in front of Chateau d'Hauteville earlier this year. The chateau was built in the mid-1700s and will serve as the the program facility for Lausanne participants as soon as 2023. Photo courtesy of Ezra Plank

“As we look toward the spring, our hope is that spring will run,” Plank said. “We’re planning for the spring semester — all of the details are in place if we need to do social distancing — to make sure the students who come have a wonderful educational experience that’s safe and guarantees their safety in that way.”

During this time without students, Plank said he has also reflected on the role of study abroad in higher education and how being exposed to different people, places and experiences than one’s own can broaden students’ knowledge of themselves and of others.

“I think that’s why, as International Programs directors, we love what we’re doing,” Plank said. “We see students come in September, we see them leave in April, and they’re different people. We love this transformative experience and the chance to be engaged in it with students.” 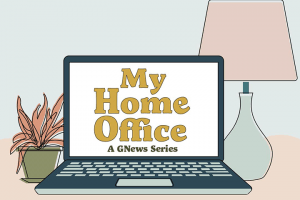 Freshman Abby Wilt is getting into the Halloween spirit at home with her furry friends. "My favorite part [of working...
Copyright 2013 Jupiter Premium Magazine Theme
Back to top