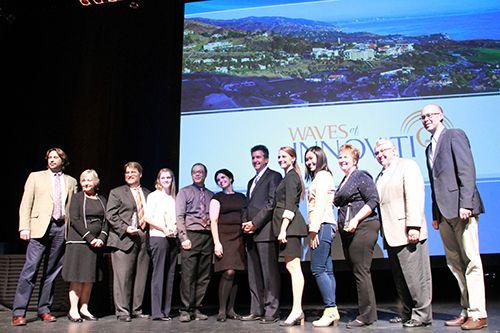 With just over a week since the first Waves of Innovation grants were awarded, the finalists face a new challenge — turning their ideas on paper into reality. Each idea had a three-year implementation plan prepared before the talks. Now, they must bring those large-scale changes to the campus and curriculum. For Founding Director for the Center for Sustainability Rhiannon Bailard, who received the largest grant for her proposal, this will be an extensive task as “The Eden Project” seeks to completely renovate a residence hall. Which hall this will be has yet to be determined. WIT is accepting applications until Sept. 15, 2014 for next year’s talks.

The youngest presenter, freshman SueJie Oh, and her roommate freshman Jennifer Escoto designed “College Connections” to unite Pepperdine students and inner city Los Angeles high school students in a mentoring program. Oh shared her experience growing up in an area of Los Angeles that was accustomed to gangs, crime, poverty and a significant number of high school dropouts.

“They’re not dropping out of school because they’re not smart enough,” Oh said. “College Connections” will provide LA students access to people who are willing to help. Since Pepperdine students have recently been through the college application process, Oh and Escoto said they believe they can be a great resource for high schoolers.

Applying to college is expensive, but “Connections” will show these students how costs can be cut by almost $1,000. Oh knows how much Pepperdine students enjoy giving back and believes there will be a positive response to the high schoolers. The first school that has agreed to partner with “College Connections” is Thomas Jefferson High. Oh and Escoto received a grant of $35,000 to help start the program.

Technology is becoming the new wave of education, a fact well-known by GSEP Adjunct Professor Mark Chen and GSEP doctoral student Victoria Stay. Their WIT talk revolved around the “Center for Gameful Design,” an initiative to bring game-centered learning to post-secondary education. The plan focused on using games as an assessment tool for students, as well as providing researchers and game designers the chance to study gaming practices. Chen and Stay’s energetic presentation won the audience-choice award of $500 and a $82,000 grant.

Another WIT presentation that will be kept in mind for the future was “The Doctorate in Global Leadership Ph.D.” by GSEP professor June Schmieder-Ramirez. This proposal sought to implement a Ph.D. in Global Leadership at the Washington, D.C. campus. Schmeider-Ramirez’s “Circle of Life” video montage showed how the program would involve all five Pepperdine schools. Her mantra, “Why not?” was the basis for her idea.

Mirroring the “green” theme was Associate Professor of Chemistry Joe Fritsch with his plan to create “Biodegradable Plastics Prepared with Optimized, Environmentally Friendly Catalysts.” Fritsch and his team have been incorporating natural elements like zinc, magnesium and aluminum into their plastics.

“No one else does magnesium and zinc,” sophomore Reile Slattery, an undergraduate working alongside Fritsch, said. She said other materials used to make plastic cause much pollution. “It’s not good to put tin into the ground,” she said.

Besides having biodegradable cups around campus someday, Fritsch said in his presentation that this research may also spark “new patentable products,” bringing a new level of innovation to the Natural Science Division. They were awarded a total of $69,300 to continue research.

Named by Distinguished Professor of Biology Stephen Davis, “The Eden Project” will use their $150,000 grant to bring together faculty, staff and students to expand the eco-conscious community at Pepperdine. The need for “green” is growing.

Bailard said in her talk that 7 out of 10 students now consider a college’s sustainability before applying. Pepperdine has put certain eco-friendly efforts into effect, but there is much more that can be done to raise awareness and increase students active role in sustainability around campus.

The talk explained how students who live in the “green” transitioned residence hall will be surrounded by state-of-the-art retrofits, such as rooftop solar panels, a “green” cleaning plan and monitors that track energy usage. Bailard said the goal of the “The Eden Project” is for eco-conscious students to inspire other students, making sustainability “a part of who we are” at Pepperdine.

On the opposite end of the education spectrum, Dean of International Programs Charles Hall spoke of an idea to change the way future students will learn. His proposal, “Shipboard Education,” would be an extension of what International Programs has to offer. Students would live, travel and learn on a ship, visiting port cities and developing countries around the world. Hall said he believes students have limited exposure to the developing world and “Shipboard” could provide an experiential learning environment. Although “Shipboard” did not receive a grant, President Andrew K. Benton said it may be revisited in the future.

“Designing a Curriculum and Delivery System for Next-Generation Executive Students”

A change to the curriculum will be seen through GSBM’s Professor of Applied Behavioral Science Teri Tompkins proposal. Her idea received $83,000 in funding and will undertake the creation of a next-generation EMBA program. As online courses are offered at competitive universities across the globe, Tompkins’ program aims to bring that technology to Pepperdine.

“Designing a Curriculum and Delivery System for Next-Generation Executive Students” will offer face-to-face online class sessions for students at Pepperdine, around the country and outside of the United States. Tompkins said the program will customize learning and give students access to cutting-edge topics, noting that “technology is changing education.”

Continuing to seek education after leaving the college classroom is just as important, according to Professor of English Michael Ditmore and Associate Professor of Public Policy Ted McAllister. Their WIT proposal, the “Pepperdine Executive Preceptorial,” was granted $26,400 and aims to unite a small group of professionals who strive for further educational stimulation.

The basis of this group would be “dialogue, exchange and connect,” resembling a simple, old-school book club. Ditmore stressed the importance of intellectual intimacy in his presentation, saying the groups will focus on “mature, healthy, invigorated dialogue.” Classic works would be read and thought-provoking conversation would follow. The program would also help strengthen ties with alumni who want to participate and revisit their college days. 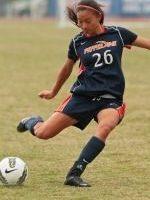 Photo Courtesy of Pepperdine Athletics On Jan. 17, Pepperdine’s Senior Michelle Pao was selected in the third round...
Copyright 2013 Jupiter Premium Magazine Theme
Back to top