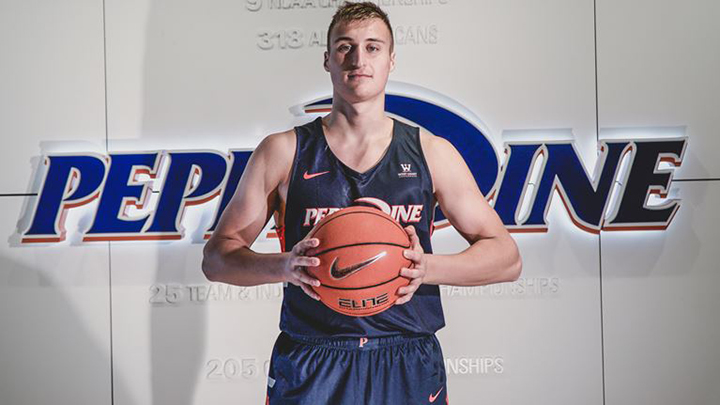 The Kingdome Arena in Seattle, Washington. The year is 1995. A 40,000-person crowd filled to the brim. A one-seed versus a two-seed.

This is what the curtain call of The Big Dance, or NCAA Basketball Tournament is all about. After being just a one-point game at the half, top-ranked UCLA outlasted Arkansas by a score of 89-78 and won the National Championship.

This callback isn’t to focus on UCLA star Ed O’Bannon or the matchup of future Hall of Fame coaches Jim Harrick and Nolan Richardson. It’s to talk about Pepperdine freshman power forward Jan Zidek, but his story can’t be told without first focusing on the career of his father George.

Jiři “George” Zidek was born in what was formerly known as Gottwaldov, Czechoslovakia, now called Zlín, in the Czech Republic. He comes from a basketball pedigree – George’s father, Jiří Zídek Sr., was a player for USK Slavia Prague in the 1960s and 1970s and led them to victory in the European 2nd-tier level 1968–69 season’s European Cup Winners’ Cup.

“He was just such a hard worker,” Romar said. “As a coach, you’re drawn to somebody like that. There would be opportunities where I’d go in the gym to work some guys out, and he would always be in there working on things. He just couldn’t get enough.”

After playing just four minutes per game his freshman season and nine during his sophomore campaign, he did not stop improving and never thought about returning home to play professionally in Europe. The UCLA coaches noticed.

“He had a passion for being as good as he could,” Romar said. “He did all of it with a 3.8 GPA and was a very squared-away, take-care-of-business guy. Coaches want to see guys like that do well.”

Beginning his junior season, George did just that. He started every game and averaged 11 points and seven rebounds per contest. As a fifth seed, UCLA was upset by 12th-seed Tulsa in the first round of the 1994 NCAA Tournament. Harrick, who was at the helm for UCLA for seven seasons prior, did everything in his power to not let that happen again.

In the 1995 regular season, the Bruins stormed through the regular season going 31-2 and securing a number-one seed in the Midwest division. They took down Florida International, escaped Mizzou, handled both Mississippi State and UConn before bouncing Oklahoma State in the Final Four. Their final task was the defending champion Arkansas Razorbacks, with Richardson, a future NCAA Hall of Famer, as the head coach.

UCLA ran past Arkansas to win its 11th NCAA title, the first since John Wooden’s final season in 1975. In the game, George scored 14 points and grabbed six rebounds, both stats slightly higher than his season averages.

After his senior season, George entered into the NBA Draft, where he was selected in the first round, 22nd overall by the Charlotte Hornets. He was the first Czech player drafted into the league. He played for the Hornets, Denver Nuggets and Seattle SuperSonics in three total seasons before returning to Europe to play for the Lithuanian powerhouse Žalgiris, where he won a EuroLeague Championship.

George’s European career took him to several other teams before he returned to the Czech Republic, where he helped ČEZ Nymburk to Czech national league titles in 2004 and 2005 before retiring in 2006 due to knee injuries.

Jan was born on Dec. 13, 1999, in Prague. Last season, he played with the BK Wolves Radotin during the 2018–19 season, which won the championship in the Czech Republic’s second division. He began playing with USK Praha (Prague) at the age of nine and stayed with that club throughout his junior career.

“I really come from a basketball family,” Jan said. “Ever since my second grade, I knew that’s what I wanted to do. I played with USK all my life, and I feel it’s done a good job preparing me for here.”

Growing up, Jan focused on mastering his craft in Prague instead of actively looking for opportunities to play in the U.S. It wasn’t until he was a teenager where he realized that playing in college was a possibility.

“I didn’t think of recruiting that much,” Jan said. “I was always the best among my peers. It wasn’t until three years ago when I saw that it could happen. I talked a lot about it with my dad because it’s impossible to get an education while playing basketball. They’re both full-time jobs in a sense. There’s just no chance.”

Romar said he can remember the day during his first season back as the head coach of Pepperdine that he found out about Jan.

“I knew that George had a son, but that was a while ago,” Romar said. “We were sent videotape that someone had shot and that George got together, and that’s when we first saw him. We quickly realized that, OK, George has a son that can play.”

As he became a prospect, Jan said he was thrilled at even the possibility of following in his father’s footsteps. He said he remembers the first time he met his head coach.

“I met Coach Romar on a recruiting trip here,” Jan said. “It was April 2019 and such a good experience. The first time I spoke with him I knew he was a skilled coach just by how he could talk basketball, and I knew that he was a really good person.”

Jan was offered a full-ride scholarship to Pepperdine shortly after. Despite his father’s great success at UCLA, the Bruins didn’t show the same interest in Jan.

“I talked to Cal Berkeley and Northern Arizona,” Jan said. “I was in contact with UCLA for a little bit, but they didn’t offer me a scholarship. They only had one scholarship offer left, and they were looking for a guard. I’m a power forward, so it didn’t work out. Regardless, I’m happy I landed here.”

Jan’s Role on the Team

Zidek said he looks to add depth and some scoring to a thin Pepperdine front court. Pepperdine saw Darnell Dunn graduate last season, a senior who was only 6’6″ but started all but six games at the center position. Exciting Oregon transfer M.J. Cage left the team this offseason. That left sophomore Victor Ohia Obioha as the only center on the roster that started a game last season.

Pepperdine is a team that traditionally goes small, as both Kameron and Kessler Edwards, 6’5″ and 6’8″ respectively, will often be the biggest players on the court for the Waves and have to defend opposing 4s and 5s. That leaves the door wide open for Jan to push for playing time as a valuable bench scorer.

His playing style has the potential to rise to the occasion.

“I think my biggest strength is my shot,” Jan said. “I can knock them down from almost every spot on the court. I’m also trying to be an all-around player, working in some low-post game. I also like to one-dribble pull-up — I can get set with long-range three-point shots. The biggest things I’m working on are the physical sides, like getting stronger and a bigger frame to play on the highest level.”

Romar agreed that Jan’s style adds a dimension to the offense.

“There are few players in the country who can shoot the ball at 6’9″ the way that he shoots the basketball,” Romar said. “Such a phenomenal shooter — when he gets his feet set, you’re actually surprised when the ball doesn’t go in. He also can put the ball on the floor and get to the rim. Overall, a very talented basketball player.”

With the season underway, Romar said he is ready for Jan and the team to keep making strides.

Jan said he is ecstatic for the rest of the season.

“I’m really excited for my first college season,” Jan said. “There’s going to be some new experiences, and I will try to do my best to help the team do the best things.”

Pepperdine will travel to Abilene Christian to play the Wildcats this Saturday at 5:30 p.m. 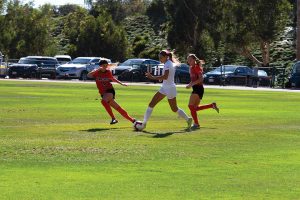 Photos by Austin Hall Their ticket is stamped. Pepperdine Women's Soccer will play in their sixth NCAA Tournament in eight...
Copyright 2013 Jupiter Premium Magazine Theme
Back to top