The gadget-filled space, with floor length windows that face the second floor of Payson Library, is home to Pepperdine’s center for emerging technology: the Genesis Lab.

Open since fall 2017, the Lab offers classes, one-on-one training and free use of virtual reality (VR) technology, 3D printers and eSports gaming systems to students. The Lab added the latest in VR to its collection this semester.

“The Lab is intentionally open ended,” Genesis Lab Director Landon Phillips wrote in an email. “It is structured as a place to foster creativity, learning, networking and socializing. For example, you could come to a workshop to learn about a cool new skill like cooking with molecular gastronomy, coding or 3D model making.”

Librarian for Emerging Technology Anna Speth said the Lab has experienced tremendous growth since its opening.

“We’ve seen increased usage all of the time,” Speth said. “It’s gone from just us and our student workers, to there being visitors in here at almost all times. We’ve gone from having maybe two classes a month to at least one class a week.”

In terms of technology, the Lab constantly gains new additions.

“Every year we try and add one major new piece of tech to our repertoire,” Phillips wrote. “Since opening, we’ve added a vinyl cutter for making custom stickers and T-shirts, additional 3D printers, and we have expanded our VR offerings.”

The Lab started off with one HTC Vive VR headset and one Oculus Rift VR headset. Both brands of headsets are fully tethered to computers, which Speth said make for high resolution images. 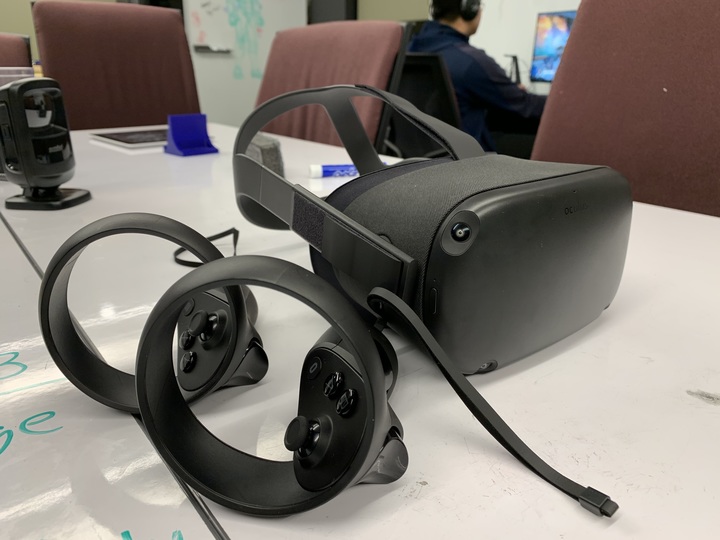 The Oculus Quest is the Lab’s most recent addition.

“Our newest offering for VR is the Oculus Quest,” Speth said. “This is a standalone headset, meaning it doesn’t have to attach to a computer so it is portable.”

Speth said last month they acquired the Oculus Quest headset, which was released in June in order to provide students with a more immersive experience.

“We also are building out our support of creating VR content,” Speth said. “Right now, there’s a big emphasis on that. It sounds really complicated, but you can take a couple of different routes.”

The first route is Unity Game Development, a software that all of the computers in the Lab support.

“It can be technically challenging,” Speth said. “But it’s really fun and there’s a lot more you can do with it, which does take some time.”

The second route is a 3D camera. The Lab has two of these for students to check out. 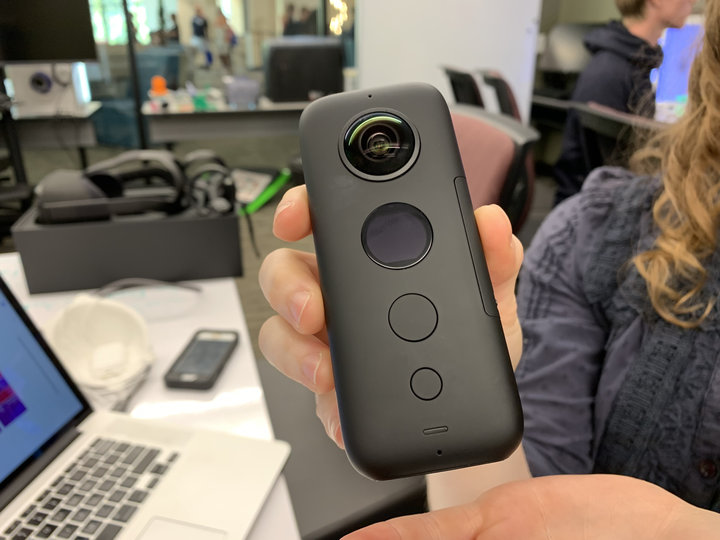 Speth demonstrates a 3D camera. It has one camera on the front and the other on the back.

“It has lenses on both sides, and it automatically stitches the two pictures together so that you have a complete shot,” Speth said. “You can just upload the video straight to YouTube, YouTube supports 360 video, and then you’ve created VR content.” 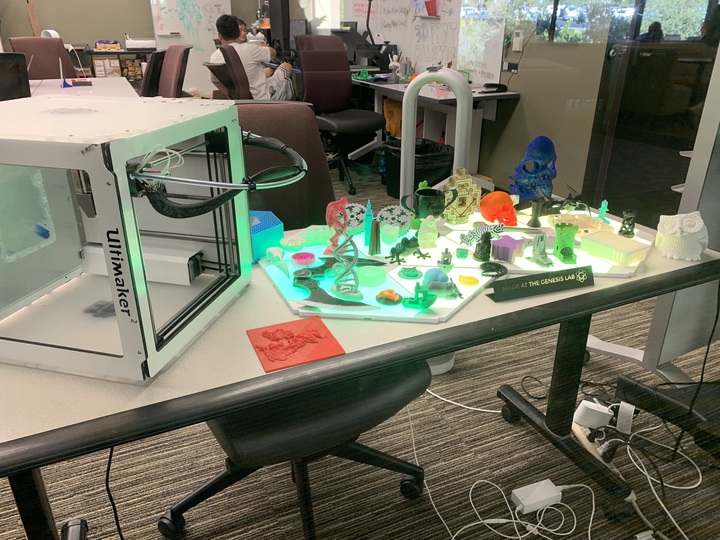 The Lab displays a 3D printer and recent student creations at the front window of the room.

Students in the Lab

From chemistry, nutrition and art classes, to individuals working on their “passion projects,” students of various majors have utilized the Genesis Lab to create outstanding work, Speth said.

“This semester alone, we’ve had a nutrition class come in and 3D print the different organs from the digestive system,” Speth said. “Then in class, they reunite them.”

The Lab has also partnered with inorganic chemistry classes to 3D print molecule models, as well as various props for theatre classes.

Senior Olivia Lara said she is undertaking the task of learning how to use Unity for her art class project.

“I’ve never worked in virtual reality before,” Lara said. “I just decided to start experimenting with it, and so I think what I’m going to try to do is create a mini world.”

Lara said her vision for the project is an explorable fantasy world, full of forests, castles and other objects she feels represent her essence.

“So you hold two controllers with your hands,” Lara said. “It’s really cool because you can shrink the world to make it super small or you can make it really big so that the castle is right in front of you, and you have to look up at it.”

Lara said although VR is still relatively new and developing, she predicts it will be a big part of the next generation.

“I feel like years from now, our kids are going to be looking back at pictures of us using VR and laugh at how big and clunky the headsets were,” Lara said.

“[The Lab] is one of the vanguards on campus that embraces cutting edge tech and puts it directly in the hands of students,” Phillips wrote. “Without taking risks and trying new things, we run the risk of becoming complacent and stagnant in our teaching, which won’t properly prepare students for the real world.”

The importance of familiarizing students with VR specifically, Phillips wrote, is its applicability in any industry.

“When the tech first came out, no one would think that ‘motion pictures’ would help convince you what brand of detergent to buy,” Phillips wrote. “But now video content is a part of our everyday lives and classrooms.”

“It’s really impactful way to get any point across,” Speth said. “There’s a lot of documentary work being done with VR on, for example, the refugee crisis, or taking people inside solitary confinement, or to different places where environment is deteriorating like the coral reefs or the Amazon Rainforest.”

Speth said she predicts the impact of VR will continue to grow as the technology continues to evolve.

“Even if you can’t build a VR application from scratch,” Speth said, “having been in the headset and knowing how it feels can be really helpful in giving you an edge as you enter the workforce.”