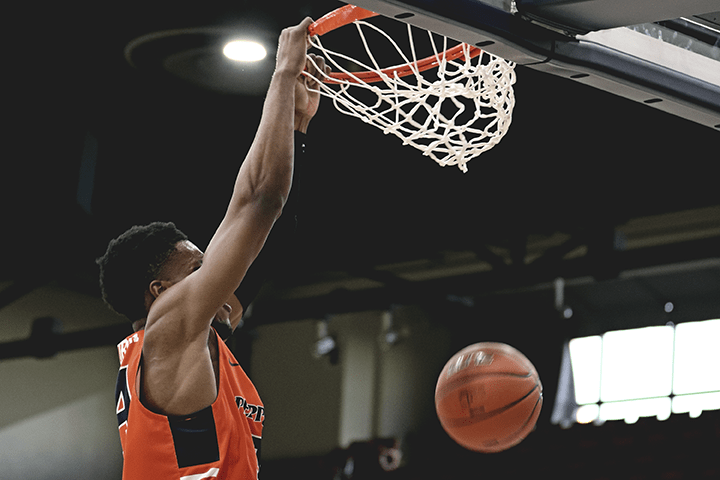 Junior center Victor Ohia Obioha swings from the rim after a victorious dunk in the first half versus the University of Portland in Firestone Fieldhouse on Jan. 16. Ohia Obioha scored 7 points in an 80–65 Waves victory. Photos by Ali Levens

Despite only holding one full–team practice in the the span of nearly a month, Pepperdine Men’s Basketball notched its first West Coast Conference win of the season Saturday in the Firestone Fieldhouse.

Junior forward Kessler Edwards led the Waves with 21 points, 9 rebounds and 4 blocks, en route to an 80–65 victory over the visiting Portland Pilots. The game was Pepperdine’s first since Dec. 23, and the win helped the team bounce back following a Jan. 14 loss to Gonzaga University.

“It felt good just to be back and have a home game,” Edwards said. “My teammates just kept encouraging me to be aggressive.”

Edwards continued his breakout season, in which he entered the game putting up 17 points, 6 rebounds and 1.3 blocks per contest. His 11 first–half points led Pepperdine to a 40–31 halftime advantage, and Portland never got within six points after the break.

“With Kessler, because of his versatility, everyone on [the opposing] team needs to know what his tendencies are,” Romar said. “Because anyone could be guarding him, because you can’t tell from one play to the next where he’s going to be on the floor.”

Fifth-year forward Kene Chukwuka, a graduate transfer from the University of Pittsburgh, logged 14 points and 7 boards, including 9 of the Waves’ first 14 points of the game.

Chukwuka missed three games due to injury prior to Thursday’s loss to No. 1 Gonzaga, and junior front court-mate Victor Ohia Obioha missed seven games in non-conference play, also with an injury. The return of both players was the silver lining of a two–week pause in team activities due to a positive COVID-19 test.

Following a short break for the Christmas holiday, the Men’s Basketball program received a positive test result Dec. 30, according to a release from Pepperdine Athletics.

The team postponed its first three scheduled WCC games, meaning that its matchup with undefeated Gonzaga, the top-ranked team nationally, was its first contest in 23 days.

While in isolation to prevent further spread of the virus among the team, the student-athletes performed strength workouts but only had one full practice leading up to the game. There was a 10–day quarantine, followed by a progression from non-contact to full-contact practice, according to Roger Horne, Pepperdine’s assistant athletic director for communications.

“We were continuing to get lifts in, the right way, with COVID and everything,” senior point guard Colbey Ross said.

Waves Fall at No. 1 Gonzaga

In Thursday’s game in Spokane, Wash., the Waves trailed only 43–39 at halftime, shooting slightly better than the Bulldogs but committing ten first–half turnovers. Gonzaga pulled away and win 95–70, their 40th consecutive victory over the Waves.

Pepperdine’s last win against Gonzaga came in Malibu in 2002. The late Basketball Hall of Famer Paul Westphal, who died Jan. 2, was the Waves’ head coach at the time.

Ross, who entered the week averaging 19 points per game, managed just 9 points at Gonzaga and 4 against Portland. In both games — in which at least 11 Waves saw playing time — the team’s depth lifted Ross.

“I know, if I’m not scoring, that someone’s going to step up and get the job done,” Ross said. “Basically, it’s next man up. That’s the mentality.”

Portland Win and Beyond

Ross acted as a facilitator against Portland, grabbing 8 rebounds and dishing out 10 assists. After halftime, especially, he led the Waves’ offense to a more smooth performance despite a quiet three-point shooting second half.

Junior forward Eddie Davis led Portland with 19 points, including 4 three-pointers, but the Pilots dropped to 0–4 in conference play.

“[Romar] just told us to get more ball reversals, and then once that happens, we can attack,” Ross said. “Things started open up once we did that. Kess got open.”

The deep bench provided energy in an environment where it’s hard to come by. The socially-distanced and masked benches, complete dearth of spectators and overall lack of noise make even exciting plays seem anti-climactic.

“We have our full complement of players,” Romar said. “Because we can rotate and have quality depth, guys can go to the bench and someone else can come in and do as good — if not a better — job, and it makes all the difference in the world.”

Romar was not impressed with the victory itself, which snapped a low point in which the Waves dropped four of five games dating back to Dec. 12. Expectations have clearly shifted in the coach’s third season, as eyes turn toward a conference title.

“I don’t think we played particularly well throughout,” Romar said. “That’s not to take anything away from Portland at all — but we should be a much, much better basketball team.”

Pepperdine committed 16 turnovers against Gonzaga on Thursday and another 16 against Portland.

Nevertheless, the decisive victory — in their first WCC home game — emboldened the Waves.

“Coach tells us all the time that we can compete with any team in the nation when we put our minds to it, and we believe that as a team,” Edwards said. “The fact that everybody’s back — we feel good.”

Romar said the team looks forward to a full week of practice prior to a home matchup with Pacific on Jan. 21 and a trip to Provo, Utah to play Brigham Young on Jan. 23.

The men now face a dense schedule of 14 WCC games in a span of 6 weeks.

“We just need one and then we can start going on a roll,” Ross said. “This is what we needed and we’re going to try to have that lead us into next week.”

Pepperdine Women’s Basketball also dealt with a COVID-related pause and postponed four WCC games. The Waves, who lost narrowly to PCH Cup rival Loyola Marymount on Saturday to fall to 0–3 in conference play, take on Saint Mary’s, Pacific and San Francisco in Northern California this week.