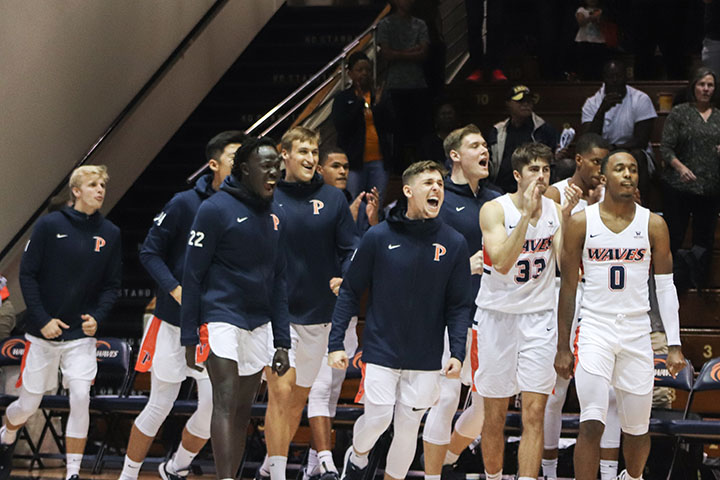 The energy in Firestone Fieldhouse seemed deflated, as the Waves appeared bound for an 0-2 start to their season.

In a 20-second span, the tables turned, as the sophomore forward Kessler Edwards and junior guard Colbey Ross connected on three-pointers to bring Pepperdine within three.

“At the end, we were able to hit a couple big shots, create some turnovers and come up with the victory,” Head Coach Lorenzo Romar said.

The biggest shot of the evening came from senior forward Kameron Edwards, older brother of Kessler. With 44 seconds to play, a possession after he made a floater to bring the Waves within one, Kameron took a pass from Ross and drilled a go-ahead three-pointer from the right wing, which put the Waves ahead 75-73.

Ross added two free throws with six seconds remaining, capping a game-ending 13-0 run for Pepperdine, which came away with a 77-73 win in front of about 1,500 fans.

“[Ross] drew two defenders — I was wide open, so I just rose up with confidence, and I luckily knocked it down,” Kameron said. 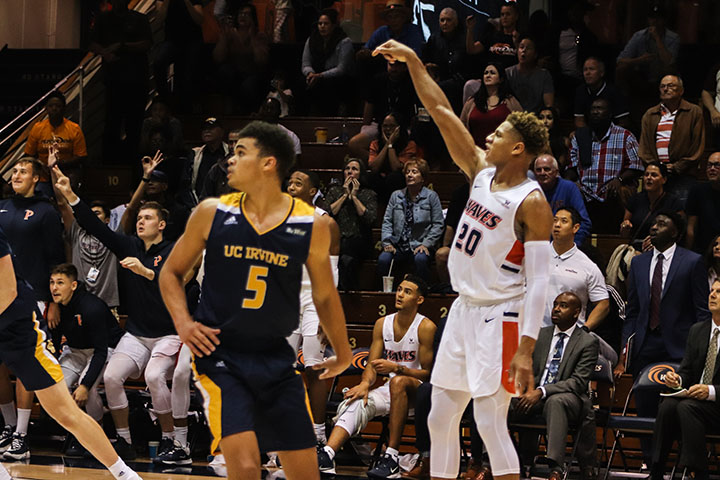 Kameron Edwards follows through on the game-winning shot.

Romar said the bench could tell that Kameron was confident in the shot.

“You could see on Kameron [Edwards’] face that as he was lining up, he shot that ball as if to say, ‘I bet I don’t miss this one,'” Romar said.

Kameron finished the game with 21 points and 10 rebounds, completing a double-double to lead the Waves in both categories.

“That’s what fifth-year seniors do down the stretch — they make big plays,” Romar said of his starting big man.

Kameron and the Waves endured a cold-shooting first half, in which UC Irvine jumped out to a 13-point lead with 9:02 remaining in the half.

Anteaters’ senior guard Eyassu Worku torched Pepperdine for 17 points in the first 11 minutes. Worku would eventually cool down, but he finished with a game-high 26 points.

“If you don’t guard, it doesn’t matter if you’re making shots,” Romar said. “We didn’t guard very well in the first half.” 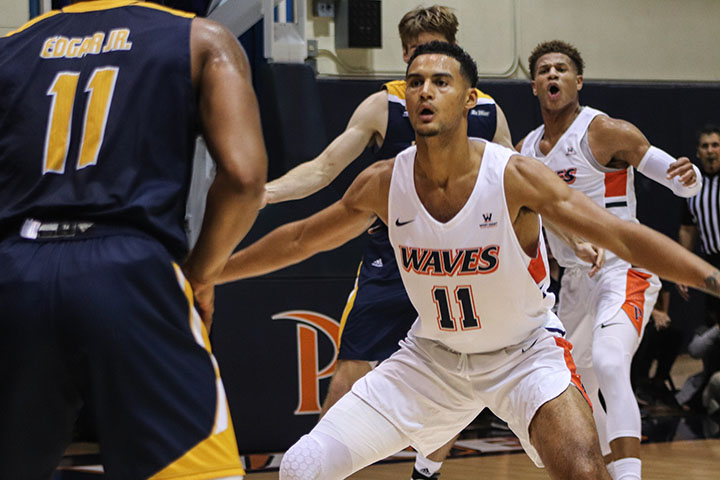 The Waves were able to remain close in the first half due to the efforts of Kessler, who scored 13 points to keep the Waves offense afloat. 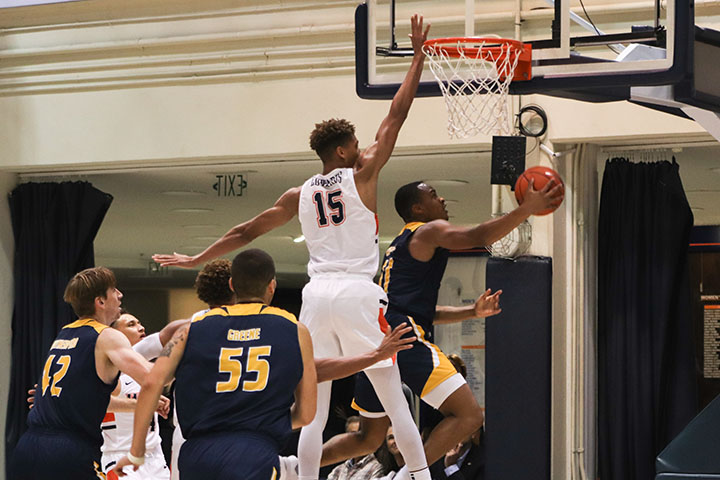 Kessler Edwards rises for a block attempt in the second half.

Sharpshooting guard Skylar Chavez also scored eight of his 13 points in the first half, the first career points in Firestone Fieldhouse for the junior transfer.

The Waves trailed 41-38 at the break as the Anteaters shot 56% from the field in the half. The defense tightened right out of the gate in the second half, as Pepperdine went on a 7-0 run and earned four defensive stops in a row.

“All the guys that [had] experience, we had been there before, so [trailing] wasn’t anything new,” Kameron said. “We knew to just keep our composure, play hard and we knew we could come back.” 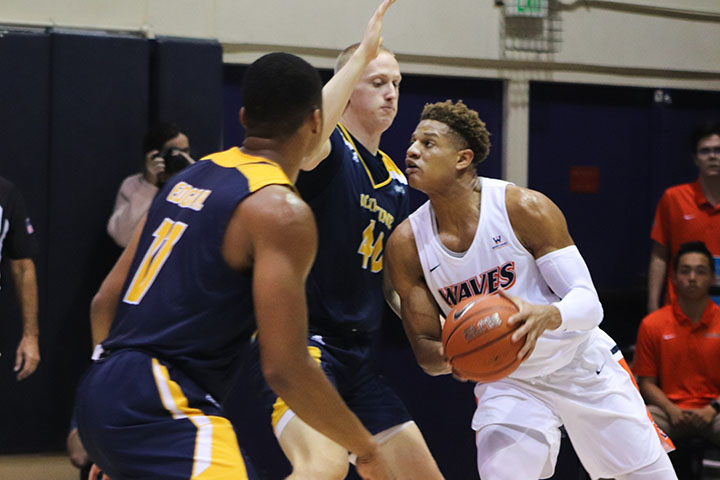 The Anteaters — coming off their best season in program history, in which they won 30 games including one in the NCAA Tournament — were seeking another road win against a West Coast Conference team. They had beaten San Diego by three Tuesday, Nov. 5, and were not about to go down quietly.

Worku scored nine points as Irvine reeled off an 18-6 run between nine minutes remaining and the final two-plus minutes.

“We had dropped our opener [against Cal Berkeley on Nov. 5], so to lose one at home and start off the year 0-2 would not bode very well with any of us,” Romar said.

The Waves’ dominant final two minutes, sparked by the Edwards brothers and Ross, who had five points and two assists in that span, ignited an excitable opening night crowd.

“We felt it tonight,” Romar said. “The crowd was behind us, and it was great as we gave them something to cheer about at the end.”

Ross finished with 13 points and eight assists, elevating him to fourth on Pepperdine’s all-time assists list. He is well on pace to reach the top of the list by the end of the season. 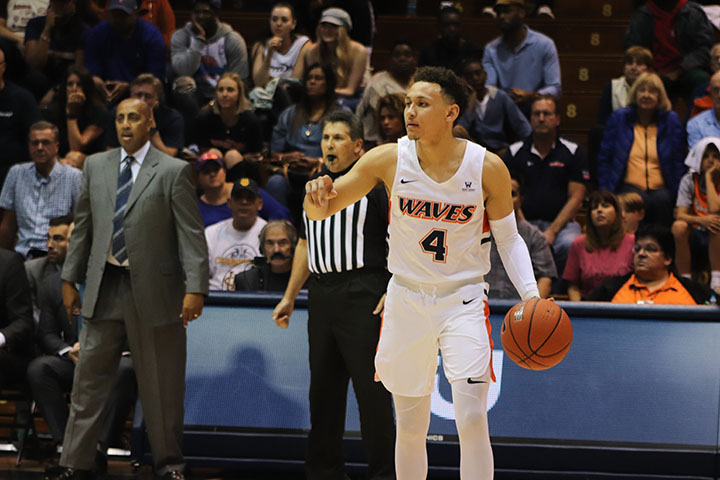 Ross directs the offense as Romar looks on.

“This is a good win for us, especially this early in the season,” Kessler said. “[After the loss to Cal], this is a good comeback for us.”

The Waves took the momentum from the home opener into Tuesday’s game at Cal State Northridge, where they blasted the Matadors 94-82 behind a combined 44 points and 20 boards from the Edwards brothers.

The road stretch will continue as the Waves, now 2-1, play 2019 NCAA Tournament team Abilene Christian in Texas on Saturday, Nov. 16 and then Pac-12 foe USC in Los Angeles on Tuesday, Nov. 19.