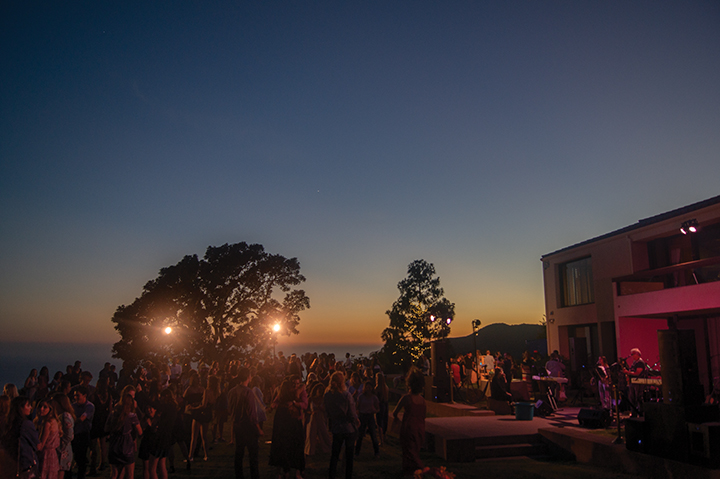 The class of 2019 kicked off their final year in style with Rock the Brock, Thursday, Aug. 30.

Seniors shuttled up to the Brock House for the annual senior year kick-off party hosted by President Andrew K. Benton. All students who attended the event were entered into a raffle pool for an assortment of prizes and signed a guitar that would be one of the grand prizes.

Trevor Sytsma said it was a night that brought his Pepperdine story full circle, “It brought back so much nostalgia from My Tie freshman year,” Sytsma said.

The night was reminiscent to of their first week on campus as freshmen attending My Tie, later renamed to the President’s Reception.

“Everyone who was a stranger then has become a familiar face now, and I love that AKB provides an experience for us that brings our Pepperdine journey full circle.”

As they began to arrive via shuttle, students greeted old friends, abroad housemates and new faces in anticipation for the event. The combination of business casual outfits mixed with the view of the ocean and Malibu served as a picturesque backdrop for group photos and selfies.

The party moved to Benton’s backyard and students snacked on mini appetizers as more of their classmates arrived. Most students caught up over about their summer breaks and first few days back in classes. There was no shortage of taking pictures as the sun set over the mountains, creating an atmosphere that needed no filter.

However, the night wasn’t all talk and photos. The Mesa Peak Band, led by Benton, started playing tunes, and it wasn’t long before students hit the dance floor. According to the band, the Class of 2019 was the fastest group to rush to the dance floor, “I think we broke the record for getting students on the dance floor,” they said. The melodies and nostalgic classics were infectious, and the dance floor was packed. Students had tambourines and maracas to play along as the band jammed out.

Between songs, the band announced the winners of the various raffle prizes. Lucky students walked away with individual loot like Apple EarPods, a GoPro, alumni apparel and more. While the smaller winnings were distributed throughout the night, all students kept their eyes on the grand prize: the Waves of Relief awards and the guitar signed by the class of 2019. Drew Fisher walked away with the big winnings of the $5,000 award, while Julia Howe and Elizabeth Hsueh claimed the $2,000 winnings. Cate Chapman was the lucky winner of the Class of 2019 guitar.

As the winners went off with their spoils, the party didn’t stop there. The band continued to perform hit songs like “Pretty Woman,” “The Middle,” “One Way or Another” and “Shake it Off.” Students showed off their dance moves and swung the night away. A conga line formed; students hopped on stage to sing and dance with the band.

Jessica Dimaano said the event was time well spent, “It was most excellent and very exciting, especially since it’s our and AKB’s last year,” Dimaano said. The event also prompted some forethought, “Seeing everyone is a reminder to make the most of this last year together.”

While the purpose of the event was to jumpstart the final year for the class of 2019, it was also a reminder of AKB’s last year as President. In the spring, Benton announced that he would be stepping down from his role at the end of this school year. The university has appointed a search committee to find a replacement for the following year.

With Benton transitioning out of his role, there are questions about the continuation of Pepperdine traditions. While the community anxiously waits for news regarding the Presidential search, there is uncertainty about the preservation of events like the Rock the Brock and the President’s Reception. “I hope this kind of event continues into the future but would love to see a new president who makes it distinctly his own, in the way AKB has fashioned Rock the Brock,” Trevor Sytsma said.

Despite the uncertainties regarding the future, Pepperdine seniors made the most of their time rocking out with AKB. Becky Want got up on stage with the band during one of their songs.

“I got up on stage to play tambourine with him, it was bittersweet,” Want said. Want said she felt a connection between the senior class and AKB, “He wants to make the most of this last year, so we have a mutual understanding about the last year great being great.”