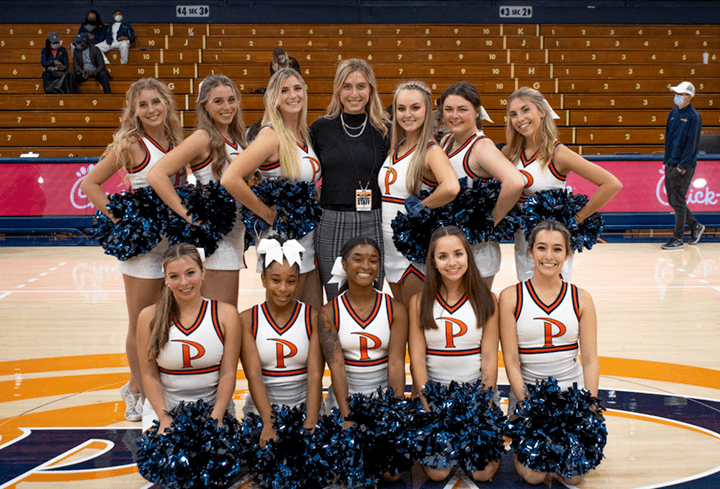 The 2021-2022 Pepperdine Cheer Squad gathers before cheering at their first game Nov. 5. Katie Garrison restarted the Cheer Squad as a junior with the intention of bringing more school spirit to campus. Photos by Brandon Rubsamen

Every home Men’s and Women’s Basketball game, there are two sports occurring — one on the court and the other on the sideline.

Pepperdine’s Cheer Squad restarted in 2018 due to the efforts of alumna and squad coach Kaitlyn Garrison (’20). Garrison said the team of 12 feels like family and their goal is to carry enthusiasm of the Cheer Squad from the court to campus.

“One of the big things this year that I really want to emphasize is being there for not just the students, but those that are passionate about Pepperdine and the community around us,” Garrison said. “So I’m hoping to expand that.”

The Evolution of the Cheer Squad

Garrison began brainstorming the idea of starting a new cheer squad — after the previous one ended in 2012 after the University replaced it with a dance squad — during her first year at Pepperdine, she said. Having been a cheerleader in high school, Garrison said she felt there was a lack of school spirit on campus that a cheer team could bring.

The following year, Garrison studied abroad in London, but said she used that time to prepare her plan. When she returned to the Malibu campus in fall 2018 as a junior, she landed a meeting with the Athletics department.

“I had pitched this concept — I don’t know how this happened — they were like, ‘OK.’ I did come in with a full presentation and budget sheets,” Garrison said. “I came in with everything ready.”

In October 2018, Garrison said the University gave her the go-ahead to start tryouts, but the Woolsey Fire sent everyone home shortly after. Still, Garrison said she was determined to get the squad up and running, so she held virtual practices.

“I did a full tryout and put together a really great squad, and they actually had to practice on Zoom and with videos over winter break,” Garrison said. “They practiced all through the winter and we showed up after winter break and had the first game.”

After graduating, Garrison transitioned her role from squad captain, student and coach to just coaching. She said this transition was smooth, and now she enjoys mentoring and watching the team grow.

“I’ve been blessed to be on the squad that I am now coaching, and one of the things I really valued was that family aspect,” Garrison said. “This is who you spend all your time with, so being able to get to meet everyone and put that community together was important to me.”

One of her favorite parts of coaching, Garrison said, is building relationships with her team.

“We do monthly meetings, just so I can check in with them, because I want to have that time to actually be with them to set goals,” Garrison said.

Being on the Squad

Junior Elizabeth McLaughlin said she met Garrison as a first-year student. McLaughlin had been cheering for 10 years before coming to Pepperdine, and once she got onto the Cheer Squad, she was grateful the community helped her transition to college life, she said.

“We want to support this school and are really passionate about staying involved in the sport,” McLaughlin said. “This is our last opportunity to cheer forever — there’s no career that supports cheerleading or represents cheerleading in the way that school and competition do.”

Senior Imani Barbary is the captain of the Cheer Squad and joined in 2018 — her first year — when Garrison was still in the building process.

The team is still new and each season has been interrupted so far, Barbary said. Now that the Cheer Squad is able to be on campus, Barbary said she hopes it will gain attention from students.

“I feel like if more people know about the team, more people would try out and be interested in going to basketball games,” Barbary said.

The 12 squad members practice tumbling and cheer routines for two hours twice a week at Firestone Fieldhouse and the on-campus fitness studio. McLaughlin said she hopes, as the squad becomes a more recognized part of Pepperdine’s campus, they can expand to stunting — which is when cheerleaders lift or throw one another as a team.

Right now, the team is only certified to tumble — meaning they can do flips, cartwheels and handsprings, Barbary said. Barbary recognizes the risk of stunting and thinks they should establish their skills throughout the year, she said.

“We’re newer and they want to make sure that our tumbling solidified,” Barbary said. “Stunting is very dangerous because when you start you don’t have a mat, you don’t put on any extra pads or anything, it’s just your body and the people that hold you on their body.”

Insurance is needed for cheerleaders to stunt because of the high rates of short and long-term injuries from stunting accidents, according to Geisinger. Studies on the Geiginger website show cheerleading is one of the most dangerous sports for women due to being thrown into the air unprotected.

Garrison plans on getting approval for the Cheer Squad to stunt soon, she said, but the team must demonstrate their full potential first.

During tryouts, Garrison said she looks for well-rounded individuals.

As captain, Barbary said she appreciates the various skills each team member brings to the table given their unique experiences. There are gymnasts, dancers, a color guard, trained cheerleaders and those with no history in any of these fields.

“Yes, we cheer now, but that doesn’t mean we’ve always been cheerleaders,” Barbary said. “I think that it’s cool that we are different.”

The Cheer Squad performs during media breaks and at halftime at every home Men’s and Women’s Basketball game throughout the season. There are upcoming home games Monday, Nov. 15 and Wednesday, Nov. 17 at 7 p.m., at Firestone Fieldhouse.