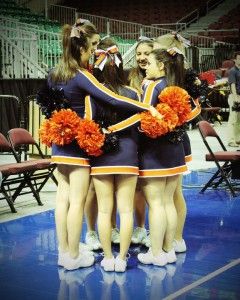 Last semester, the Waves’ cheer coach informed her cheerleaders that the Athletics administration would be ending the cheerleading program and moving in a more dance-focused pom and spirit squad. In a goodbye email to the seven cheerleaders, head coach Jennifer Kehoe introduced the new coach and choreographer, Alex Nicandros, and wrote that she and Athletics encouraged the cheerleaders to audition for the 2012-2013 season.

While most former cheerleaders are studying abroad, those remaining on campus will choose not to audition for the Pom Squad.

Any evidence of traditional cheerleading – stunts, tumbling and jumps – on Pepperdine Athletics’ website is left on the photo archive.

“We understand that this change may have been painful for some, and though we’re sorry for that, we do believe that in the end it will be beneficial to the greatest amount of students – those who choose to take part and those who will enjoy an enhanced game-day atmosphere,” Director of Athletic Communications Roger Horne wrote in an email.

The impression of the Pepperdine cheer team in the past has been a fickle one. Last year’s cheer captain, Karissa Vargas (‘12), described the trend for Pepperdine cheerleaders was to join as a freshman, study abroad and not come back. But she said that with Kehoe, both women were looking to build a solid cheer program for the 2012-2013 season and the future.

“I reached out to many high school programs in Southern California and visited their practices and cheer competitions, chatting with them about cheering in college, cheerleading at Pepperdine and how special a place Pepperdine is,” Kehoe wrote.

In addition to the local recruiting, Kehoe contacted high schools across the nation, keeping up with cheer competitions and creating a following for the program. In total, she had made contacts with over 100 cheerleaders interested in Pepperdine cheerleading.

“It was very hard for me to relay the news to them about the changes to the program,” Kehoe wrote. “Most who had applied to Pepperdine because they wanted to cheer for the program chose another school to attend.”

Today, Kehoe works as the athletic advancement assistant. The feedback she received from her cheerleaders, she wrote, is a mix of disappointment and sadness. The community was surprised by the change as well. She wrote that most thought “the athleticism and overall appeal” had increased in the last two years.

“We spent a whole year doing this and then they took away the program,” Vargas said. “It’s frustrating, and it’s hard because the fault isn’t against the Dance Team themselves, it’s more on the administrators.”

On the Athletics administration’s part, much energy has been put into better attendance and support for athletic teams in recent years. With Wave Zone, pre-game entertainment and this year’s Riptide rewards program, restructuring the primary spirit group is part of a larger effort to increase student involvement in Athletics.

According to Horne, the Dance Team performed occasionally at men’s basketball games in the past and quicker movements seemed to be well-received by the crowd.

“A group that is dance-focused will bring us much more in line with what other Southern California and WCC schools are doing, and we think will also serve the greater interests of Pepperdine students,” Horne wrote.

Athletics also noted the popularity of the annual Dance in Flight performances as an indication of student appeal.

“There has been a good amount of positive interest among returning, incoming and prospective Pepperdine students since the Pom Squad was launched and that gives confidence to the group’s leaders that the team will be a success,” Horne wrote.