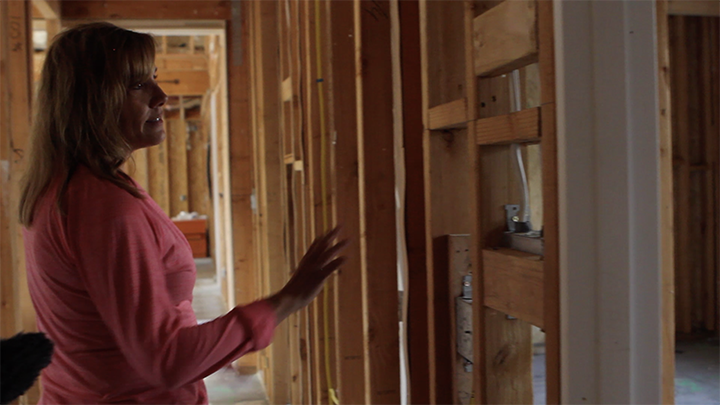 When the Woolsey Fire jumped the 101 freeway and headed toward Malibu the morning of Nov. 9, resident Laurie Brennan packed two suitcases, grabbed her two dogs and immediately left.

Ten hours later, she learned flames completely destroyed her house. The other homes around her all survived.

“I have four kids,” Brennan said. “All of their baby staff, all their memorabilia from grade school, all my family photos. I lost everything.” 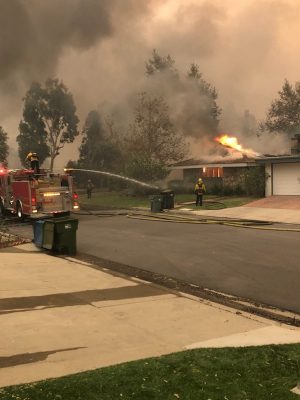 Brennan had moved to her home in Paseo Canyon in Malibu West just 10 months before Woolsey hit.

“I just didn’t think the fire was gonna come this far,” Brennan said.

Now, one year later, Brennan is on track to be the first resident to completely rebuild her home in Malibu.

The Woolsey Fire destroyed 488 homes in the city last year. As residents heal and city leaders push recovery, rebuilding efforts have been a difficult and time-consuming process.

“This is generally a group of people that have never built a home before, didn’t plan on building a home,” Malibu Mayor Pro Tem Mikke Pierson said. “Even if you want to build a home and you embrace it, you’re exhausted by the end of it, and it’s really, really difficult.”

According to the city’s rebuilding statistics, no homes have been completely rebuilt. The city’s Planning Committee has approved 169 projects and has issued 31 building permits for property owners to start construction.

City leaders struck a deal with the California Coastal Commission in March to help residents quickly get building permits.

“To take a two to four year process of getting a permit to start building down to less than six months is huge progress,” Pierson said.

The first step in the rebuilding process requires property owners to clear debris and contaminated material from burned structures.

Brennan did not get her property cleared until January.

“That was probably the hardest part of the whole process — … waiting for that,” Brennan said. “If it wasn’t raining, I was over here almost every weekend trying to salvage. I’d get my hazmat suit on and pick through ashes trying to find stuff.” 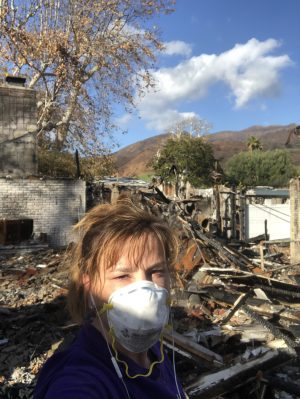 Photo courtesy of Laurie Brennan | Brennan at the site of her home that was burned in the Woolsey Fire.

After debris removal, residents can then start meeting with city officials, architects, contractors and designers to prepare rebuilding plans.

“Because every home is different, not everyone runs into the same situations at all,” Pierson said. “Different kinds of houses, different parts of Malibu, different landscape, different geography, it goes on and on.”

Brennan said she submitted her rebuilding plans Dec. 26, 2018, and was the first person in Malibu to do so. Her plans were approved in March, and she was finally issued a building permit in June.

“Think about it … it’s been five months and I almost have my house built,” Brennan said. “It took seven months just to get the permit to do it.” 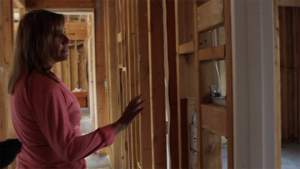 Photo by Kaelin Mendez | Brennan inside the construction site of her new home in Malibu West.

As someone who has never built a home, Brennan hired an expediter to help her with the process. For Brennan, rebuilding quickly is a priority.

“I only have one year’s worth of rent money from my insurance company,” Brennan said. “So if I didn’t get the expediter moving quickly and everything, then I was gonna run out of rent.”

However, city leaders said most property owners who lost homes in 2018 are not acting with the same urgency.

“On my street, the two houses that burned to the ground, one is being framed as we speak and they’re moving very quickly and the other one hasn’t begun any work yet,” Malibu Mayor Karen Farrer said.

“I would say those two houses on my street that are practically right across the street from each other represent the complete spectrum of what’s happening right now,” Farrer said.

Farrer and Pierson both agreed the city’s rebuilding progress depends primarily on how fast property owners decide to take action.

“Other people sit at home and we’re trying to find them and we’re doing a pretty good job, but they’re sort of waiting for someone to contact them,” Pierson said. “And that’s not the process of building a home. You gotta be really, really proactive and really detailed oriented. It’s a whole full time job.”

Pierson said he believes as many as 30% of property owners who lost their homes will not rebuild.

“There’s easy ones to see: older [homeowners],” Pierson said. “You’ve been in Malibu a long time, you’re under insured, you’re probably not rebuilding.”

Pierson and Farrer were both elected to the council two days before Woolsey burned through Malibu. They are co-chairs of the Disaster Response and Recovery Ad Hoc Committee, which works to help the city better prepare for future disasters.

Pierson and Farrer said they want Malibu residents to know that city staff is working hard to support residents as they rebuild their lives.

“I think we’ve never undertaken a rebuilding like this, so there was a learning curve and what that looked like and how to get it going,” Pierson said.

As city leaders, they said the most uplifting part of this past year has been the community’s resilient spirit.

“We’ve both been through many fires,” Farrer said. “Most people are here to stay. They’re here to help each other. We have a lot of just people who are good neighbors.”

One year has not been nearly enough time for Malibu to recover from Woolsey’s destruction.

“[Full recovery] won’t be before three years,” Pierson said. “That’ll probably be about the time when we’re mostly complete.”

For those who lost everything, this last year has been filled with tremendous devastation and grief.

“It’s probably been the most emotional year of my life,” Brennan said.

“The things that I saved that I did pack in my suitcase, I did not unpack until April,” she said. “It took me a good six months just to be able to feel comfortable enough to take out what photos I had saved of my parents and things like that.” 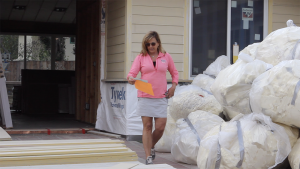 Photo by Kaelin Mendez | Brennan outside the construction site of her new home in Malibu West.

Nonetheless, Brennan said she is looking to the future with hope and gratitude for the people whom she has met during her rebuilding progress.

“I can’t stress enough this community here is amazing,” Brennan said. “I have amazing stories of workers — these guys I’ve never met in my life — they’re framing my house and they’re working hard and they’re like, ‘we are so honored build your house for you.’”

Brennan said she has been renting her neighbor’s house that is right next to hers for the last year.

She expects to move into her new home in January.

“Now comes the fun part, watching the floors go in and the cabinets go in,” Brennan said. “I’m really excited about that. This is where I belong.”