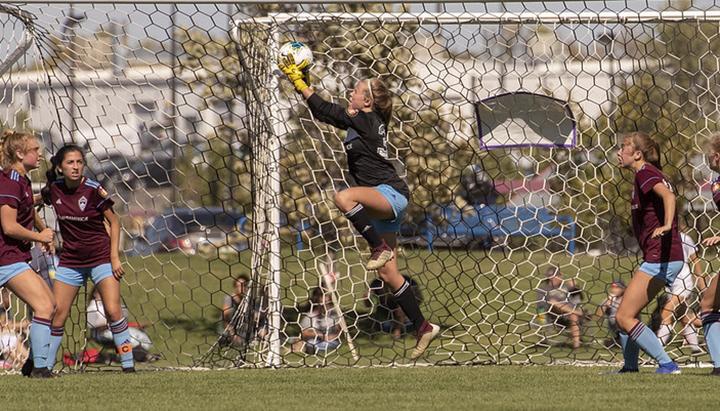 Freshman goalkeeper Ellie Sommers (center) makes a save during a club match in high school. Due to the pandemic postponing high school and college seasons, Sommers has not played in a match since December 2019. Photo courtesy of Ellie Sommers

Each fall, new students descend into Malibu and prepare to begin their college experience. Among them are student-athletes, who have to balance their classwork with the physical responsibility of a competitive team sport and the mental pressure of contributing to their athletic programs.

Ordinarily, during this time of year, freshmen student-athletes would be settling into campus and meeting the people with whom they will spend the majority of their time for the next four years.

This year, however, is different. On July 22, Pepperdine announced a transition to online learning for the fall 2020 semester, closing its campus, housing and facilities due to the COVID-19 pandemic. On Aug. 13, the West Coast Conference (WCC), which includes Pepperdine, postponed all fall sports competitions for the same reason.

While some first-year students are in Malibu, others are spread out in their homes around the country and even around the world. Some have had the opportunity to meet their teammates in-person, and others have had to rely on Zoom. Since what it means to be a freshman student-athlete has changed drastically this year, the Graphic spoke with a few incoming athletes to discuss how their Pepperdine experience has been so far. 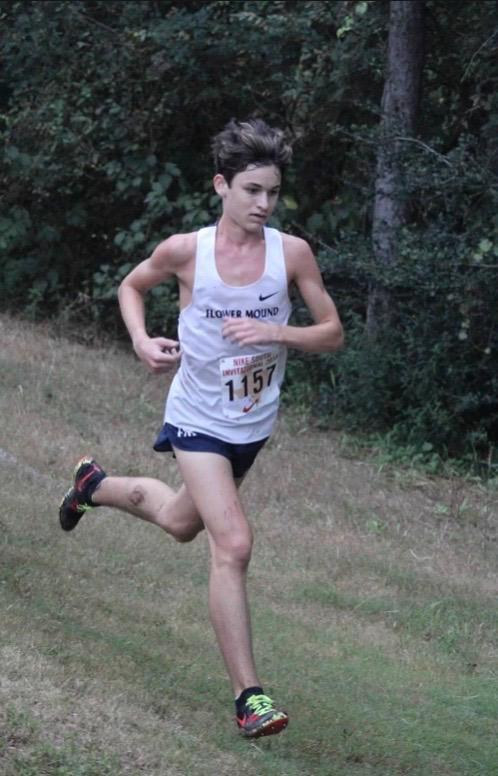 Johnathan Flint is one of several new recruits to a cross country program looking to build on last year’s best-ever 13th place finish at the NCAA West Regional. The Flower Mound, Texas native was a four-year varsity runner and put together an accomplished career, including an All-District First Team selection and a team appearance at Nike Cross Nationals, which only around 25 high school cross country teams in the nation qualify for.

Due to a hardship exception waiver, Flint is one of approximately 150 students — at least a third of which are athletes — living on campus. Flint said Pepperdine enforces social distancing and mask-wearing and discourages people from visiting other rooms. While campus remains closed to the public and to most students, Flint said those with the waiver to live on campus can come and go as they please.

“You’re allowed to leave campus, and pretty much everything you do off campus is out of [Pepperdine’s] jurisdiction,” Flint said. “But, obviously, I try not to be an idiot. I stay safe and try not to interact with people too closely.”

There are lengthy screening protocols regardless of whether students venture off campus. Flint said students are screened for symptoms at the gate, and he is required to send in a screening form to the Sports Medicine department every morning.

When Flint does leave campus, it’s usually to go on a run or hang out with his teammates. Before coming to Malibu, Flint worked out with teammate Jackson Felkins, who lives near Flint in Texas. Now that he is in the Malibu area, Flint said he is reaping the benefits of being near most of his teammates.

“I definitely feel like I’m a part of the team still,” Flint said. “I feel connected to the other athletes here because I can run with them.”

Despite having to learn remotely and live under strict guidelines, Flint said he is excited to be at Pepperdine.

“It’s not quite the same thing I expected, but it’s a really good experience,” Flint said. “I still feel like with my online classes I’m able to learn from them. […] It could be a lot worse.”

As a runner, Flint said he doesn’t face the same disadvantage as other athletes who need people around them to practice or play their sport.

“I still feel like I’m able to train just like I would,” Flint said. “Obviously, I don’t have a season, but It’s a lot easier to piece together a mock race than it is to play against another team.”

In spite of the unexpected challenges, Flint said he believes he has been able to keep his focus.

“I was fairly certain our season would be somewhat unlikely,” Flint said. “But even during the times I thought we might have a season, I think I’ve been able to keep the same mindset because every day is an opportunity to get better and to improve.” 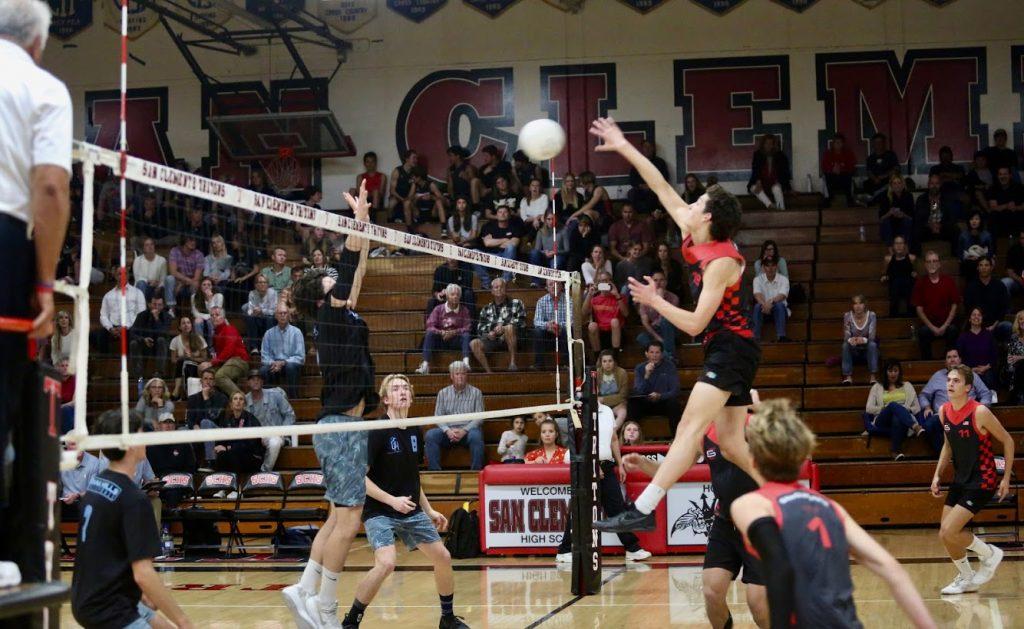 Freshman opposite Eli Crane spikes the ball during a high school match. Crane has been separated from his fellow freshmen teammates, as he lives in “The Stinkies” apartments, but is not allowed to go on campus. Photo courtesy of Eli Crane

Freshman opposite Eli Crane is part of a seven-man recruiting class for the Men’s Volleyball team, which was ranked No. 8 nationally when the spring 2020 season halted in March. Crane played volleyball at San Clemente (CA) High School, which was ranked sixth in the country during his junior year.

Crane is living with his brother, Bryce — a junior — in the Malibu Canyon Village apartments, commonly known to students as “The Stinkies.” Crane was initially supposed to live on campus with the rest of his freshmen teammates but gave up his spot when space became tight.

“In order to be on campus, you had to make a sob story,” Crane said. “I had somewhere to live. […] Housing was excited to have another room open, so they said. ‘Yeah, please stay at your brother’s.'”

Because he is living off campus, Crane said he isn’t allowed to go on campus to see his teammates.

“They won’t let me in,” Crane said. “It’s funny, because I have to wait by the gate. They won’t even let me behind the gate to wait for [my teammates].”

Despite his brother attending the University, Crane said he initially did not consider attending Pepperdine; he changed his mind, however, when it was the only school to offer him a volleyball scholarship. Now that he’s been participating in team Zooms since July, Crane said he has nothing but praise for his new teammates.

“I think we’re probably the tightest volleyball team that I know,” Crane said, adding that he sees his teammates a couple times per day.

Crane said he was disappointed to not be able to live on campus because had looked forward to dorm life and social life. He is, however, aware that the adversity he is facing this year puts him ahead of his peers.

“I think I got more of a grown-up picture of college when I moved into this apartment because usually freshmen don’t live off campus,” Crane said. “I’m living off campus, getting my own groceries — all the stuff like that. So, I probably have a more sped-up version of college, but I’m loving it so far.” 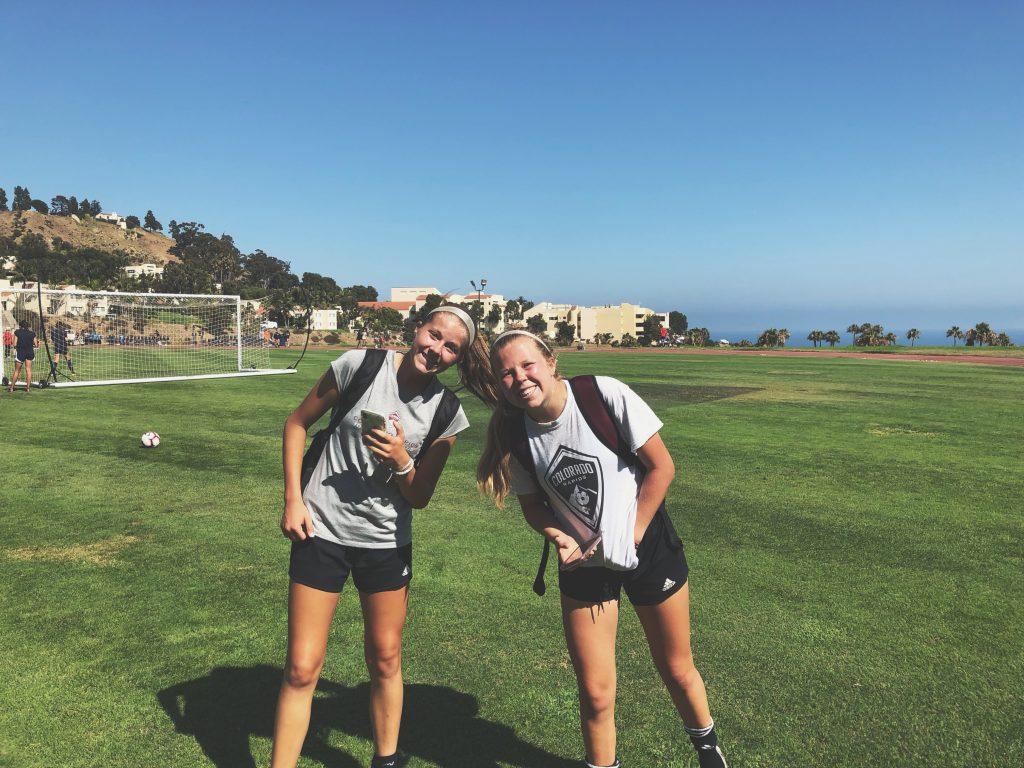 Freshman goalkeeper Ellie Sommers (right) poses with a fellow recruit during a visit to Pepperdine. Sommers has not been able to return to campus since committing and remains home in Colorado. Photo courtesy of Ellie Sommers

Ellie Sommers is a new addition to the Women’s Soccer team, which will hopefully return to the NCAA Tournament. One of two freshmen goalkeepers, Sommers fills a positional need for the Waves, who were so ravaged by injuries at the keeper position last year that forward Devyn Gilfoy played in goal for two games — including the final 94 minutes of Pepperdine’s NCAA Tournament first-round loss to Texas Tech.

With no definite start date for the season, however, Sommers remains at home in Westminster, Colo. Despite being scattered around the country, Sommers credited the coaching staff with doing its best to bring everyone together.

“The coaches are doing a really good job introducing us to the team and making us feel included,” Sommers said.

Sommers, however, admitted it is still a challenge connecting with her teammates, most of whom she has only met in person on her official visit back in high school.

“Not that we’re not a part of the team yet, but it feels like we’re almost there,” Sommers said. “We’re not quite there yet, just because we can’t have those face-to-face interactions with everybody.”

As an athlete who has consistently played year-round due to club and high school commitments, Sommers said she is also feeling the effects of her longest competitive layoff in some time.

“I haven’t played a real game since late November or December of last year, because that’s when our club season ended,” Sommers said. “And then in high school, the day of our first high school game was the day that all schools shut down. So we were actually on the bus getting ready to go and they turned us around.”

While it has been a long time since Sommers has experienced game action, she said the position that she plays gives her an advantage over outfield players in staying game-ready while isolated.

“Since I do play goalkeeper, I have the ability to train more specifically,” Sommers said. “My teammates learn a lot by playing in groups and in actual games, but I can just take a lot of shots in a practice.”

Although Sommers said the pandemic has derailed the start of her academic and athletic journeys, she said she is still mindful that a lot of people have been affected in more serious ways.

“My heart goes out to all the seniors this year that haven’t been able to train and get that senior year that they wanted,” Sommers said. “They are in my prayers for sure.”

Despite a spring and fall that have “tested her patience,” Sommers said she has been talking with teammates about trying to maintain positive mindset and awaiting the season when it happens. 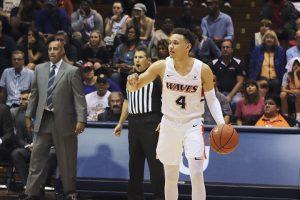