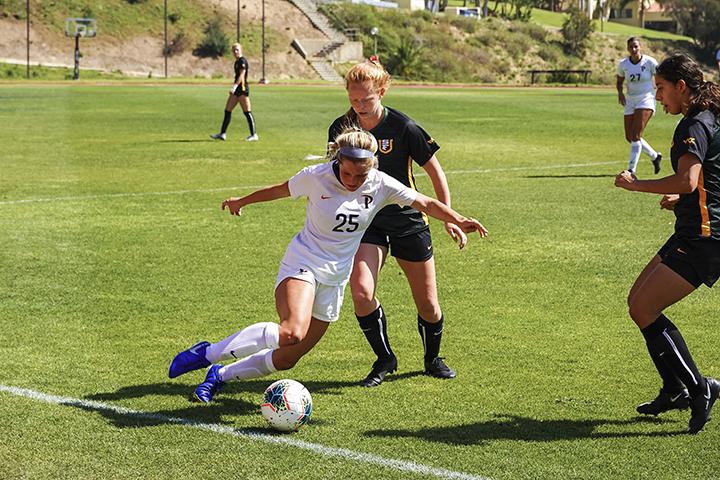 Sophomore forward Shelby Little (No. 25) dribbles against two University of San Francisco defenders during the game Saturday, March 6. USF’s defense was staunch at first, but the Waves broke through to take a 1-0 victory.

Pepperdine Women’s Soccer got all they could handle from the University of San Francisco, who forced Pepperdine to play a direct, physical game and went chance for chance with the Waves for much of the contest.

In the end, Pepperdine had the only two All-WCC players on the pitch, and that made the difference.

Senior forward Joelle Anderson, a 2019 first team all-conference selection and recent NWSL draftee, got on the other end of a pinpoint through ball from sophomore defender and fellow first-teamer Trinity Watson and buried a shot into the bottom left corner in the 69th minute. Pepperdine’s defense held for its second clean sheet in as many WCC matches, and the Waves came away with a 1-0 victory in Malibu on March 6. The win moves Pepperdine to 3-2, with a 2-0 conference record.

“I’m really happy with how we’re starting, just coming right out of the gate with two wins and two shutouts,” Anderson said. “I think we’re off to a really good start.”

Saturday’s win was not assured early in the game. San Francisco, who finished sixth in the WCC last season, forced Pepperdine to play a physical game, and the Waves struggled to build offensive momentum and retain possession.

Senior forward Calista Reyes (No. 10) makes a run down the right hand side of the pitch against San Francisco. The Waves attempted to play over the top early in the match, but found more success sending through balls on the ground.

“I thought we kind of played into their hands,” Head Coach Tim Ward said. “I can’t remember a team that was that tall and physical. They were tough and organized and hard to break down.”

That toughness manifested itself in the ninth minute, when Dons midfielder Ashley Humphrey and Waves senior forward Devyn Gilfoy clashed heads. Both players left the game and did not return.

San Francisco forward Kalena Teufel had the best chance in the early going, cutting inside from the left wing in the 13th minute and sending a shot just wide of goal.

Center backs Kenna Roth and Catherine Hill had an excellent day for the Dons, dominating in the air and shutting down Pepperdine’s attempts to go over the top.

“I think for us, it’s important to maintain our composure, keep the ball on the ground, and move it fast,” Anderson said. “It’s definitely a challenge, but I mean, it’s WCC soccer, and we’re going to see that every game, that grind.”

At the half, Pepperdine had four shots to the Dons’ three, but neither team managed a shot on goal. Although San Francisco’s energy seemed to overwhelm the Waves at times in the first half, Ward said he believed his team would be in a good position after the break.

“The good news about collegiate soccer is in the second half, the game usually opens up. It’s really hard to maintain those levels of intensity for 90 minutes,” Ward said. “We started really brightly in the second half, we put the ball on the ground rather than in the air, started knocking it a little bit, and our tempo was really good.”

Pepperdine started to find some cracks in the Dons armor as the second half got underway. In the 56th minute, Anderson controlled the ball with an excellent first touch and released freshman Tori Waldeck down the left side. Waldeck got the ball to freshman Skylar Enge, who shot from the top of the penalty area and forced Dons goalkeeper Molly Eby into her first save.

A wild scramble in front of the Dons’ net in the 60th minute saw multiple USF defenders throw themselves in front of Pepperdine shots to prevent Eby from needing to make a save, and Enge and Anderson put additional shots on target in the 62nd minute.

The breakthrough seemed inevitable, and it finally came in the 69th minute. After making a defensive interception, Watson found herself in space and advanced the ball past midfield.

“I thought ‘You know what, I’m just gonna go for it,'” Watson said. “Nothing bad can come from going forward. I look up, I dribble a little bit, and I see Joelle making a really good run through.”

Watson’s pass hit Anderson in stride, and the midfielder was able to slide the ball past Eby with her first touch. It was Anderson’s first goal of the season and the 22nd of her career.

Although Pepperdine got the goal, San Francisco had more counter punches left in them. Clevely needed to save a fluttering shot by Maria Marlow in the 71st minute. A minute later, Kaylin Lunsford‘s shot sailed past Clevely but hit the crossbar and bounced out.

Despite the brief scare, the Waves defense kept the ball out of the net the rest of the way and have yet to concede in WCC play. For her part in keeping the shutout and assisting the game-winning goal, Watson earned the WCC Defensive Player of the Week award, becoming the second consecutive Wave to win after Clevely took it home the week prior.

Still, Ward said the positive display from San Francisco shows the overall strength of the WCC that the Waves will have to contend with all spring.

“Our conference, I would argue, has got to be in the top five conferences in the country,” Ward said. “So everybody in our conference is good. Traditionally, ourselves, BYU and Santa Clara have been representing [the WCC] in the postseason, but we’re a conference that I think soon will become a four, potentially a five-bid NCAA tournament conference.”

The Waves will travel to Stockton, Calif., on Saturday, March 13 to play Pacific. Although the Tigers finished last season 0-9 in the WCC, they have a first-year head coach in Ed Moore who hopes to revitalize the program.

“We will not be underestimating them at all,” Ward said.