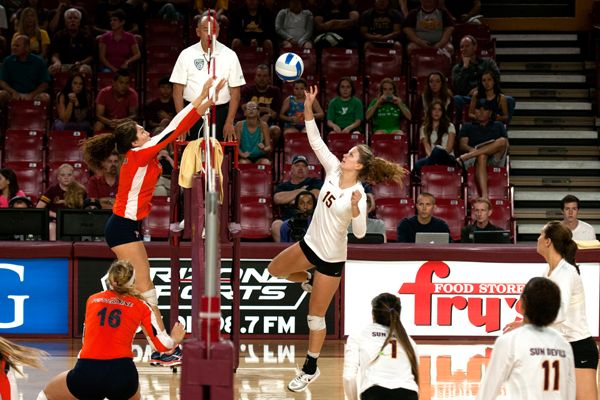 Photo Courtesy of Mario Mendez and The State Press

After dropping a pair of matches to two top-25 ranked opponents in Arizona Saturday, women’s volleyball (5-7) prepares to begin WCC play with a road trip up north to face Saint Mary’s Sept. 26 at 7 p.m. and Pacific on Sept. 27 at noon. From Sept. 19-20, the Waves took part in the Residence Inn Invitational in Tempe, Arizona. The squad swept winless North Carolina Central in the first match Friday. The next day the Waves were shutout by the heavyweights, No. 8 Colorado State and No. 18 Arizona State.

Despite the sweeps, senior Samantha Cash said she left the tournament confident to enter conference play. A glance at the stats sheet reveals that in the past two sets against CSU and in all three sets against ASU, the team held tight, losing by no more than five points per set.

“We played really well … We realize we are in contention with the big name schools,” Cash said.

Bergeson notched her seventh double-double of the season versus CSU. She said competing with the bigger name schools is an exciting experience to have as a player, but she looks forward to erasing the pre-season and stepping into the WCC schedule.

Bergeson said this season they’re vying for an NCAA tournament bid alongside a WCC championship.

As with any team jumping into a fresh season, the Waves are upbeat, yet one major team dynamic change should be noted. For more than three decades, Nina Matthies occupied the indoor women’s volleyball head coaching spot. Last year she retired. She remains coach of the two-time AVCA championship-winning sand volleyball team.

Bergeson spent one year under Matthies and is now entering this season under Tanner. She said their coaching styles are noticeably different, mainly because Matthies spent such a significant amount of time specifically with collegiate women’s volleyball, while Tanner is still adjusting.

Cash said, “Change is always difficult,” but that she looks forward to seeing Tanner grow the program. 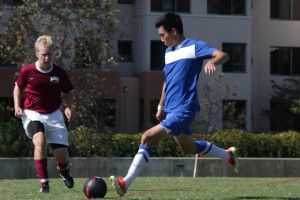 Photo Courtesy of Andres RodriguezMen’s club soccer kicked off its season this weekend at Loyola Marymount University,...
Copyright 2018 Pepperdine Graphic
Back to top