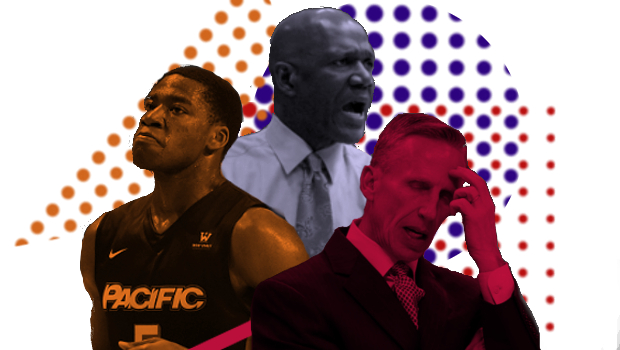 The West Coast Conference is the land of the haves and the have-nots. Last season, the WCC led all conferences in blowout games; 29 of the 90 conference games had margins of victory of at least 19 points, according to KenPom’s metrics.

Judging by the title, these three teams are the have-nots.

Hate to be the bearer of bad news, but the teams mentioned in this article will not be good this season. In fact, they will probably be quite bad.

The offseason has been tumultuous for the three teams in the first tier of the Graphic’s West Coast Conference Power Rankings. In a league that values roster continuity, player development and a deep crop of talented upperclassmen, these programs will fight an uphill battle for relevancy in the immediate future.

But these programs aren’t hopeless. Despite losing plenty of graduating seniors and key contributors to the transfer market, the WCC’s cellar-dwellers will bring in deep freshman classes, promising transfers and a few former power-five prospects.

Will these new faces be enough to bring their programs out of the WCC’s bottom tier? Only time will tell. For now, however, here is how the bottom third of the WCC will shake out:

Two months after upsetting San Diego in the first round of the West Coast Conference Tournament, Portland’s leading scorer — and onetime Graphic WCC Players to Watch candidate — Jazz Johnson transferred to Nevada. Shortly after his decision, Johnson threw his old team under the bus in an interview with the Reno Gazette-Journal, published May 3:

[Nevada’s program] is a night and day difference,” Johnson said, “Portland has been struggling for the last few years with being successful. [Portland’s] fan base isn’t very high. With Nevada, it’s a community thing. There’s no professional teams. They’re basically the show of the town and the town really supports them. That’s what I love about it.

To be fair, Portland has been struggling with attendance over the past few years. But still: Ouch.

But Portland’s offseason wasn’t all doom-and-gloom. Former UCSB commit Marcus Shaver flipped to Portland, rounding out what could be the Pilots’ best recruiting class in school history. The three-star guard was a late bloomer in the Arizona ranks, and was one of the best high school prospects available in the offseason.

But to lose six players to the transfer market — not to mention three seniors to graduation — in one season? The lack of continuity could be crippling for such a young, inexperienced team. Yet the Pilots weren’t the worst victims of extreme roster turnover; that honor goes to the next team on the power rankings.

Best case scenario: Portland’s young freshmen gel with the junior college transfers, taking the first steps to create a culture of guys who want to pull Portland out of the bottom of the WCC. Marcus Shaver plays like the guy who turned heads in high school, and becomes one of the WCC’s premier young guards.

Worst-case scenario: Portland’s roster of freshmen and transfers struggles to find consistency. The Pilots’ win total is in the single digits, and more players transfer out of the program.

Stat of note: Last season, the Pilots lost 16 straight games in conference play. This ignominious feat hasn’t been achieved since the 2000-01 Saint Mary’s squad lost all 14 of its WCC games — and that was back when the conference had eight members.

Stat of note: Ten players on the current roster have yet to log one minute in a Pilots uniform.

Although Pacific lost a whopping 13 players from last season, the few players who did stay were better than Portland’s holdovers from last year.

Not only are Pacific’s newcomers better one-on-one players than most (if not all) of the players on Portland’s roster, they also have Division I experience. For this reason, Pacific and its group of newcomers get the nod.

Saint Louis transfer Miles Reynolds was the fourth-leading scorer on a crowded Billikens’ roster. Oregon transfer Kendall Small has already garnered high praise from Head Coach Damon Stoudamire, who said this about the guard in the offseason:

Stoudamire believes Small could be the best point guard in the West Coast Conference next season for his ability to penetrate the defense and get to the basket. Small said he’s working this summer on his outside shooting and leadership skills, as he knows he will be the Tigers’ floor general.

In a conference with Emmett Naar, Josh Perkins, T.J. Haws, Charles Minlend, Amadi Udenyi, K.J. Feagin and (exhales) a watershed of backcourt talent, Stoudamire’s claim that Small is one of the best in the West Coast Conference is rather bold.

Yet at the same time, Small is capable of proving his coach right. The onetime ESPN four-star recruit fielded high-major offers because of his aggressiveness on defense and his smart point guard play. Small is an old-school point guard who distributes first, scores second and is averse to taking the outside shot, according to his Draft Express profile.

Despite being under-the-radar additions to the roster, Small’s fellow newcomers also have an intriguing ceiling. Transfer forward Jahlil Tripp averaged 11.4 points per game while connecting on 18 of his 54 three-point attempts on a loaded South Plains roster, according to his NJCAA.com page. Portland State graduate transfer Namdi Okonkwo is one of six players listed at seven feet or taller in the WCC. His size and interior presence will help the Tigers shift Graphic All-Upside Team member Anthony Townes to his natural position at small forward, as opposed to using him as a power forward or an undersized center.

Best case scenario: Pacific’s newcomers shock the conference, and the Tigers play spoiler to some of the middling teams in the conference. Anthony Townes blossoms in his junior campaign and is the first Tiger to earn all-WCC first team distinction.

Worst-case scenario: Losing senior T.J. Wallace and the junior tandem of Ray Bowles and D.J. Ursery is a critical blow to Pacific’s already-anemic offense. Worse still, Wallace and Bowles end up being more irreplaceable on the other end of the floor, as losing this tandem of guards causes the Tigers’ three-point defense to regress. For a team reluctant at shooting the outside shot, this spells another rough season in Stockton.

The Lions were first in the WCC in turnover, block and steal percentage; however, the players responsible for this chaotic defense have graduated. LMU’s main challenge will be finding players able to step up on defense in order to keep games remotely competitive.

Replacing seniors Brandon Brown, Buay Tach and Stefan Jovanovic was always going to be tall task for Head Coach Mike Dunlap in his fourth year. But — stop me if this sounds familiar — a handful of would-be key players transferred in the offseason. LMU not only had to replace a five-man senior class, but also the four underclassmen they lost to the transfer market.

The departure of high-major prospect Trevor Manuel might’ve been the straw that broke the camel’s back, as Dunlap tweeted this shortly after his announcement:

Can I TRUST you to do THE job, finish what you start, be there when crappy, & support me after I have been wrong: trust a monster topic.

The Lions, yet again, will face an uphill battle in 2017-18. But this is nothing new for LMU. Last season, eleven of LMU’s 30 games were decided by three points or less. For the record, the Lions went 6-5 in those games; however, one can only imagine how much different this year’s season outlook would have been if the Lions caught a break in a few of those nail-biters.

Here’s to hoping Dunlap and company turn things around this season. The WCC’s middle tier is far more interesting with two L.A. rivals in the mix.

Worst-case scenario: The head honchos up in Gersten Pavilion looks for someone else to save Loyola Marymount basketball.

The middle tier of the WCC power rankings can be found here.