Waves Set Up to Score Big 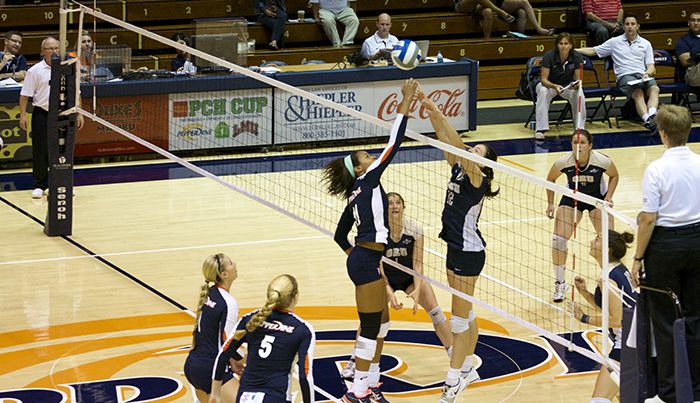 The 2014 season looks bright with setter Strehlow and hitter Cash stepping up to the line. The Waves finished the Asics Classic last weekend in second place behind Nevada, starting the season out with a 2-1 record.

Troy Tanner returned as head coach in December 2013 after a history of volleyball honors including three-time Pepperdine All-American, an NCAA Championship and an Olympic gold medal. Tanner was pleased with the promising performance of the girls over the weekend.

“The Asics Classic was a great beginning,” he said. “We learned a lot about ourselves (both individually and as a whole) and are addressing in practice, with specific drills, a few weaknesses while also reinforcing and upgrading our strengths — a lot of thought goes into planning practice.”

Strehlow’s performance earned her a spot on the All-Tournament Team, after accomplishing a triple-double with 20.7 kills, 5.68 sets and 3.08 digs in a triumph over Nevada before the Waves lost a three-way tie-breaker to the Wolves. Cash led the team in defense, accounting for four blocks and 11 roofs over the course of the tournament. Tanner commented on the potential and leadership the upperclassmen bring to a talented, yet young team.

“Both Becca and Sam are high IQ, skilled players that are very enjoyable to work with,” he said. “We’ve implemented some new movement patterns and systems to the team, and they’ve both responded well. It’s not easy for successful athletes to make changes to their game, but again, they’ve been very responsive in the gym.”

Strehlow came to the Waves after playing indoor for UCLA in 2012 on the Bruin’s first sand volleyball squad in 2013. Once with the Waves, Strehlow was an instant contributor, credited with 933 assists, 254 digs and 82 blocks in her first season. Tanner said he sees Strehlow’s star quality in her comprehensive contributions to the team when she’s on the court.

“Becca is a big-time player that really understands the game and loves to compete,” he said. “She’s our setter, of course, but we rely on her for much more than just setting. She hits, blocks, digs and serves for points — she is our leader.”

While high statistics and impressive titles follow Strehlow, the love of the sport began at home with her parents.

“What got me started in volleyball was watching my parents play down at our local beach,” she said. “I started playing there when I was younger and just messing around. It wasn’t until I was 10 when I started playing club volleyball. I guess I really just wanted to follow in the footsteps of both my mom and my dad.” 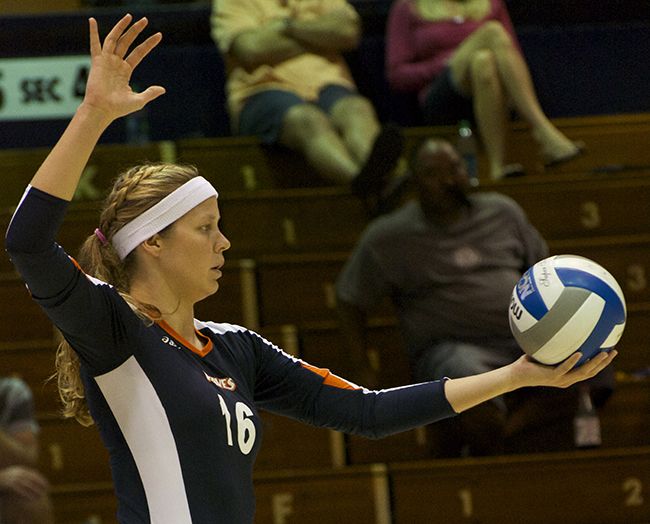 SERVE UP // Senior Samantha Cash serves during the Asics Classic in Malibu on Aug. 30. Cash totals 330 blocks as a Wave, ranking 10th in program history.

Strehlow’s premier season in sand volleyball with the Waves included an overall 23-7 record with senior Lara Dykstra. She produced a 3-0 winning record during the team segment of the national championships. Many top competitors and teams such as USC and North Florida fell to Strehlow’s powerful sand performances. Sand volleyball puts a lot of pressure on the individual nature of this two-team sport. Strehlow’s mindset certainly testifies to her leadership and team-oriented nature.

“My strengths that I hope to bring to this team are my leadership and the passion that I have towards this sport,” Strehlow said. “My strengths can only help this team so much, but it is this team that makes me want to get better so I don’t let them down. Each player has their strengths and weaknesses and I hope to only improve in my weak areas.”

The transition back to indoor from sand challenged Strehlow. However, her outstanding start to the season promises great season payoff after her intense spring and summer training.

“I am looking forward to seeing how far this team will grow and develop,” she said. “This is a young squad, and it is nice to see amazing talent come into a great program like Pepperdine. Tanner and the rest of the coaching staff are doing a great job at pushing each athlete to their full potential. I am just excited to play on the court with this awesome group of girls.”

One of those girls, Cash, is entering her final season as a lead hitter for the Waves. A member of the 2014 AVCA Collegiate Sand Volleyball national championship-winning squad and 2013 All-West Coast Conference first-team selection, Cash is yet another force to be reckoned with for any opponents of the Waves. When asked about Cash’s assets, Tanner said she brings the whole package.

“Sami Cash is wonderful girl and great middle blocker,” he said. “She is such a good example to the other girls on how to play the game, compete and be a teammate. She is fast, strong, hits a variety of sets with range, blocks, serves for points, intimidates opponents … What more can I ask of a player? She’ll have a huge impact on the outcome of our matches.”

Some achievements Cash considers her greatest include captaining the youth Olympic indoor team to a silver medal and making it to the Sweet Sixteen her freshman year with the Waves. This year, Cash’s eyes are set on a WCC Championship. The pressure that comes with such high achievement has never ruined Cash’s pure love for the sport.

“I really think I was always meant to play volleyball,” she said. “People are always throwing around the word sacrifice, but I look back on the missed parties, sleepovers, camping trips and I don’t feel sad. Playing volleyball was and is my favorite thing, so the extra practices I would go to were more of a gift than a job.”

The top Waves on the beach are bringing momentum onto the hardwood this season. With a high-paced understanding of the game and the extensive experience of these two upper classmen, the women’s volleyball team is sure to do damage on the court. The stars seem aligned as a strong lineup boasts talent and passion and the expertise of a professional-gone-collegiate coach’s tutelage.

Be sure to catch the Waves as they battle Utah State on Sept. 5 and Idaho on Sept. 6.

Soul Surfers Take to the Waves 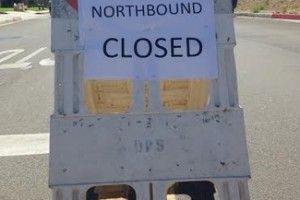 Photo by Whitney Irick PCH was closed in both directions between John Tyler Drive and Latigo Canyon on Saturday, Sept....
Copyright 2013 Jupiter Premium Magazine Theme
Back to top