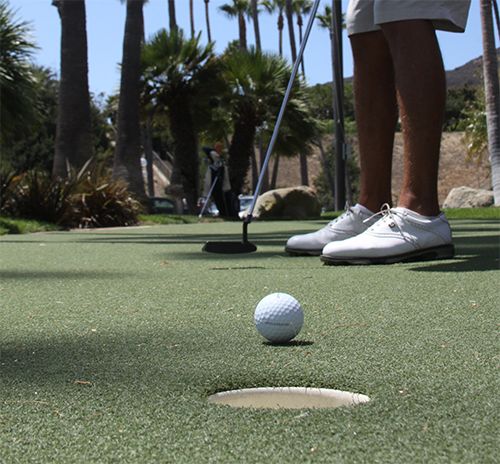 Juniors Fred Wedel and Marissa Chow are established in the golf community as two of the top-ranked collegiate athletes in the nation. Both come from different backgrounds, yet share a love of the game seeded as deep as family roots.

Golf is often seen as an individual sport, a challenge between the course and the golfer. However, juniors Fred Wedel and Marissa Chow competed with family, friends and a community united behind a common goal in the U.S. Amateur Championships.

Wedel and Chow are some of the top collegiate golfers in the game. Wedel finished 13th in the WCC, while Chow tied for second. Both are returning to compete for the Waves and hope to continue a program that is full of prestigious titles and professional names.

Although the two talented outliers are stark contrasts in many other lights. Wedel hails from Alaska, while Chow calls Hawaii home. For both, golf was a definitive piece of summer, but the course for each was not the same.

Wedel took up golf after watching his father’s love of the game. His father, Frederick Wedel, picked up clubs in his 20s and fell in love with the sport. Wedel followed his father to the driving range and picked up a knack for his father’s favorite sport.

His love for the green took Wedel to six states in the last two months of summer. Finally, it led him to the biggest stage of his career, the U.S. Amateur Championships on Aug. 16.

Wedel surpassed his original goal of making it to match play, a level only 64 of 2,012 golfers achieve. Wedel made it not only to that high level but also to the semifinals where he lost to San Diego State’s Gunn Yang’s 19th hole birdie.

“The highest part of the tournament was the semifinal match because there was so much on the line,” Wedel said. “The most challenging was handling defeat afterwards. It was heartbreaking. It was once in a lifetime. You only go through that emotion one time. You are only thrown into that first-time pressure on national TV once in your life.

Wedel entered the competition ranked 619th and swept the competition from the start. While his performance is reminiscent of an underdog story, his two years at Pepperdine boast many accolades including a second Wave team finish, 73.42 scoring average and a 66th place finish at the NCAA Regional competition.

After that bittersweet Amateur showing, Wedel intends to use the momentum to win meets, finish top 20 at Nationals and earn an All-American first team spot.

Chow will likely achieve similar heights in the women’s golf arena. She was named a two-time All-WCC first teamer and ranks ninth in school history with 14 below-par rounds. She also competed this summer in the U.S. Open.

“I’ve never experienced anything like it,” she said. “Hopefully I can return one day. When I watch the professionals on TV, it is entirely different from when we play side by side. It shows me that it is possible to golf for a living.”

Family played a major role in Chow’s golf upbringing. Her auntie, Lenore Rittenhouse,  went to college on a basketball scholarship but picked up golf to pass time during an injury. She joined the golf team and went on to play professionally soon after. Then Chow’s mom began to play, and that love was passed down to Chow at a young age.

“I was never forced to do it. I just loved it from the start,” Chow said.

The U.S. Open was the only competition Chow competed in this summer. She spent most of her summer relaxing and hiking in her backyard in Honolulu, Hawaii.

When asked about her goals and her future in the sport she loves, Chow said she is hesitant to make goals out of numbers and statistics.

“Sure, I’d love to win tournaments,” she said. “But I know I will always put in my best effort. I don’t want to be cocky because when you get like that, you get lazy.”

Chow said she believes golf has taught her the importance of having a clear and resilient attitude above all else on and off the green. Rittenhouse has influenced Chow’s ability to stay tough and optimistic on the toughest of courses.

“I asked my auntie to caddie me. I was doing terrible and had a bad attitude,” Chow said. “My auntie dropped my bag and walked off the course. It was then I realized only I controlled my performance and attitude and results.”

The green has been a place of pressure and triumph, lessons and frustration for both Wedel and Chow.

At the end of the day they are the last ones standing on the course. What sets them apart is that they don’t forget the team, family, friends and school that they proudly represent.

“I can’t believe all the support I got from friends and family,” Chow said. “I didn’t know so many people kept up with golf.”

Wedel said he felt the same about his support system.

“If anything, I want to thank Pepperdine and my family,” Wedel said. “It really was special for everyone to have my back and root for me.”

The murder of Michael Brown in the municipality of Ferguson, Mo., has brought to light what has been clear as day to those...
Copyright 2013 Jupiter Premium Magazine Theme
Back to top