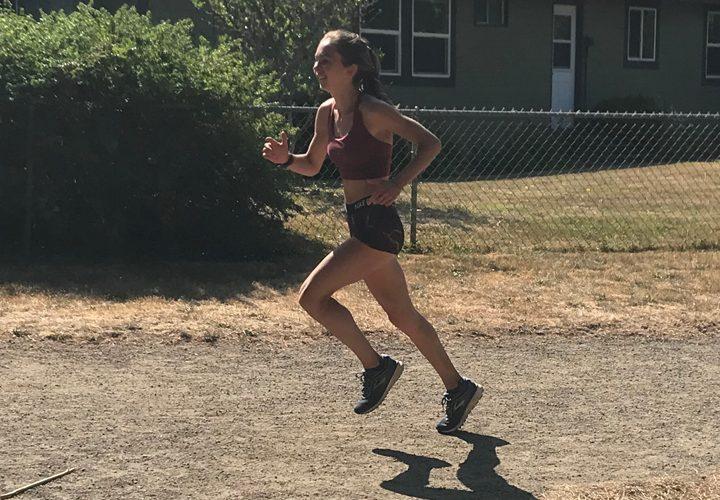 Junior cross country and track runner Key Pearson trains at home in Bainbridge Island, Wash. Pearson and many of her teammates continued to train in a socially distanced fashion while living off campus in Malibu. Photo courtesy of Key Pearson

The West Coast Conference fell in line with many other conferences Aug. 8, postponing the fall sports season due to COVID-19. This left many Pepperdine athletes little time to readjust to the late announcement.

The University is not allowing student-athletes to live on campus unless they provide reasons that grant a hardship exemption. The student-athletes not living on campus are setting their own training schedules to stay in shape and get a head start to the adjusted fall season.

“I’m really grateful to be in town with so many of my teammates,” junior cross country runner Key Pearson said. “We’re going to do a lot of mock races and training together to get ready for the spring.”

Pearson, a cross country captain, said that hearing the announcement was heartbreaking.

“Even though I knew it was coming, it was really hard to process,” Pearson said. After dedicating my summer to getting better, it was put to a stop automatically. I was super unmotivated and didn’t stick to our training schedule. I took a couple of days to reflect on what I was going to do next.”

Pearson said that her outlook changed when she moved back to Malibu. A total of 19 runners found living arrangements in Malibu, over half of the men’s and women’s team rosters.

Although no official team meetings can be held, Pearson said the team is taking advantage of its time together.

“We’re running one to two times per day,” Pearson said. “Groups who don’t live together are social distancing too. Everyone has a running buddy or someone whom they’re in regular contact with, so while we meet at the same spot and talk about where we’re going to go, we’re doing it in the safest way possible.”

Pearson said that despite the cross country season being lost to the postponement, the team still has goals in mind.

“We’re continuing as if there were a season,” Pearson said. “We’re still going to push each other and have some fast times this year.” 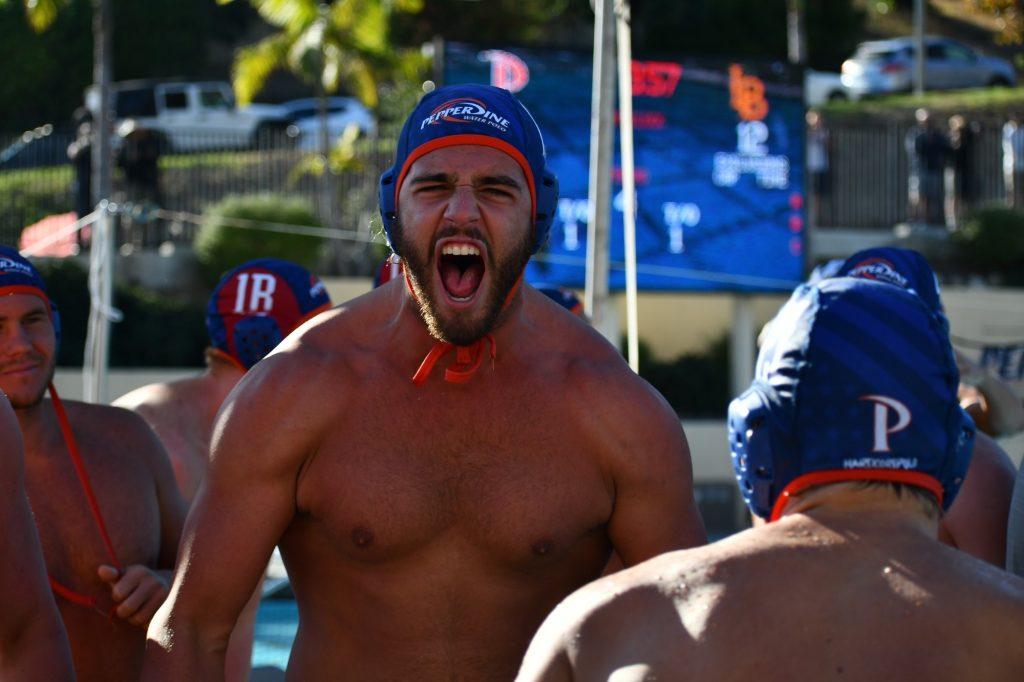 Senior water polo center Coleman Carpenter celebrates on the sideline after a Pepperdine goal versus Long Beach on Nov. 24, 2019. Carpenter and some of his teammates have been able to train periodically at an off-campus facility. Photo courtesy of Coleman Carpenter

As a member of the defending Golden Coast Conference champions, he and the rest of the team would regularly be competing in an annual summer tournament comprised of all six conference teams.

The conference, which operates outside the WCC, postponed the water polo season in July.

Much of the team is living in the area, from eight players in Agoura Hills, three in Malibu and six who are on campus. Carpenter said he and his roommates — Ian Holder, transfer Spencer Tybur and two-time All-American Balazs Kosa — found a way to train on their own.

“We found this pool at an Agoura Hills country club,” Carpenter said. “There’s a $5 fee for non-members, and they’ve been great about letting us be there. It’s full-sized with lanes, so we’ve been able to throw the ball around. The upperclassmen are starting to put together a team-led practice.”

Before the WCC officially postponed fall sports to the spring, Sport Administration professor and former Pepperdine Director of Athletics John Watson voiced his concern about not having the facilities capable of housing two full-season lineups at one time.

Carpenter said being one of two aquatic sports at Pepperdine would not have a huge effect on the team’s scheduling.

“Water Polo and Women’s Swim and Dive do a lot of stuff in the offseason and are normally really good about splitting pool time,” Carpenter said. “We’ve heard from the coaches that spring sports will get priority, but we’re not too worried about our games being changed around that much.”

Carpenter said his hope for the spring season is that the team can go about the return safely and efficiently.

“We need to make sure to follow all protocols in front of us,” Carpenter said. “It can look easy to rush back into it whenever we get the green light, but a lot goes into a daily Division I sports regiment, so we’ll have to stay cautious.”

A Pepperdine team that isn’t benefitting from the majority of the team living in the Malibu area is Women’s Volleyball.

Senior outside hitter and captain Shannon Scully said traditionally, not being able to live on campus wouldn’t significantly impact the team, but this season is an outlier.

“Usually, it’s about 50/50 from players who live on campus to players who do not,” Scully said. “This year, only four players, including myself, had a spot lined up going into the summer. It will be good whenever they’re allowed back because they can jump straight into training, but as of right now, the entire team is at home.”

Scully said COVID-19 protocols could change the majority of practices.

“Once we’re allowed to come back to campus, we’ll get tested then be quarantined for three to five days,” Scully said. “After the results, we’ll jump into conditioning and weightlifting with no volleyball activities. They’ll also group us by who we live with for workouts, meaning the entire team won’t work out together for weeks.” 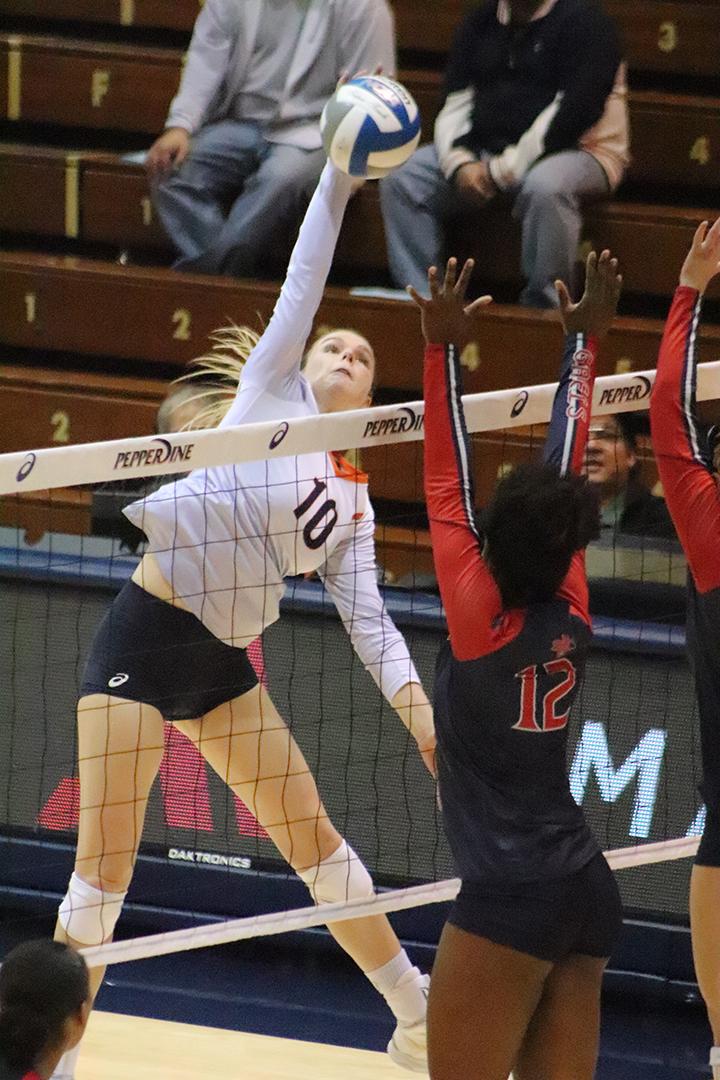 Senior outside hitter Shannon Scully takes a swing against a Saint Mary University blocker during a Nov. 14, 2019, game at Firestone Fieldhouse. Scully is one of only four women's volleyball players who planned to live off campus this year, so many of her teammates will not be in Malibu. File photo

Scully said her biggest concern heading into the spring season could sacrifice a postseason berth.

“What makes me most nervous is that all it takes is one person on our team to test positive,” Scully said. “And when that happens, the whole team will have to forfeit 14 days’ worth of games, which would be about four. That would hurt any team that’s serious about the NCAA Tournament.”

When the team resumes volleyball activities, the Athletic Department will have scheduling decisions to make regarding the two indoor volleyball and two basketball teams.

To avoid moving their practice back, the team has discussed practicing at Malibu High School.

Scully said she hopes the spring season pans out, as it could be her last time wearing a Pepperdine uniform.

“While I have thought about redshirting and getting my master’s at Pepperdine, nothing is for sure,” Scully said. “If I do end up playing this year, I would hate for it to be affected by so much uncertainty.”

Student-Athletes Lead the Charge for Social and Racial Justice 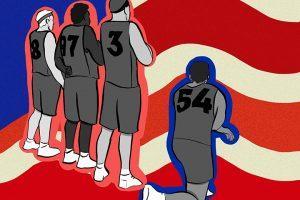 Student-Athletes Lead the Charge for Social and Racial Justice