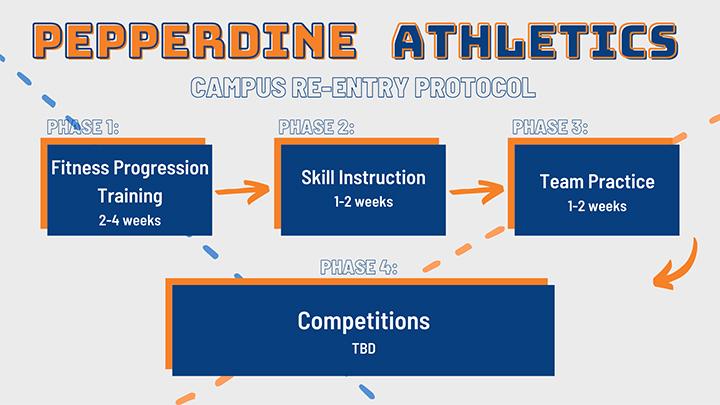 There will be no water polo, soccer or volleyball matches on Pepperdine’s Malibu campus in the remainder of 2020, but Pepperdine Athletics devised a plan that will bring its student-athletes back to training despite the lack of in-person classes.

The Golden Coast Conference, home of Pepperdine Men’s Water Polo, postponed its season to at least January 2021 in a July 31 announcement.

“This [WCC] decision, while devastating for our fall sports student-athletes, does offer the hope of competing in the spring of 2021,” Director of Athletics Steve Potts said in a Pepperdine Athletics release.

Nonetheless, Pepperdine Athletics staff and officials spent the summer creating a plan that would adhere to all COVID-19 restrictions and allow the Waves to return to training and eventually practice and competition.

The WCC did not prohibit schools from competing in non-conference competition in low-risk sports. It also intends to hold a conference basketball season in the winter. Additionally, there may be opportunities for Pepperdine tennis players and golfers to compete in fall tournaments.

“We’ve had this plan that we’ve worked on for months,” Potts said. “Now we’re ready to try to implement it [and] see how we can make it better.”

“[Wright and Green] came up with the phased approach based on guidance from the NCAA’s Resocialization of College Sport document, which continually gets updated,” Deputy Director of Athletics Karina Herold said.

Green is also the medical director for Major League Baseball, so his experience coordinating MLB’s return to play, in conjunction with the White House Coronavirus Task Force, provided invaluable information.

“The University was heavily involved in not only the development of our plan but also the approval,” Potts said.

The 34-page Athletics Re-Entry Policies and Protocols document details campus re-entry protocol, isolation protocol in the event of a positive COVID-19 result, housing and athletic facility restrictions and, most important, a four-phase approach with the end goal of returning student-athletes to competition.

Once a student-athlete is tested for COVID-19 on campus, quarantines until their test result arrives and receives a negative test result, they can enter Phase I of the protocol — fitness progression training. This phase, which is intended to last two-to-four weeks, includes access to strength training coaches and outdoor strength and conditioning facilities but no group sessions or in-person meetings with other coaches.

Phases II and III, each of which are proposed to last one-to-two weeks, include skill instruction with one coach and then a return to full-team practices. Phase IV would indicate preparedness for team competition, though there are no team competitions currently on the horizon in fall 2020.

The return-to-campus protocol was first released to student-athletes July 16, but the date on which Phase I can begin remains to be seen, as accessibility to campus has been delayed due to the lack of updated guidance from California and Los Angeles County public health officials.

California did not release COVID-19 prevention guidance specific to colleges and universities from mid-March until Aug. 7, putting schools in a precarious position regarding move-in policies.

Updated Los Angeles County guidance, which may be more restrictive, has yet to arrive.

“We’re in a difficult spot because we are in Los Angeles County, which is considered a hotspot,” Herold said. “Until [COVID-19] can calm down a little bit, we have to do what we’re told by the Department of Public Health, and we will do that.”

Los Angeles County has more than 200,000 confirmed cases of COVID-19 and over 5,000 deaths, while the City of Malibu itself had only 86 cases and two deaths since testing began in April, as of Aug. 12.

Due to the delay between guidance documents, Pepperdine Athletics had no choice but to interpret the March guidance, which limited students on campuses to those who demonstrated a need to remain there, beyond the need to train for sports.

“Unless you had an extreme hardship, or you’re an essential employee, all campuses should remain closed,” Herold said.

The department informed student-athletes who were initially granted housing exemptions that they would have to fill out a hardship form if they were to be able to live on campus. Some student-athletes were granted another exemption to remain on campus, but not all.

California released the new guidance for institutions of higher education mere hours after student-athletes were informed that they may not be able to live at Pepperdine.

The student-athletes who moved onto campus Aug. 12 were tested for COVID-19 upon arrival and placed in isolation housing until the test results arrive.

Pepperdine Athletics is using Vault Health saliva test kits, and the department also plans to test student-athletes and staff for antibodies during Phase I.

Student-athletes who live off campus are not yet allowed to come to campus for training, meetings or even COVID-19 testing.

“As soon as we get word that the campus can open — not for classes but can open up a little bit more — then we’ll start Phase I,” Herold said.

Some facilities staff and occasionally other staff members will work on campus, but meetings and other functions of the department remain remote only.

Athletic trainers and sports performance staff have already taken at least one COVID-19 test, Herold said, in anticipation of the arrival of student-athletes.

“That’s the plan,” Potts said. “The California state requirement there virtually mirrored the NCAA requirements, so we were bound to do that anyway.”

Once Phase I begins, Herold said the most disciplined teams will be the most successful in the age of COVID-19. She is confident that Pepperdine’s protocol prioritizes health and safety, but each student-athlete and staff member must buy in.

“All it takes is one person who has a lapse of judgment […] to potentially spread the virus among teammates or classmates,” Herold said. “So what we’re asking of our student-athletes is to be diligent and to be disciplined. If we want to come together and be together and train together and practice together and eventually compete together, we have to protect each other.”