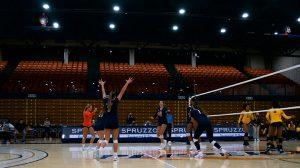 Women’s Indoor Volleyball dominated their last pre-season opponent in a win over VCU. The Waves are now in the midst of conference play, and will look to build off their early-season momentum.

The Pepperdine baseball team has started their season in championship-like form with a four-game win streak. The Waves opened up the season at Eddy D. Field Stadium taking two of three games in a series against the Oklahoma Sooners the then-No. 14 ranked team in the nation. The streak was highlighted by a 10-0 victory […]