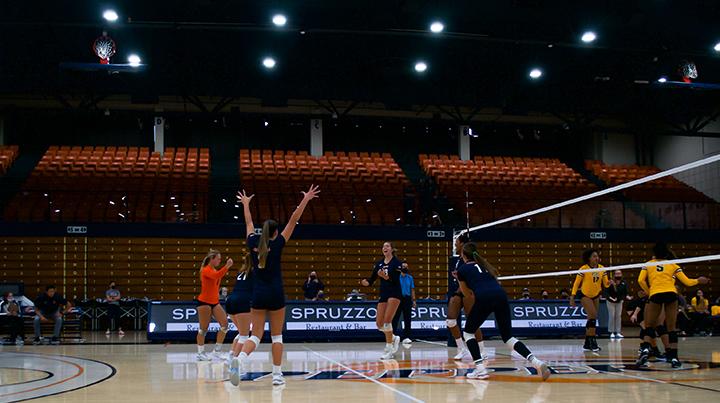 The Waves celebrate after a kill by Rachel Ahrens. Pepperdine finished non-conference play with a dominant win against VCU on Sept. 16. Photos by Ashton Bell

Pepperdine earned a victory in convincing fashion (25-23, 25-16, 25-21) over Virginia Commonwealth University on Sept. 16, at Firestone Fieldhouse, sweeping the sets 3-0.

With this win, the Waves finished with an impressive non-conference record of 8-1, as they headed into conference play Sept. 23.

“I’m looking forward to the first WCC championship with me being here,” sophomore middle blocker Meg Brown said. “I think we have the ability to do it and we are ready to go.”

Previously the Waves played Cal Poly, another out-of-conference opponent, at home Sept. 12, and won a nail-biting game in five sets, 3-2.

“I am really happy with our pre-season record and I think it’s a good telling of how conference should go and we are all pumped up,” senior libero Madison Shields said.

The first set was the closest against VCU, as the Waves were up 22-20 before Head Coach Scott Wong called a timeout. Senior outside hitter Rachel Ahrens ended the set with her fifth kill of the game. Freshman outside hitter Grace Chillingworth contributed four kills as well.

Pepperdine did not trail in the first set, but the game still went back and forth. After the timeout, the Waves put the first set away, winning 25-23.

“Hitting our serve was something we really focused on and they knocked VCU off the net and they listened and did a good job serving,” Wong said.

The second set was more of a blowout when the Waves got out to a hot start. After about five minutes, the Waves were already up 12-4. The score was then 15-10, after some VCU attack errors, then Pepperdine went on a 5-0 scoring run, making it 20-10.

VCU passed the ball into the ceiling after an attack error where it got stuck and earned a point for the Waves. Chillingworth and Ahrens led the way with four kills each. Pepperdine closed out the second set 25-16 and headed into the third set up 2-0, feeling confident.

The Waves got off to a slow start during the third set, and it was with Pepperdine leading 16-15 when Wong called a timeout to rally the team. The team was giving up some easy points on service errors, so Wong said he wanted to get things together. The score was 23-20 and the Waves were looking to close it out when VCU called a timeout.

“Just playing free and playing our volleyball was the biggest key to success tonight and we didn’t let what they were doing affect our game,” Brown said.

The Waves would put it away 25-21, as Ahrens got the last kill of the game, leading both teams with 17 kills.

“When they were pushing back we were still able to find a rhythm and get out of tough situations,” Shields said.

The Waves defeated San Francisco (0-10) on Sept. 23. Pepperdine swept the sets 3-0 as Ahrens led the team with 16 kills. Pepperdine’s next opponent was Santa Clara (4-8) on Saturday, Sept. 25, where they went down 2-0 before coming back to win the fifth and final set, securing the win.

The Waves next played Tuesday, Sept. 28, against the University of Portland at home and won 3-0 making them 11-1 on the season. Pepperdine’s next opponent is Loyola Marymount on Saturday, Oct. 2. Go Waves!