The Pepperdine baseball team has started their season in championship-like form with a four-game win streak. The Waves opened up the season at Eddy D. Field Stadium taking two of three games in a series against the Oklahoma Sooners the then-No. 14 ranked team in the nation. The streak was highlighted by a 10-0 victory Saturday afternoon against the Sooners. The team followed that performance by taking care of business and sweeping the two-game series against the Virginia Commonwealth Rams. 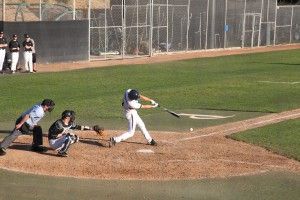 In their series against the Colonial Costal Association participant VCU, the Waves took their first series sweep of the season. The Waves were lead by a dominating eight-inning performance from pitcher Corey Miller and some healthy bat support from guys like junior short stop Zach Vincej who provided three hits on four at bats in a 6-1 game one victory over VCU. The very next day, yesterday, the Waves pitchers and batters came through again providing 11 runs and limiting VCU to two runs.

Starting pitcher Matt Maurer did not allow a run through his five innings of work and senior first baseman Miles Silverstein continued his hot streak hitting a home run in each of the VCU games.
The Pepperdine baseball team gained momentum for those games after their impressive work against the Sooners — a series that saw exciting performances.

Even in their 4-3 season opening loss to Oklahoma, the Waves’ young starters silenced any worries of a slow start with all three first years getting on base. This includes: center fielder Matt Gelalich (two hits), left fielder Bryan Langlois (one hit), catcher James Grandpre (one hit) and right fielder Aaron Brown (one hit & one RBI). The wins are a feat that Head Coach Steve Rodriguez acknowledged as “a carryover from their efforts during summer league.”

The Waves took the momentum from that game and truly blossomed in their Saturday performance against Oklahoma. The team dominated the Sooners with a 10-0 victory. The hitting was strong, producing 14-hits lead by freshman Aaron Brown who had three hits and three RBIs and All-WCC pre-season team recipient Joe Sever who contributed three hits and two RBIs.

Also notable was the performance of the pitching staff. The Wave’s pitchers performed phenomenally, led by one of last year’s WCC All-Freshman Team awardee, Scott Frazier. Frazier provided seven impressive innings of work with six strikeouts and a shutout to that point in that game. For his performance the sophomore received WCC pitcher of the week honors. Frazier, who was pulled after seven innings can thank the relief work of junior Brian McIlhenny, and freshman Matt Snider who did not allow a hit for the remainder of the game and did not allow a run to score, making their Feb.18 victory the first shutout for the Waves. 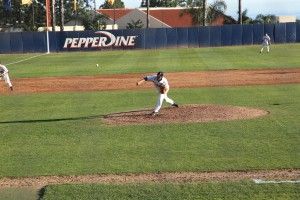 Courtesy of Rachel MilleWaves since May 21, 2011, in a victory over Gonzaga.

The Waves Sunday performance showed the team’s grit and fortitude. In addition to pulling off a colorful 80s throwback uniform look in honor of Pepperdine’s 75th anniversary, the Waves also dug themselves an early hole being down 3-1 after the first inning. The team was able to overcome this thanks to their bats producing 11 hits. Pepperdine had a big contribution from many starters, notably red-shirt freshman and left fielder Bryan Langlois who produced two RBIs on a home run, the first of the season for the Waves and also red-shirt senior and designated hitter Matt Forgatch provided help with a home run, with two hits, and one RBI.
Despite all the positives there are still things for the Waves to improve upon. In pitching, starting pitcher Corey Miller admits, “It is important for [him] to keep the ball down when pitching.” Something Rodriguez also reiterated.

The Waves have four more games at home with their next three against last year’s NCCA tournament participant Fresno State tomorrow at 2 pm. The Waves will then compete against cross-town foe USC in a one game matchup on Feb. 28 at home.

If it wasn’t for his father’s dedication, second basemen junior Joe Sever may never have gotten as far in baseball as he has. During...
Copyright 2013 Jupiter Premium Magazine Theme
Back to top