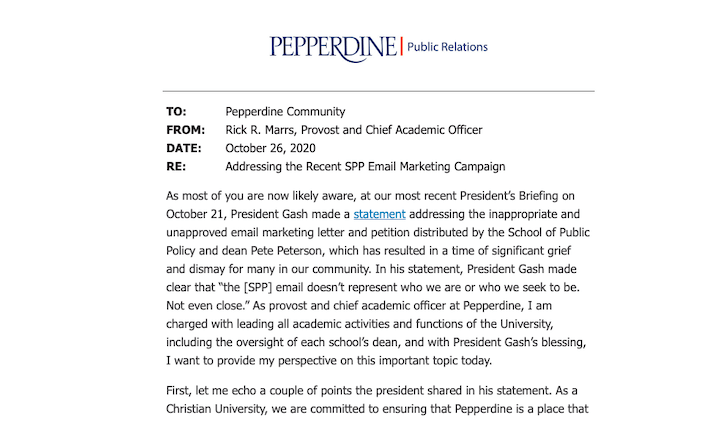 Dean Pete Peterson sent the Oct. 12 School of Public Policy campaign, which stood against “far left indoctrination” and The New York Times’ The 1619 Project. This campaign received vocal reactions from the Pepperdine community both against and in support of Peterson’s message, causing controversy in the University as a whole. Marrs’ email clarified Pepperdine’s position on the email campaign, its commitment to non-partisan affiliation and an affirmation for inclusion and respecting diverse viewpoints.

“In its best moments, Pepperdine is not only a place of welcome, but a community that honors the story of each of its members,” Marrs wrote. “We believe compassion, empathy, empowerment, and advancement of the marginalized are called for if we seek to cultivate a genuine community of belonging here, and we are fully committed to creating an environment where everyone’s story is heard, valued, and engaged.”

Marrs began by reiterating Pepperdine is a place that welcomes diverse perspectives and discussion around controversial topics in an environment where everyone is treated respectfully. This campaign, however, fell short of meeting Pepperdine’s standards and expressed partisan political views with divisive commentary paired with a call to action — all of which appeared to be expressed by Pepperdine as an institution, Marrs wrote.

The language used, in particular, was divisive and disheartening to many in the Pepperdine community, as some of the phrasing is affiliated with racist groups, Marrs wrote. The campaign’s content and rhetoric suggested Pepperdine may hold similar racist views and seek to diminish people of color, though that was not the intent of the messaging, Marrs wrote.

“Allow me to say unequivocally that such views are neither espoused nor condoned by the University,” Marrs wrote. “We condemn all forms of racism, and we hear the anguish of our Black students and colleagues and stand unitedly with them.”

As a community of faith, Pepperdine strives to to create an environment of belonging and inclusion, Marrs wrote.

“In this present context, we have affirmed our commitment to creating a community that refuses to suggest that more fully including the story of our colleagues and students who are Black or people of color is un-American or unpatriotic, or that our acknowledgment of slavery as a significant element of our national story threatens us,” Marrs wrote.

Marrs also acknowledged the difficult circumstances staff, faculty and students face currently in the midst of COVID-19 and remote instruction and how this campaign has compounded on community members.

“That we must also now address these recent events, which have caused many of our colleagues and students to feel marginalized and less welcome at the Pepperdine table, is lamentable,” Marrs wrote. “I cannot overstress our regret in this moment and commit to those experiencing sorrow that as leaders in this community we will do everything we can to rectify that.”

President Jim Gash addressed the email and petition during his Oct. 21 President’s Briefing, stating Pepperdine’s commitment to remain unaffiliated with political parties or messaging. Peterson also issued an apology during the Briefing, taking full responsibility for the inappropriate copy and content.

Many at Pepperdine, however, were not appeased by Gash and Peterson’s statements given at the Briefing. Two anonymous community members submitted statements to the @BlackAtPepperdine Instagram account, sharing their disapproval.

“The SPP Dean’s apology today during the President’s briefing felt so insincere and Pepperdine as an institution seems to be condoning this behavior by choosing not to release an official statement,” according to an Oct. 24 anonymous submission. “This could’ve been a great example of a time when Pepperdine could have chosen to rise above the hate and division, but the admin up top seem to have decided to not treat this issue as seriously as it is. As a student, I feel so disappointed and let down.” 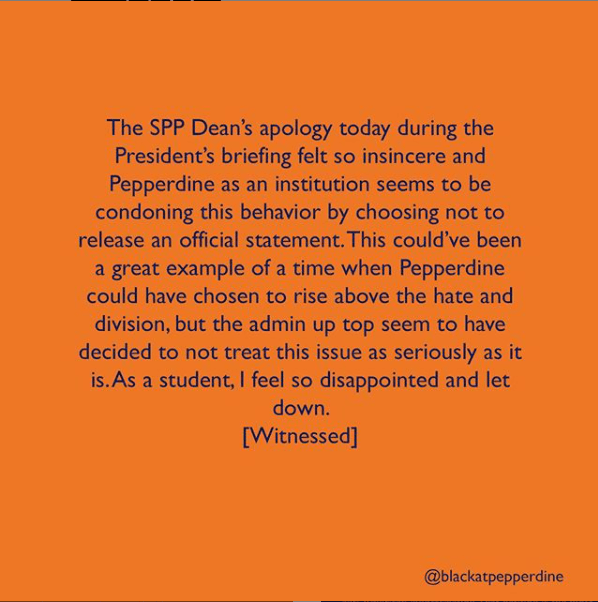 Administration is in the process of creating opportunities for healing and unity, Marrs wrote, and both he and Gash are reallocating resources to provide the community with meaningful action and discussion. More specific information will come from Gash later this week, according to Marrs’ email.

“Today, as your academic leader and on behalf of this institution we love, I profess to those hurting in our community our commitment to even more diligently create a community where all, and especially at this moment those who are Black and other people of color, are not just made to feel welcome but respected as children of God whose stories are honored,” Marrs wrote. “A central element of Pepperdine’s rich heritage is that we embrace all who desire to be a part of our welcoming community, and we will continue to work to earn your trust as we provide an extraordinary academic experience for our students that enables them to serve a hurting and divided world.” 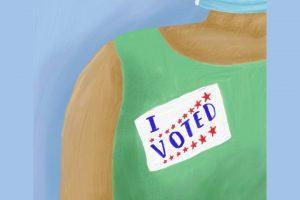 Art by Gabby DiGiovanni With Election Day next week, many social media users are calling for their peers to vote in the presidential...
Copyright 2013 Jupiter Premium Magazine Theme
Back to top