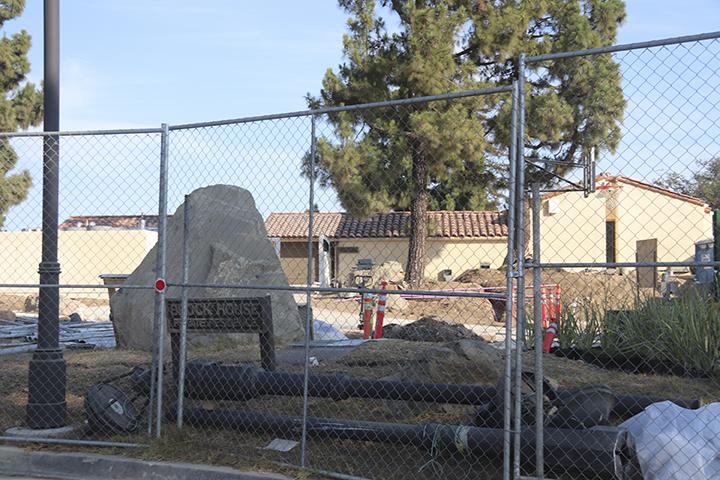 The Brock House stands mid-renovation Aug. 16, 2020. President Jim Gash moved into the house in September and said he looks forward to hosting a variety of student events there. Photo by Ali Levens

President Jim Gash and his family moved into the newly renovated the Brock House in late September and look forward to hosting student events as soon as LA County health guidelines allow.

The Brock House was built during the original Malibu campus construction in 1972 and did not undergo any extensive renovations until this project, said Ben Veenendal, associate vice president of Planning, Operations and Construction. As a result, systems and infrastructure required extensive updates and the construction team reworked the space to improve event functionality.

“My plan, my desire, is for the Brock House to be a grand central station for things happening,” Gash said. “Joline and I, we just love being with students. And it’s always been that way and always will be that way. Hosting people in our home is one of our greatest pleasures.”

To better facilitate events held outside, Veenendal said the construction team added direct bathroom access from the backyard, an accessible ramp at the main entrance and an accessible bathroom. They also made the entire perimeter of the property wheelchair-accessible — which also enables easier backyard access to caterers.

Students called Benton the “Students’ President” and he hosted many student events at the house, such as the NSO-week President’s Reception for new students and Rock the Brock for departing seniors. Gash said he hopes to continue this legacy because he believes it is key to forming connections with students.

“It’s really important for me for students to have a sense of belonging here at Pepperdine and the way that one does that is connectedness to other people — to fellow students, to faculty, to staff, to the administration,” Gash said. “I want people to feel like there’s something to do in Malibu on Friday and Saturday night.”

Gash said he and his wife, Joline, hope to host a weekly worship gathering and game nights, as well as welcoming student groups, faculty and staff to hold other events at the Brock House.

“It’s going to be party central Malibu,” Gash said. “Not party central in the way some people think of partying — but for social and spiritual life.”

Events and gatherings at the Brock House are only one piece of Gash’s plan to improve student activities. Gash hopes to begin construction on the Mountain, a proposed student event and recreation center, to serve as a hub for student life.

“The Mountain is this complex, this village, of vibrant social, spiritual, recreational [and] food life,” Gash said. “That’s coming. But until that comes, and in addition to it coming, we want to find ways for people to feel connected to each other.”

Gash said the Brock House can serve an important role in spiritual life, as he believes community is key to spiritual growth and development.

Gash was able to host one reduced capacity, socially distanced worship event — The Gathering — last semester that was open only to students living on campus, he said.

“It was one of those, ‘OK, finally we’re able to do something like this,’ but it left us wanting,” Gash said. “It was great for 25 people to be there but that’s not the kind of energy that can be developed through a larger group of folks. And being able to hug and high five.”

As soon as allowed by LA County regulations, Gash hopes to welcome students back to campus and to the Brock House.

“I look forward to unmasked, unbridled worship and fellowship time together,” Gash said. “That’s what I’m most excited about.”