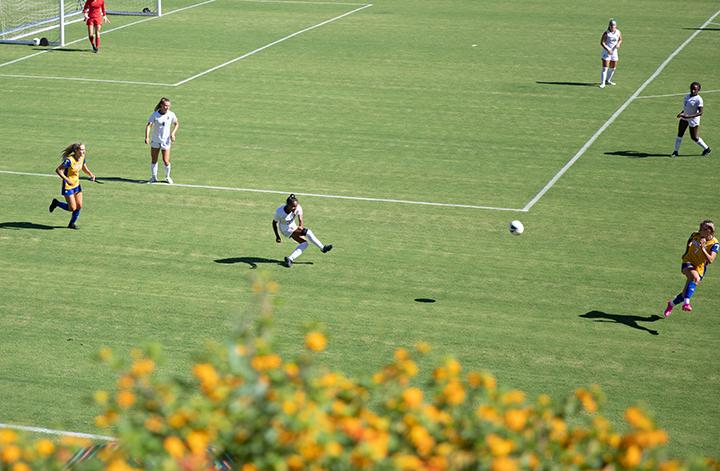 Pepperdine Women’s Soccer took care of business Sunday afternoon versus UC Santa Barbara with an impressive display of defense and a well-balanced offensive attack. Pepperdine quickly gained control of the game with two quick goals in the first half followed by a third goal minutes into the second.

“I think our preparation is very similar to non-conference games and conference games,” redshirt freshman goalkeeper Tia Harrison said. “At the end of the day, we’re all on a mission and we all have standards and goals, but every game presents a new challenge, and I thought the other team did a very nice job today so we’re ready and we prepared well this week.”

What was suppose to be a close, competitive game quickly became the opposite, as Pepperdine took control early with two quick goals within the first fifteen minutes.

The first goal was scored by the senior defender Trinity Watson on a free kick from the left corner. Pepperdine drew a foul and Watson was able to take advantage of the moment.

Sophomore midfielder Tori Waldeck set up redshirt senior midfielder Joelle Anderson for the second goal a minute later. Pepperdine found themselves in a quick transition opportunity, and as Waldeck raced down the field, she set up Anderson who passed the goalie and found the bottom of the net.

“I just saw Tori get the ball wide,” Anderson said. “I kinda faded away because I saw my player going towards the goal and she played an amazing cross across the goal line and I had to put it in the back of the net, but it was an awesome job by Tori.”

Pepperdine never looked back as the Waves remained aggressive on offense, registering a total of 17 shots and keeping the Gauchos defense on their heels all afternoon.

“I’m so proud of how we came out and scored our goals and showed what it was like to be part of this program,” Anderson said. “I think we’re doing an excellent job starting off strong and I think we’re going to keep on rolling and have a strong start to the season.”

The third goal came in the 55th minute, when redshirt senior defender Calista Reyes received the pass from Anderson and was able to find the opening in the middle, effectively finding the bottom of the net.

Pepperdine continued to put the pressure on the Gauchos throughout the second half, as they attempted 14 shots.

The fast-paced offense set the tone for the rest of the game. Pepperdine utilized what’s known as a 4-4-2 offensive formation, which stretches out the field and gives the strikers more space to maneuver.

Throughout the game, the Waves were able to control the ball on the offensive side, and never allowed the Gauchos to get into its offensive rhythm by limiting their movement to just beyond the midfield line.

“Sometimes the best defense is the ball,” Head Coach Tim Ward said. “You keep the ball and the other team can’t hurt you, but even when we made the changes I think people will see that we have one philosophy and that no matter who comes on the field everyone is sort of pouring in and playing to that one vision of the game.”

The Waves are riding a five-game winning streak with an impressive 7-1-0 start to the season.

This has been the program’s best overall start since 2012 and with the past year’s shortened season due to the pandemic, players now have a full season to look forward to and take full advantage.

“We’ve gone through so much together, as a team,” redshirt freshman defender Kam Pickett said. “I’m so glad because we all have each other’s backs, we’re all sisters, we’re family, and through COVID, even injuries, all the above, we’re just pushing through together.”

The Waves will travel to Texas for a two-game road trip against the powerhouse TCU Thursday, Sept. 16 and Texas A&M Sunday, Sept. 19

TCU (7-0-0) has seen similar success to start their season so far, and with the Waves controlling their momentum, Thursday night should be very eventful.