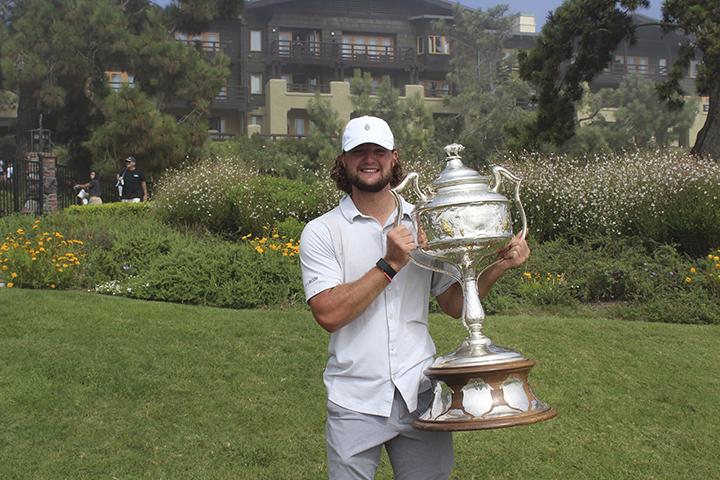 Pepperdine senior Joey Vrzich celebrates his victory at the 109th California Amateur Championship at Torrey Pines Golf Club on Aug. 1. Vrzich was one of seven Waves to compete at the U.S. Amateur Tournament the following week and one of three to advance to match play in the U.S. Amateur. Photo courtesy of Pepperdine Athletics

One month after Pepperdine Men’s Golf earned the No. 1 ranking in the NCAA, the West Coast Conference canceled spring sports entirely. With nearly three months of golf yet to be played, Pepperdine’s national title hopes were forgotten, at least for the 2019–2020 season.

The season that could have been also resulted in Pepperdine’s only National Player of the Year, Sahith Theegala, exhausting his final year of eligibility early and turning pro.

Despite the golf season’s cancellation, a whopping seven Waves — the most by any school in the NCAA — qualified for the U.S. Amateur Tournament on Aug. 10. Out of the seven, three players made it past the initial round of cuts and into match play.

Redshirt senior and all-conference performer Clay Feagler, senior Joey Vrzich and sophomore William Mouw all made it past the initial 200 cuts. The Pac-12 had three golfers total compete in match play.

“You go into the round expecting that it’s gonna be a long day,” Feagler said. “At the same time, you can’t complain or get frustrated. I just tried to keep the ball in front of me.”

Vrzich is a transfer student from the University of Nevada, Reno. In his debut season as a Wave, he averaged 70.83 strokes per round with three top-three finishes. After the stroke play on the first day of the tournament that determines individual seeding, Vrzich was in a seven-way tie for 11th place with a score of 4 under. Feagler joined him in the sizable tie and Mouw wasn’t far behind at 1 under.

While he played well enough to qualify for the second round during stroke play, Vrzich said he could not improve his play during the round of 64.

“In stroke play, I didn’t do great, didn’t do terrible,” Vrzich said. “I was OK where I ended up in the rankings. But in match play, I just didn’t play to my potential. My tee time was in the afternoon, and I had been up since 7:30 a.m. I went into the round tired — got burnt out too fast. I had a little comeback, but it wasn’t good enough.”

He lost to University of Notre Dame senior Davis Lamb by two strokes. Vrzich said he’s aiming to control his energy more throughout multiple rounds this season for Pepperdine.

Perhaps the most predictable performance from a Wave at the tournament was Mouw. Coming off his freshman season, Mouw was a GCAA/PING All-American with a 69.96 scoring average, behind only Theegala on the Pepperdine leaderboard.

He won both his round of 64 and round of 32 matchups by three strokes. Mouw said he felt that despite his score, he and Feagler were at a bit of a disadvantage.

The tournament takes place at a massive resort in Bandon, Oregon, with a multitude of courses. Each player competes on two different courses — Bandon Dunes and Bandon Trails — throughout every stage.

Dunes is a wide-open course, with little tree-line and multiple holes on the front and back nine close to the shore of the Pacific Ocean, resulting in the wind affecting a multitude of shots. Trails has far more terrain and slopes, offering many Douglas fir and whites oak trees that help with the high winds.

He and Feagler’s tee times were the disadvantages, Mouw said.

Mouw advanced the furthest out of all Pepperdine Waves, swinging his way to the round of 16. He matched up against Louisiana State University senior Philip Barbaree, and despite a strong performance, he was outshot on 11 of the 18 holes.

Mouw said it was a learning experience he’ll take with him if he returns to Bandon.

“On those courses especially, if you get good bounces, that’s huge,” Mouw said. “[Barbaree] is a great player, and we both did really solid. In the end, he got a couple more bounces than I did, and I wasn’t far off. That’s how it goes sometimes, and I’m keeping that in mind for next summer.”

Feagler, in his fifth year at Pepperdine, qualified for the tournament for the third time.

The team captain said he was proud to see seven of Pepperdine’s 10 golfers at the tournament.

“Having so many Pepperdine guys there says a lot about our team,” Feagler said. “We’ve got great depth, and the three of us that got to match play know that you can’t go out there with low effort. You play 36 holes, and the only thing on your mind is to make the cut. And when match play starts — anything can happen.”

Feagler cruised past the round of 64 before being paired against All-SEC player Sam Bennett from Texas A&M University.

“It was one of those days where your opponent is on fire,” Feagler said. “He was feeling it, no question.”

Bennett finished with a four-stroke lead, and for the second time at Bandon, Feagler lost in the round of 32.

Feagler said he enjoyed his time at the tournament, regardless.

“I still had a great time out there,” Feagler said. “It was a blast to be back on the course to compete and feel things out after some downtime. When the season was canned, a lot of time goes by without seeing the team. But we all enjoyed it, and it was great seeing everyone out there, playing some practice rounds. Just good times.”

Looking to the 2020–2021 season, Feagler said the team is poised for another historic year, but even so, the team is approaching it with caution.

“The expectation is to go out there and play quality golf and see what happens,” Feagler said. “We’re more than capable, but we’re still gonna have some competition. Arizona State is going to be really good, and Texas A&M will be right there with them. Golf is such a hard thing to predict, but whoever is playing the best at the right time can win it all.”